The forgotten story of a First World War prisoner-of-war camp in North Yorkshire has been brought to life through new research.

German prisoners compiled accounts of their experiences in Skipton’s Raikeswood Camp in a book, Kriegsgefangen in Skipton, which was published in Munich in 1920 following the prisoners’ repatriation.

An original copy found its way to Skipton Library, and had been gathering dust in a shoebox for many years.

The book provides an account of life in the camp through anecdotes, sketches and poems, and bears witness to a rarely explored perspective on the war and its immediate aftermath through the eyes of the German POWs.

Now, thanks to a research project led by Anne Buckley, Lecturer in German and Translation Studies in the School of Languages, Cultures and Societies, it has been translated into English.

German Prisoners of the Great War: Life in a Yorkshire Camp brings the fascinating account to life for new audiences a century after it was first published.

Anne said: “It has been a privilege to re-tell these men's stories a century later. The resilience and innovation of the men within the confines of captivity was remarkable.

University staff and students and local volunteers spent five years painstakingly translating the prisoners’ stories and accounts. These included descriptions of the conditions in the camp, the daily routines, their activities, relationships with the guards and their thoughts of their homeland. 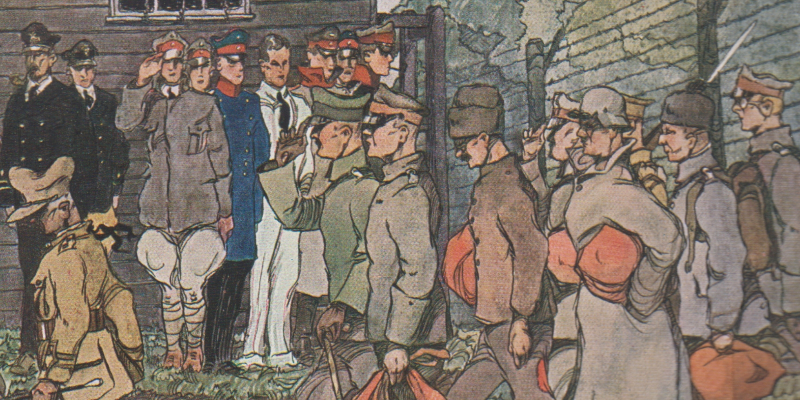 A sketch from Kriegsgefangen in Skipton entitled Arrival of new prisoners

The translations have now been published in a new book edited by Anne, with an extensive introduction based on her research into the history of the camp and the lives of the German prisoners. A full list of the prisoners is included as an appendix.

Research into the camp and the German prisoners continues through contact with descendants of the prisoners, some of whom spoke at the book’s official launch, organised by Skipton Town Hall and Skipton Library and held online on 29 April.

Actor Wolf Kahler, whose grandfather Fritz Sachsse was the senior German officer in the camp and who was the first-named author of Kriegsgefangen in Skipton, shared memories of his grandfather and read from his foreword to the book.

Sylvia Reineke, whose grandfather Heinrich Haase was one of the orderlies in the camp, talked about her grandfather’s life after the First World War and read a section from the book about the orderlies’ experiences.

Charlotte Smith and Sabine Schlüter, who were part of the team of 30 translators, discussed some of the challenges they faced when translating the century-old German text, and read an extract from their section of the book.

And Anne spoke about her role in leading the project and described the research into the camp and the men.

She said: “It has been a privilege to re-tell the prisoners' story a century later – this is an account of local, national and international history that still resonates with us today.”

Copies of the book can be purchased here, via publisher Pen and Sword's website.