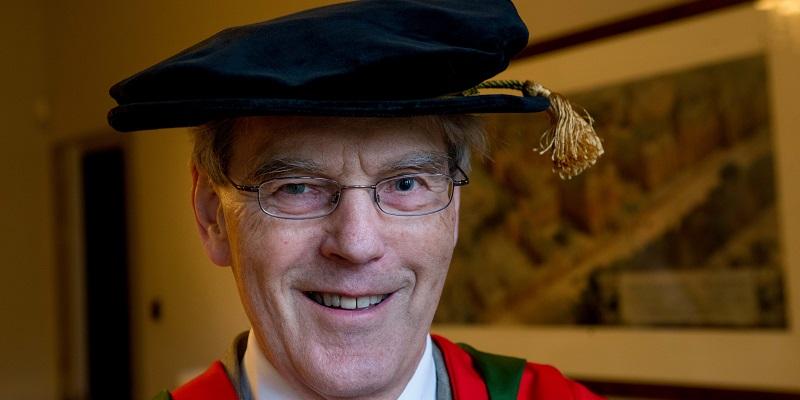 Interdisciplinarity is at the heart of modern scientific discovery, so it is fitting that today we honour Richard Henderson – a physicist who has carried out a career of ground-breaking work in molecular biology, and who was awarded the highest accolade in science – the Nobel Prize in Chemistry.

Richard is a proud Scot who was born and grew up in the Scottish borders before studying Physics as an undergraduate at the University of Edinburgh. Realising that the problems in physics that most interested him were actually of a biological nature, Richard moved to Cambridge to study for a PhD at the Laboratory of Molecular Biology(LMB), the home of the famous interdisciplinary team of Jim Watson and Francis Crick of DNA fame, where his fascination with protein structure began. After post-doctoral work at Yale in the USA, Richard returned to the LMB in Cambridge in 1975, where he has remained to this day.

Richard is a structural biologist of global repute, and has worked tirelessly to understand the three-dimensional structures of biological molecules, particularly membrane proteins, and how those structures enable biological function. This work is not only of fundamental importance, but it has direct benefits to human health since the membrane proteins that are so difficult to study are therapeutic targets for diseases spanning cancer to neurodegeneration.

Richard was instrumental in starting the company, Heptares Therapeutics which is now developing treatments for many human diseases, based on structural understanding of how a class of membrane protein known as GPCRs transmit cell signals. To deliver these insights, Richard challenged the established paradigm of using X-ray crystallography to solve protein structures, and pioneered instead the use of electron microscopy to do so.

His vision, that electron microscopy could be used to solve protein structures without needing crystals, took the best part of 40 years to come to fruition. His achievements have transformed biology, a feat that has had huge impact worldwide, and his determination to understand life in molecular detail resonates with the scientific vision of our own Astbury Centre for Structural Molecular Biology.

Richard has received many awards for his work. He was elected Fellow of the Royal Society as far back as 1983, and was awarded the Copley Medal – the Society’s highest honour – in 2016. In 2017, he was awarded the ultimate scientific accolade, sharing the Nobel Prize in Chemistry with Jacques Dubochet and Joachim Frank ‘for developing cryo-electron microscopy for the high-resolution structure determination of biomolecules in solution’;  and he was appointed a Companion of Honour last year.

Vice-Chancellor, it is a pleasure to welcome Richard back to Leeds, and I am personally honoured and delighted to present to you for the degree of Doctor of Science, honoris causa, Richard Henderson.
Back to the top