Robots rarely get a good press. They’re either turning rogue, trying to control the human race as in The Matrix, or wreaking a path of destruction to kill the hero in Will Smith’s I, Robot.

What if there was an environment where robotics and automated technology genuinely made a difference?

A world where humans were still very much in charge, but in which robotic devices made life and culture richer and more enjoyable. Where advances in science made medical procedures easier and where laborious and unpopular tasks were carried out by automatons rather than people?

Robotic technology will ultimately be of greatest use to mankind when it is enhancing our lives; improving our health by advancing medical technologies and showing us never before seen parts of the world.

This approach forms the basis of thinking every day at Leeds, developing robots able to go places humans do not want to, or cannot go.

A government-funded centre is putting Leeds at the forefront of robot design and construction, with our EPSRC National Facility for Innovative Robotic Systems based in our School of Mechanical Engineering.

The facility team regularly work closely with other schools within the University, especially the School of Computing. 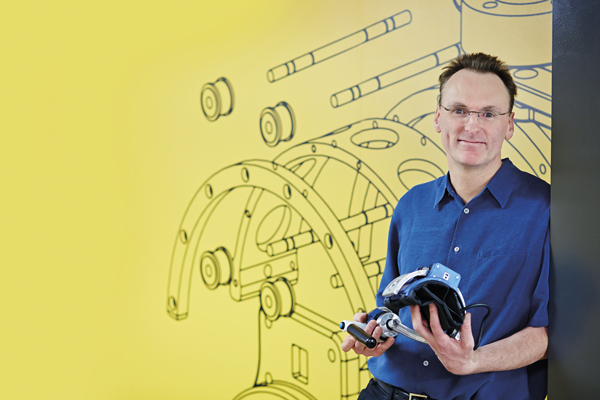 Miniature robots capable of functioning inside the human body could lead to major advances in how illnesses are treated and people cared for.

They could potentially ease painful procedures or giving doctors a better insight into how diseases have affected individual organs.

From talented PhD students to professors, researchers are working on a number of projects.

One example includes a tiny device to offer a more patient-friendly colonoscopy, to help in the fight against one of the world’s most common cancers - colorectal (bowel) cancer. 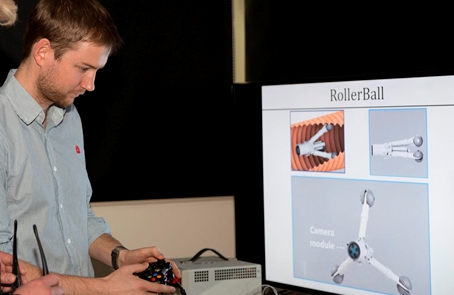 This self-propelled ‘microbot’ has reached the stage of a fully functional prototype – a novel robotic hydro-colonoscopy unit designed to ease what is often an uncomfortable procedure and increase the uptake of colonoscopies to help with the early diagnosis.

Other ideas being considered or developed at the University include intelligent prosthetics and exoskeletons, as well as a camera-carrying robot inserted into a body to improve intra-abdominal surgery - it provides doctors with an inside view.

Designed to help stroke survivors improve arms function and rebuild their strength, it guides their arm in a regular horizontal motion, similar to stirring a cake mix.

Their creation paves the way for a new model of physiotherapy, keeping professionals in touch with a patient’s progress with intensive remote rehabilitation programmes.

It eases stretched community services and relieves patients of some of the daily grind of solitary exercise and attending clinics.

This can also be programmed to carry out other manoeuvres.

Its operating system is controlled using a mathematical model of a human arm.

The forearm and hand were created using the University’s 3D printer, one of the largest multi-material printers in the world, to individually create each ‘bone’ in the hand which were then connected together, before it was put to use on the arm.

Project ALAN has reached the finals of the National Instruments Student Design Competition this year, presenting the ALAN project to industry leaders and specialist journalists.

Exploring and improving our world

Flexibility of size and design, coupled with ingenious materials which can be individually designed and manufactured, means robots can crawl, roll or climb into spaces impossible for people to get to.

With advances in photographic technology, tiny cameras can be carried, and precision engineering means they can be programmed to cut, scrape, fill, dig or apply substances.

These advances are paying dividends for the engineering community.

One of Leeds’ most inspiring project to date saw the use of a robot to explore the great pyramids of Giza, Egypt. 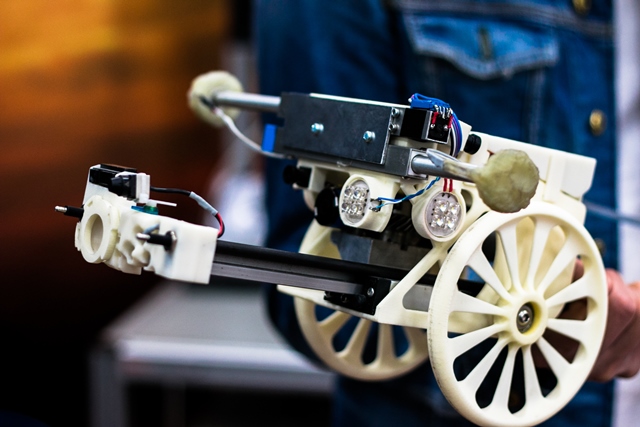 The Djedi robot, part of the archaeological expedition

Developed by a team led by Professor Rob Richardson, the robot was capable of climbing 70 metres within confined spaces of just 20cm by 20cm.

It successfully navigated the southern airshafts of one of the pyramids and used snake cameras to reveal Egyptian hieroglyphics unseen since the pyramids were built.

The 4,500 year old art provided experts with clues on how the pyramids themselves were constructed.

In addition, the robotics team is currently working with many national and international partners to better understand and protect historical structures.