The scientists with the Midas touch

Scientists at the University of Leeds have created the world’s thinnest gold, which is just two atoms thick. The breakthrough represents a landmark in the development of ultra-thin materials. 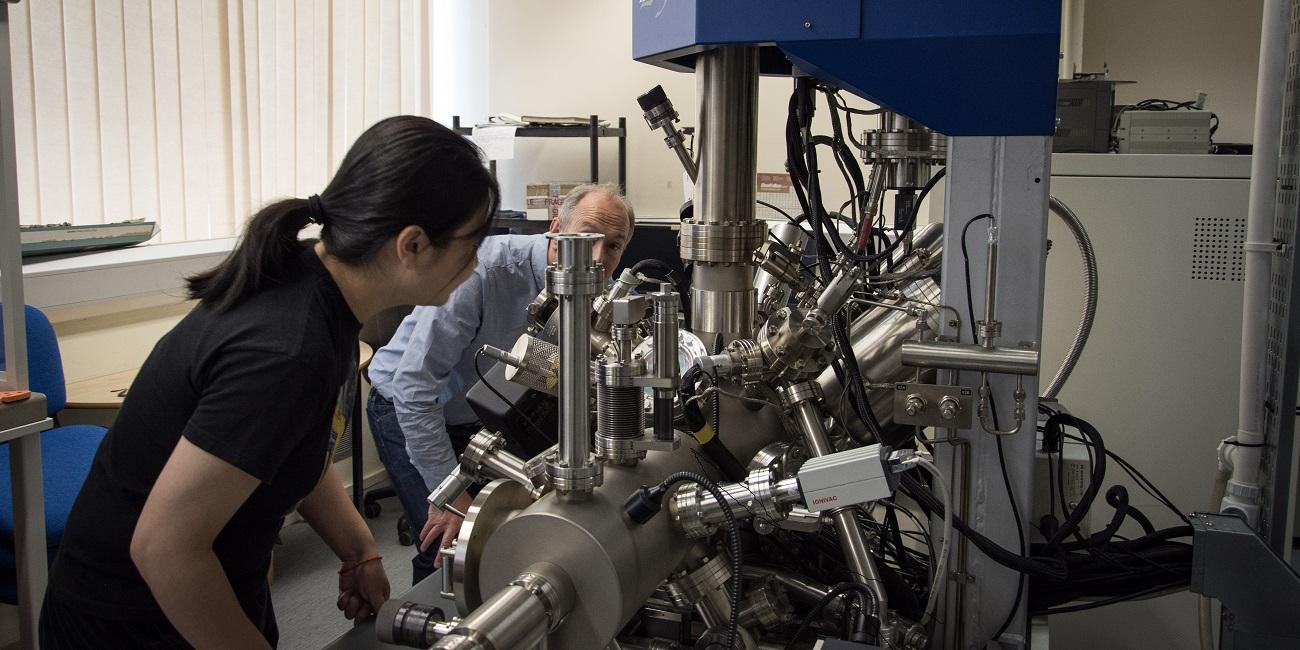 Dr Sunjie Ye has to act big to get into her very small world.

A physicist investigating the mind-bogglingly tiny building blocks of new and novel materials, she works with objects that are smaller than a nanometre, which is one billionth of a metre. To put that in context, a strand of human DNA is 2.5 nanometres in diameter.

To visualise and measure these microscopic materials, she relies on electron and atomic force microscopes, and the expert teams needed to run them and interpret the results.

The reality of nanotechnology is that to investigate the very small, you first have to get big with the equipment that allows detailed exploration of the atomic landscape.

The University of Leeds is internationally acclaimed for its research in this field. It runs the Bragg Centre, where academics from a range of disciplines collaborate on materials research. The Centre has access to some of the best facilities in the world, including electron microscopes, an x-ray spectroscopy suite and a photonics laboratory – cutting edge equipment that allows scientists to design and investigate materials of the future.

Some of the facilities at the Bragg Centre have been funded by the Henry Royce Institute, a partnership involving nine academic and scientific institutions involved in developing advanced materials. Leeds has joint responsibility for the ‘Atoms to Devices’ research theme.

Dr Ye’s discovery came as she was developing gold nanoparticles for use in medical devices.

She is a post-doctoral research fellow in the Molecular and Nanoscale Physics Group, as well as Leeds Institute of Medical Research. 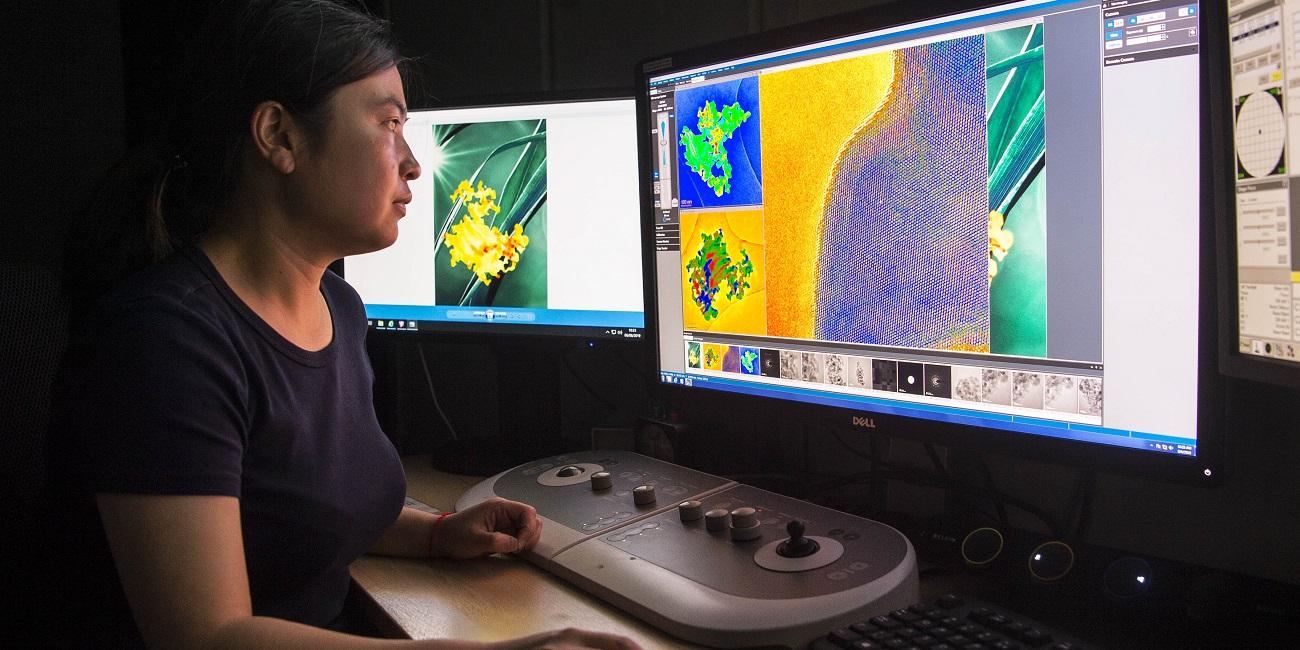 Part of her research was to identify chemical processes to fabricate new forms of gold. During that experimental work, she identified a mechanism that she suspected was producing gold that was so thin, it is considered to have a two dimensional structure – a gold particle just two atoms thick. If she was right, it would be a significant breakthrough.

At this scale, materials display new properties, opening up the possibility they could outperform existing technology, or be used in new and emerging technologies. The results were exciting.

But she needed proof.

Dr Ye says: "We had prepared a sample and under an atomic force microscope, an interesting picture started to develop. An atomic force microscope measures the mechanical characteristics of an object by running a probe across its surface, and from that data you can determine its thickness. It was indicating the thickness was composed of two layers of gold atoms aligned on top of one another.

I began to think - is this just a fluke result or have we created a method to fabricate this ultra-thin gold? I immediately set up further experiments to see if I could repeat the synthesis.

In fact, she was able to fabricate an ultra-thin gold sheet many times over subsequent weeks and months. She describes it as an act of serendipity. The researchers have now filed for a patent to protect their work.

Professor Stephen Evans, who heads the Molecular and Nanoscale Physics Group in the School of Physics and who oversaw the research, recalls: “Before you get too excited, you have to take a step back and say ‘let’s make sure there is no room for doubt’ – so we did further work both on confirmation of the structures we were producing and in extending our approach to other materials.

A lot of other people &#150; in physics, engineering and medicine &#150; came together and we were able to show that what we thought was happening was in fact happening.

The tests found that the material was 0.47 nanometres thick, made up of two atoms sitting on top of one another. It is the world’s thinnest unsupported gold particle. 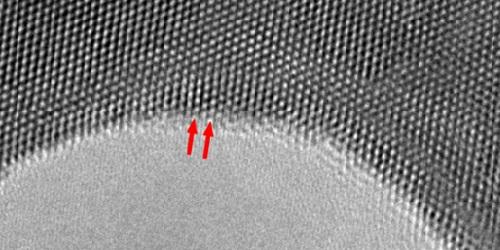 This electron microscope picture shows the lattice structure of the gold atoms. 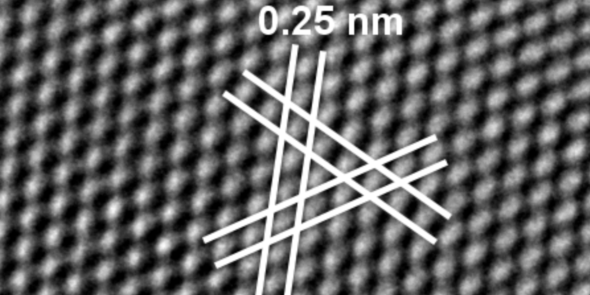 This electron microscope picture shows a close up of the atoms that make up the gold nanoparticle.

One of the other questions they faced was – is this really gold?

Because of its 2D structure – with atoms on the exterior and nothing on the inside, it had taken on a greenish colour in aqueous solution.

The scientists used high-resolution electron microscopy and x-ray diffraction to confirm that the material was indeed pure gold.

The fact that it was green and the nanoparticles were shaped like fronds, they described it as gold nanoseaweed.

A paper describing the way the gold sheet was manufactured has been published in the journal Advanced Science. 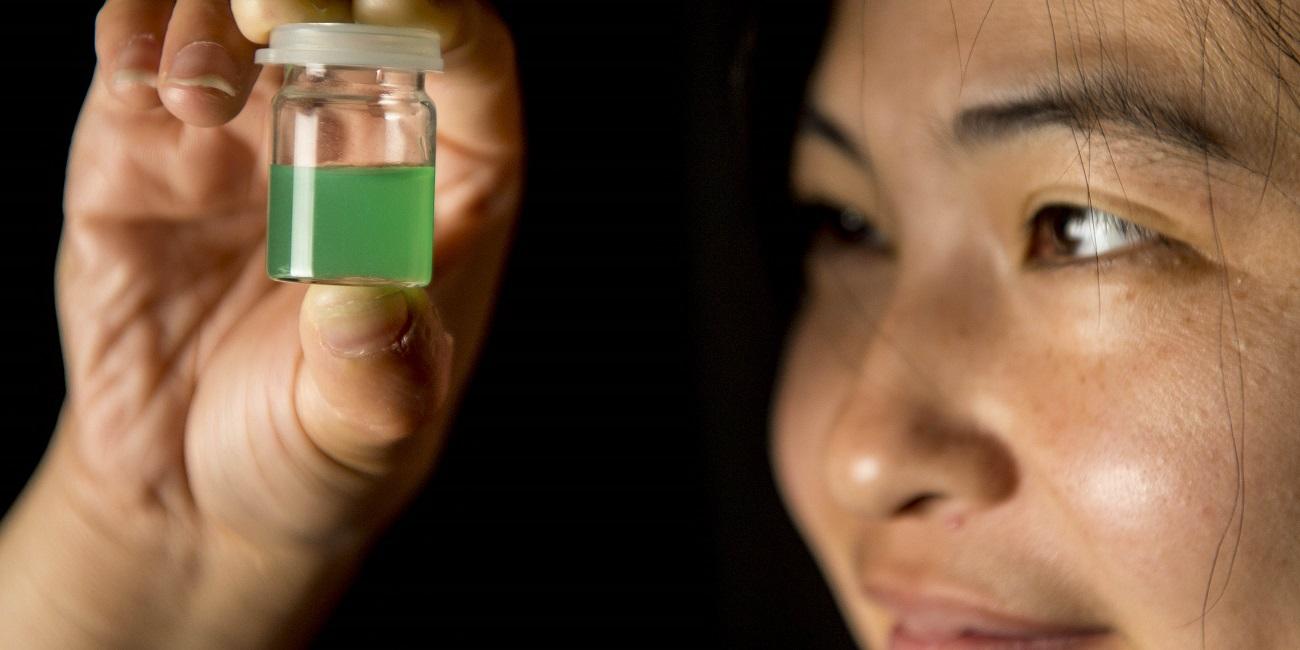 The scientists are excited about the possible applications of the material

Gold is used as a catalyst in medical devices and in a number of industrial processes. It is possible that 2D gold could replace the gold nanoparticles currently used. Because it is just two atoms thick, a greater proportion of gold atoms would be actively involved in the catalysis, making it much more efficient.

Tests at Leeds suggest it could be ten times more efficient in such applications.

Professor Evans says: “We haven’t identified all its properties as yet. That makes it exciting because there are predictions that sometimes the gold nanosheet could behave as a semi-conductor – that would mean it could have important applications in electronics.

The optical properties of the nanoseaweed are different from bulk gold. The way we harness these different properties can open up new uses. We don&#146;t know fully our direction of travel but we have some ideas. It is an exciting time.

Professor Evans thinks there will inevitably be comparisons made between the 2D gold and the very first 2D material ever created – graphene, which was fabricated at the University of Manchester.

I think for us, we have got some very definite ideas, particular for use in catalytic and enzymatic reactions. We know it will be more effective than existing technologies, so we have something that we believe people will be interested in developing with us. 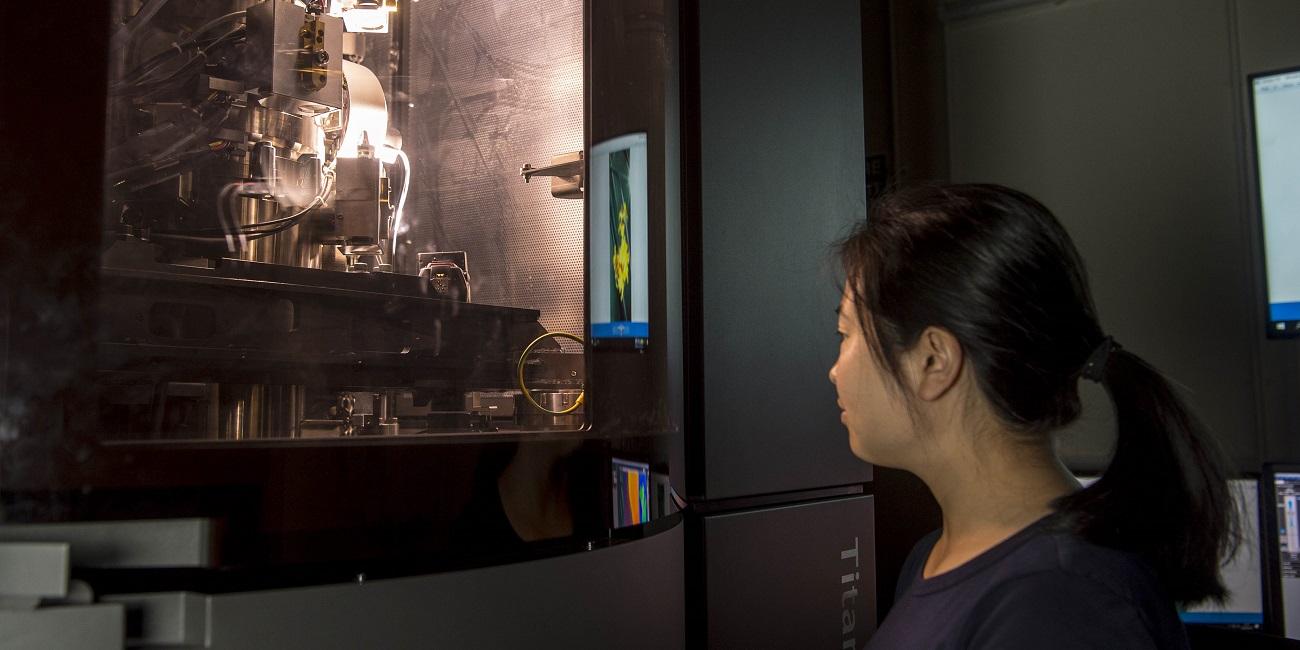 Dr Ye recalls a scene from the TV comedy show Blackadder II, where hapless Lord Percy believes he has created green gold – although he is told by Blackadder in no uncertain terms he has not created “gold” but a substance called “green”.

As the research at Leeds demonstrates, reality is often more surprising than fiction, as the work on gold nanoseaweed clearly demonstrates. Perhaps Lord Percy had created two-atom thick pure gold after all!

The research team is hoping to work with industrial collaborators on ways to scale-up the fabrication process. Any wanting more information should contact Professor Stephen Evans by email - S.D.Evans@leeds.ac.uk

Medicine is one area where technologies involving gold nanoparticles has huge potential and is a rapidly growing market.

Technologies are already being developed across diagnostic testing, medical treatments and procedures including: