A nocturnal creature with a supernatural reputation is the inspiration for a new children’s nature book published by the University.

The Mysterious Bird in the Moonlight tells the story of the nightjar, a bird whose soundless flight, large eyes and wide bill have given rise to folklore myths for centuries.

The book has been created by award-winning children’s author and illustrator Steve Smallman, who has written more than 50 children’s books including Dragon Stew, Hippobottymus and The Lamb Who Came For Dinner.

The new publication is the first children’s book to be published by the University and is one of several pieces of work produced as part of ‘Land Lines’, a study of modern British nature writing from the late 18th century to the present day.  The project uses artistic interventions to explore environmental themes, working with the public and commissioning new nature-themed works.

Land Lines, and its associated projects ‘Tracks, Traces and Trails’ and ‘Tipping Points’, is funded by the Arts and Humanities Research Council, part of UK Research and Innovation, and the book is being released as one of the outputs of the interdisciplinary Landscape Decisions Programme. 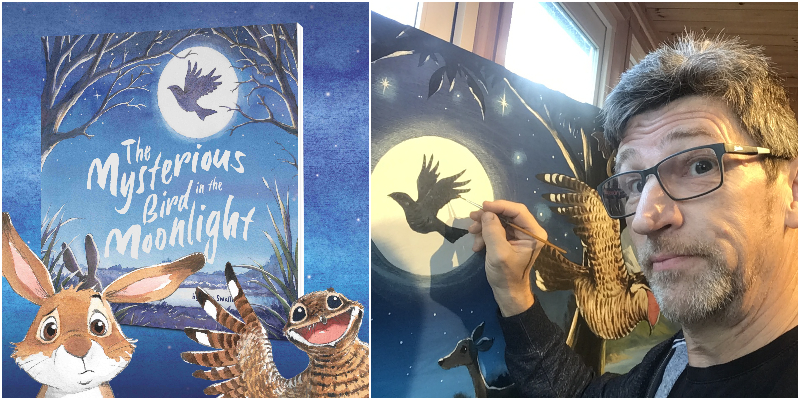 Principal investigator Professor Graham Huggan, from Leeds’ School of English, said: “Many of nature’s creatures remain mysterious to us, either because they are so small that they are invisible to us, or because they come out at night when most of us are fast asleep.

“This beautifully written and illustrated book on one such creature, the nocturnal nightjar, is sure to delight both children and their parents, inspiring them to uncover the multiple mysteries of the natural world.”

Researchers from the School of English, in partnership with Natural England and Hatfield Woodhouse Primary School, have taken inspiration for the project from Humberhead Peatlands near Goole, East Yorkshire, designated a Special Protection Area for its breeding nightjar population.

Numbers have fallen significantly due to loss of habitat, and the Royal Society for the Protection of Birds (RSPB) has given the bird amber conservation status.

Inactive by day, and well camouflaged by its mottled plumage, the nightjar visits UK habitats for only a few weeks in summer before moving on to warmer climates. The book will be available as nightjars return to the UK from Africa for the breeding season.

For centuries the bird was known as the goatsucker after the strange belief it stole milk from nanny goats, causing their milk to turn sour. Superstitious folk believed them to be unlucky, fearing they were a sign of death and disease.

Helen Acton, Principal of Hatfield Woodhouse Primary School, near Doncaster, said: “This book has enthralled and engaged our children. Our oldest children enjoyed the vocabulary and the stunning artwork, whilst our little ones fell in love with the animal characters.

“We intend to use the book as a starting point for teaching life-cycles and natural habitats in a local context but love the fact the ultimate message is one of friendship.”

The Mysterious Bird in the Moonlight is available to buy online and in bookshops from Thursday 27 May.

Further information about the Land Lines project is available via its website.