Setting fire to forest and agricultural land in Southeast Asia to prepare it for cultivation or grazing contributes to an estimated 59,000 premature deaths a year, say scientists.

Their analysis reveals that the greatest health impact from the burning, which releases tiny particles into the air which can get into people’s lungs, is felt by some of the poorest communities in the region, in northern Laos and western Myanmar.

Dr Carly Reddington, AIA Research Fellow in the School of Earth and Environment at Leeds, and the study’s lead author, said: “Our investigation quantifies the contribution of an often overlooked source of poor air quality and demonstrates that actions to reduce fire may offer considerable, yet largely unrecognised, options for rapid improvements in air quality.

“We found that across Southeast Asia, the amount of air pollution produced by these fires is comparable to that from industry, transport, and power generation.”

Across Southeast Asia – an area including Myanmar, Thailand, Cambodia, Laos, Vietnam and south east China – farmers burn forest as a way of clearing land for cultivation or to graze animals, often in the pre-monsoon period, usually in February to April.

During this period, the weather patterns over a large part of the region can result in a temperature-inversion, a meteorological phenomenon that prevents smoke and emissions from the fires dispersing, particularly at night or during the early mornings.

The fires generate a range of harmful pollutants, including fine particulate matter known as PM2.5 – tiny particles that measure 2.5 microns (where a micron is one millionth of a metre or less). According to the World Health Organisation (WHO), the particles are a risk factor in cardiovascular and respiratory diseases and cancer.

The researchers used measurements of air pollution along with computer models to measure the impact of the fires on air quality and the prevalence of disease.

In all the datasets analysed, the researchers found the greatest pollution emissions from the burning was coming from the northern region of Laos, Cambodia, Thailand, eastern and western Myanmar, and southern Bangladesh, and with lower levels of emissions in central Myanmar, Thailand, north Vietnam, and south eastern China.

The researchers modelled what improvements would be seen in air quality if the burning was stopped.

The concentration of PM2.5 – the fine particulates – would fall by between 40% and 70% in those areas experiencing the greatest emissions.

WHO has an interim annual target for maximum levels of PM2.5 which is 25 micrograms per cubic metre. 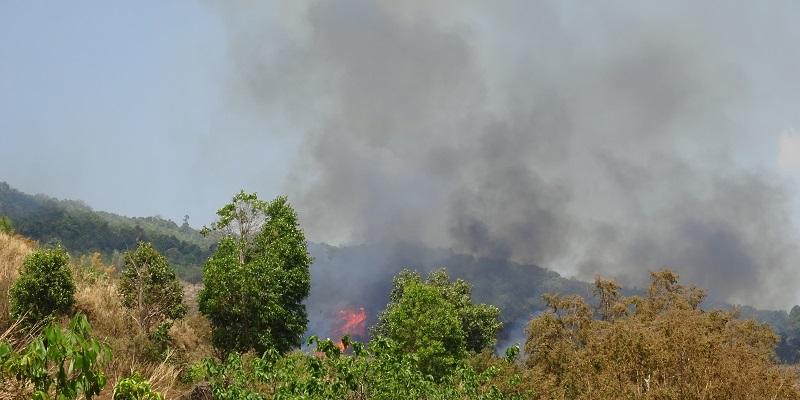 If the practice of burning could be stopped, the researchers argue that the number of people exposed to levels greater than the WHO interim target would drop by 64% in Thailand, 100% in Myanmar, in Laos by 92% and Cambodia by 44%.

Using epidemiological modelling, the scientists calculated the reduction in PM2.5 could reduce premature deaths caused by exposure to air pollution. In Southeast Asia deaths would fall by 12%, ranging from five percent in Vietnam to 28% in Laos and 3% in southeastern China. In total an estimated 59,000 premature deaths could be prevented each year.

They also mapped poverty data against PM2.5 concentrations and found that poorer, rural populations in Laos, Cambodia and Myanmar were exposed to higher levels of fine particle pollution.

Dr Reddington said: “This study is the first detailed assessment of the effects of forest and vegetation fires on air quality and human health in Southeast Asia.

“The study shows that air pollution from vegetation and forest fires seriously degrades air quality in Southeast Asia and that by preventing these fires, exposure to harmful air pollutants could be substantially reduced and many premature deaths could be avoided.

“Furthermore, it shows that the poorer populations of Southeast Asia are being disproportionally exposed to the air pollution from these fires.”

New efforts are now needed to reduce forest fires in the region. 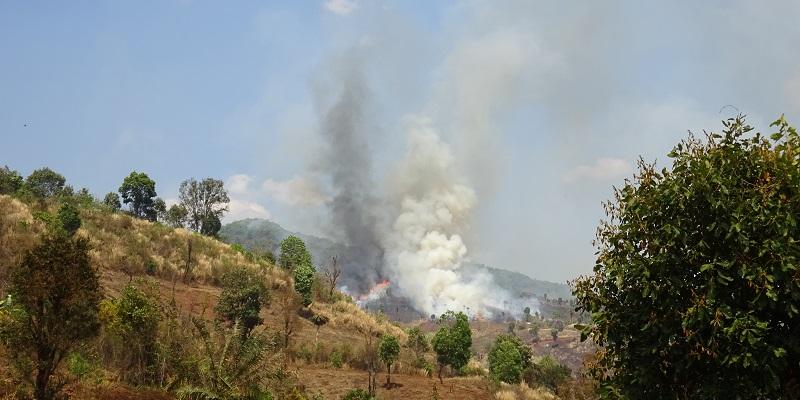 Smoke from the burning of agricultural land and forests. Image: Dr Carly Reddington

Dr Reddington added: "A complete ban on the use of fire may not be practical for many local farmers who don’t have any alternative. Pollution emissions are dominated by burning of forests, so there needs to be increased effort to reduce fires associated with deforestation.

“These local and regional benefits may provide a powerful incentive to reduce deforestation. Increased support for community-protected forests and other protected areas, where forest clearance fires are less prevalent, are an important way to reduce fires."

The paper, Air pollution from forest and vegetation fires in Southeast Asia disproportionately impacts the poor, is published in GeoHealth.

For media information, please contact David Lewis in the press office at the University of Leeds via d.lewis@leeds.ac.uk