A glacier in West Antarctica has been formally named after the city of Glasgow to mark its hosting of the COP26 climate change conference.

The Scottish city will welcome more than 100 world leaders to COP26, the 26th UN Climate Change Conference of Parties, from this weekend until Friday 12 November. The conference marks a key moment in human history for our response to climate change, especially given the impact of the COVID-19 pandemic.

The Glasgow Glacier is one of nine areas of fast flowing ice in the Getz basin to be named after locations of major climate treaties, conferences and reports, following a request by University of Leeds scientists.

PhD Researcher Heather Selley, from Leeds’ School of Earth and Environment, and an Enrichment Student at The Alan Turing Institute, identified 14 glaciers in the Getz basin of West Antarctica that are thinning and flowing more quickly into the ocean.

Her study, published in February 2021, revealed that 315 gigatonnes of ice has been lost from the Getz region over the last 25-years, adding 0.9 mm to global mean sea level – the equivalent of 126 million Olympic swimming pools of water.

To mark 42 years of collaboration on international science and climate policy decision-making, Heather requested that the nine unnamed glaciers in her study be named after the locations of major climate treaties, conferences and reports. Five of the glaciers were previously named for US explorers, researchers and officials working in the region.

The proposal was submitted by the Foreign, Commonwealth & Development Office on behalf of the UK Government and supported by the UK Antarctic Place-names Committee. The names will now be added to the international Composite Gazetteer for Antarctica, for use on maps, charts and future publications.

By naming this glittering giant of nature after the city where next week humankind will gather to fight for the future of the planet, we have a stark reminder of what we are working to preserve.

The move was welcomed by Prime Minster Boris Johnson, who said: “By naming this glittering giant of nature after the city where next week humankind will gather to fight for the future of the planet, we have a stark reminder of what we are working to preserve. Glasgow represents our best chance. Just as the G20 shares a collective responsibility to act, so the solutions are in our hands.”

Heather said: “Our study was the first to show that glaciers in this remote region of Antarctica were speeding up. The glaciers are named in chronological order, with Geneva Glacier marking the first ever climate summit in 1979 on the west of the Getz study region and Glasgow Glacier marking the upcoming COP26 on the east.

“Naming the glaciers after these locations is a great way to celebrate this international collaboration on climate change science and policy over the last 42 years. We wanted to permanently mark the outstanding effort the scientific community has put into measuring the present-day impact of climate change, and its predicted future evolution.”

Amanda Milling, Foreign Commonwealth and Development Officer for Polar Regions, said: “Naming these fast-flowing glaciers sends a clear message that time is running out for action on climate change. It also recognises the importance of global collaboration as we look towards Glasgow and COP26.

“Scientists estimate that over the past 25 years the Getz region has added the equivalent of 126 million Olympic swimming pools of water to world oceans, due to climate change. The time is now for urgent action.”

Dramatic changes in ice cover and images of the Antarctica have become synonymous with the climate crisis. Over the last 40 years, satellites have observed huge iceberg calving events, change in the flow of glaciers and regions of rapidly thinning ice, all of which improves our understanding of how the ice sheet contribution to sea level rise has changed and provides essential evidence of the impact of climate change.

The 500km-long Getz ice shelf was discovered during the 1940s by the United States Antarctic Service (USAS) and the US Navy. It was first mapped by the United States Geological Survey from US Navy air pictures taken between 1962–65, and named by the USAS after George F Getz of Chicago, who helped furnish the seaplane for the expedition. 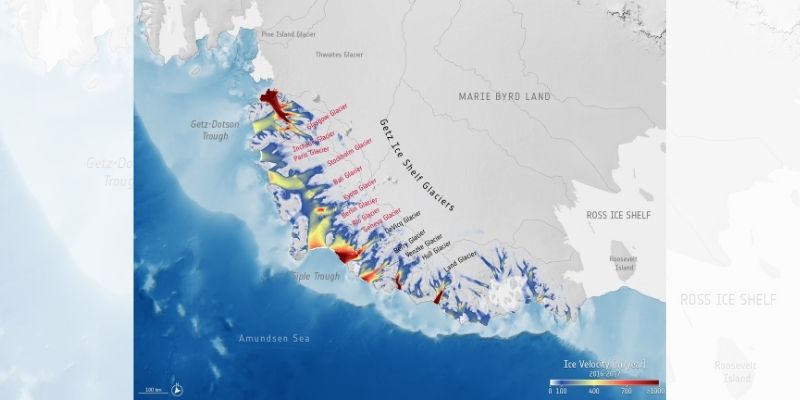 Dr Anna Hogg, Associate Professor in Leeds’ School of Earth and Environment, said: “The climate crisis affects all of us, whether through flooding of our homes, increased storm frequency, reduced crop harvests, or the loss of habitats and biodiversity in the natural environment, with some communities impacted much more than others. Whilst these new glacier names celebrate the knowledge gained through scientific collaboration and the action taken through policy, it is clear now that much more must be done.

“I am inspired by the school climate strikes, which remind all of us that we are only temporary gatekeepers, and have a responsibility to protect planet Earth for the next generation. There is no doubt that there’s a need for urgent action, we have great hope in the power of international collaboration which can enable significant progress to be made at COP26 this year.

“The recent IPCC AR6 report finds that unless there are immediate, rapid and large-scale reductions in greenhouse gas emissions, it will not be possible to limit warming close to 1.5°C or even 2°C.”

Heather will be presenting this work in her side event ‘West Antarctica: Getz on the run’ at the COP26 Climate Conference on Wednesday 10 November at 10am GMT. It is a Blue Zone event in the International Cryosphere Climate Initiative (ICCI) Cryosphere Pavilion which will be live streamed on Facebook, Twitch, Cryosphere Pavilion Youtube and ICCI Youtube.

The Geneva Glacier flows at the western end of the Getz Ice Shelf and was named after the world’s first climate conference in 1979.

The Rio Glacier lies further east and commemorates the first Earth Summit in 1992 where the United Nations Framework Convention on Climate Change (UNFCCC) was opened for signatures along with its sisters the Rio convention, the UN convention on biological diversity and the UN convention to combat desertification.

The Berlin Glacier flows further east and is named after the first Conference of Parties (COP) in 1995 which assessed the progress of dealing with climate change. It marked the uniting of the world to tackle climate change and the agreement on a mandate for future negotiations.

The Bali Glacier marks the release of the Intergovernmental Panel on Climate Change forth assessment report (AR4) in 2007. Around this time climate science entered into the popular consciousness. At the thirteenth Conference of Parties (COP13) parties agreed on the Bali road map, which charted the way towards post-2012 outcome with a working group on long-term cooperative action under the convention.

The Stockholm Glacier honours the Intergovernmental Panel on Climate Change fifth assessment report (AR5) approval session in 2014. This report represents the biggest ever coming together of scientists at the time.

The Paris Glacier memorialises the agreement of a legally binding treaty in 2015 which aimed to limit global warming to well below 2°C, preferably below 1.5°C, compared to pre-industrial levels. It was adopted by 196 parties that together represented at least 55 % of the global greenhouse gas emissions.

The Incheon Glacier marks the meeting of the IPCC to consider the special report of global warming of 1.5°C in 2015. This marked the first time the three different IPCC working groups worked together to produce a report in an interdisciplinary manner.

Finally, the Glasgow Glacier flows at the very east end of the Getz basin and is named after Glasgow which will host the 26th UN Climate Change Conference of Parties (COP26) later this year. It marks a key moment in human history for our response to climate change especially given the impact of the COVID-19 pandemic.

For more information about how University of Leeds climate researchers are working to tackle the environmental crisis and help the world achieve net zero carbon emissions – and how they are preparing to address world leaders at COP26, read this Leeds at COP26 story and Spotlight article.

The Alan Turing Institute is the national institute for data science and artificial intelligence.