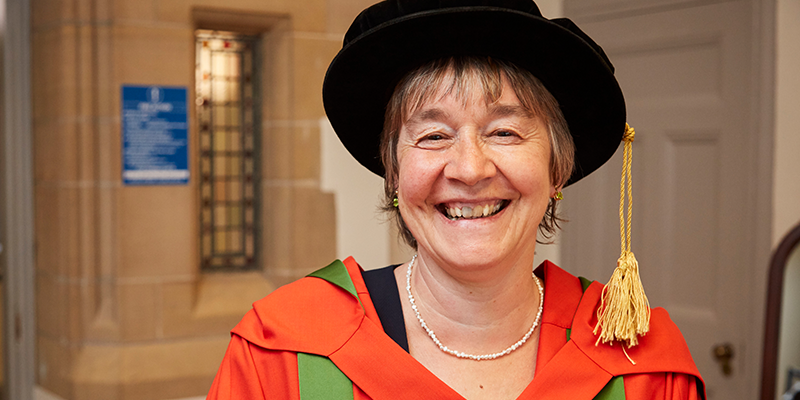 Great achievements are invariably based on some combination of natural talents and hard work.  This is certainly true of Professor Gabriele (Gabi) Hegerl, whose outstanding and hard-won achievements across climate science have inspired a new generation of researchers and at the same time demystified the art of success.

Gabi was born in Munich, where she also spent her student days, and graduated with a PhD in mathematics from the city’s Ludwig Maximilian University.  She moved to the USA in the late 1990s, where she held research positions at Texas A&M and Duke Universities, before moving to Scotland in 2009 to take up a chair at the University of Edinburgh.

Gabi’s research has focused on understanding the causes of climate change over the last thousand years.  She pioneered statistical methods of analysing the climate, and then used those methods to determine the amount of global warming caused by human activity, as distinct from the effects of changes in the Sun’s output or volcanic activity.  In essence, her work proved – with 99% certainty – that fossil fuel emissions account for all of the warming trend experienced over the last 100 years.  Gabi’s ongoing research uses these techniques to help make accurate predictions of future temperature and extreme rainfall changes.

Not long after Gabi moved from the USA her partner, Tom, died of cancer, leaving Gabi with two young sons to support.  She has always been impressively honest about falling short of perfection in both her family and work life:  her willingness to share her experiences with younger researchers, and women scientists in particular, has been of tremendous value to the next generation.

One of Gabi’s greatest achievements has been to build interdisciplinary bridges across the international research community.  In 2013, she was a key author of the Inter-Governmental Panel on Climate Change Synthesis Report.  Through her hard work and determination Gabi bought physical scientists, social scientists and economists together and got them talking in a common language to provide the scientific underpinning for the 2015 Paris agreement on climate change.

This and her many other achievements were recognised in 2017, when Gabi was elected as a Fellow of the Royal Society.

Chancellor, it is a pleasure to welcome her to Leeds, where she has been an inspiration to many. I am personally honoured to present to you for the degree of Doctor of Science, honoris causa: Gabriele Clarissa Hegerl.
Back to the top