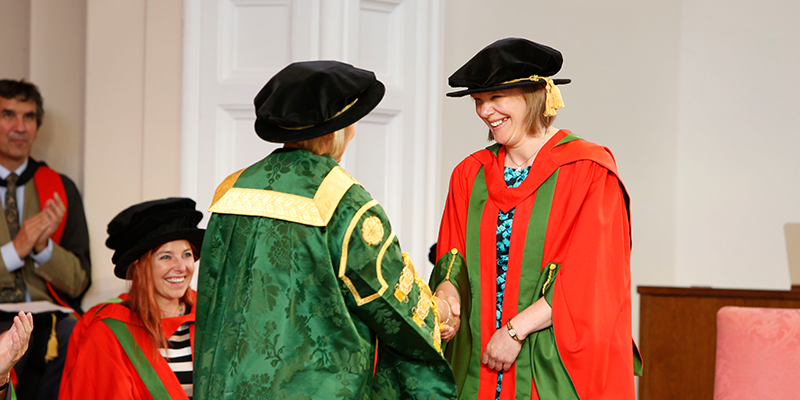 Today we honour a pre-eminent individual in the field of polar science and policy, whose work has helped to preserve Antarctica as a ‘natural reserve, devoted to peace and science’ and to ensure a central role for the UK in polar affairs.

Jane Rumble began her civil service career in the Department of Environment, where she undertook a range of environmental and corporate policy roles. Having a degree in Geography, she was able to merge her interests in the environment and in social policy in 2003, when she joined the Foreign and Commonwealth Office to work on polar policy. She was appointed as the Head of the Polar Regions Department in 2007.

In this role, Jane leads the UK’s policy and science delegations to the annual meetings of the Antarctic Treaty Consultative Parties and the Commission for the Conservation of Antarctic Marine Living Resources. These are multi-week meetings involving over 50 countries – inherently complex, politically sensitive and commercially significant.

Jane is an outstanding diplomat, displaying a focused commitment to getting the best possible result; a complete command of the subject matter and of the rules; flexibility and ability in forming partnerships; and a persuasive but intensely humane approach to difficult negotiations.

Recently, Jane was instrumental in ensuring that the UK achieved its aim of seeing the creation of a new Marine Protected Area in the Ross Sea, an area of 1.55 million square kilometres. The result of this intensely difficult six-year international negotiation will see a new level of protection for one of the least known and most fragile ecosystems on the planet. She has also contributed significantly to the development of Arctic policy.

Jane’s work has been recognised by her election to the Fellowship of the Royal Geographical Society; she is a Policy Fellow with the Centre for Science and Policy at Cambridge; and most recently she was appointed as an officer of the Order of the British Empire in the 2018 Queen’s Birthday Honours List.

Jane’s dedication to the protection of the Polar regions shows in the passion, determination and wisdom she brings to her Twitter feed, where she illustrates the impact of melting ice caps, profound ice loss, and the stark beauty of the region.

Chancellor, it is therefore my great pleasure to present to you for the degree of Doctor of Science, honoris causa:  Jane Frances Rumble.