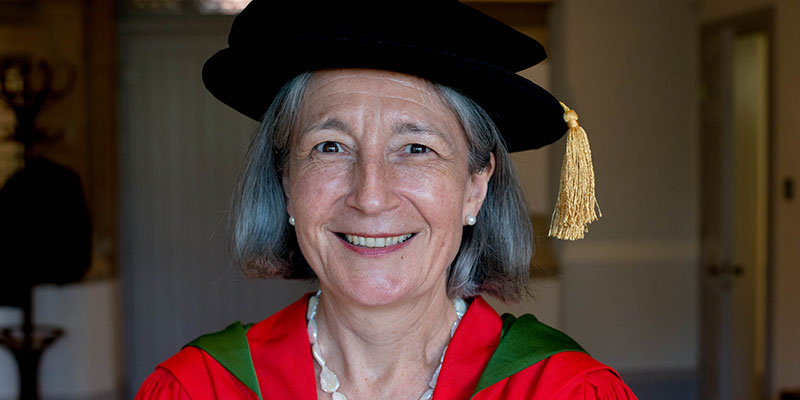 The 70th anniversary of the National Health Service is an auspicious time to honour the achievements of a leading surgeon and champion of gender equality and excellence in medicine.

A practising orthopaedic surgeon at Ipswich Hospital for 25 years, Professor Dame Clare Marx has helped to improve the lives of countless patients. She is an influential advocate for the ‘Hello my name’ is campaign, which seeks to improve patient-doctor communication, and for safe and compassionate care within the NHS.

Clare made history in July 2014 when she became the first female President of the Royal College of Surgeons of England since its formation in 1800. She led Project Transform, an ambitious programme to modernise the Royal College’s London headquarters into a state-of-the-art surgical facility.

Clare sought to reposition the Royal College as a progressive force in education, surgical standards and professional leadership: historic photographs of the great and good in the President’s Office were replaced with images of living female role models in surgery. The message was clear: today’s female surgeons are every bit as important, a call amplified on social media by #ILookLikeaSurgeon. She also sought to identify and breakdown the barriers which resulted in fewer women entering the surgical professions through engagement with schools, medical undergraduates and women in surgery.

Clare’s lifelong interest in medicine began after damaging her finger as a five-year-old. During a visit to the local hospital, she was fascinated by what she saw and the ability of doctors to “fix things”; a very orthopaedic trait. She qualified from UCL and undertook surgical training London and Boston, before moving to Ipswich in 1993 and specialising in lower limb joint replacement.

Leeds is not the first to recognise her outstanding contributions in UK surgery. Clare was awarded a CBE for services to medicine in 2007, and became President of the British Orthopaedic Association in 2008. She is currently Chair of the Faculty of Medical Leadership and Management and is leading a GMC review into medical manslaughter.

While an influential advocate for women in surgery, Clare has refused to be defined by her gender. Following her appointment as President of the Royal College she said: “I have always thought of myself as a doctor and a surgeon. I just happen to be female.”

Chancellor, I am delighted to present for the degree of Doctor of Medicine, honoris causa, Clare Lucy Marx.
Back to the top