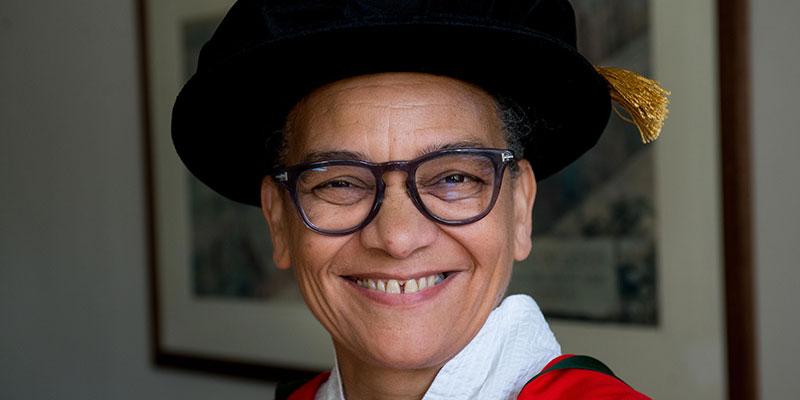 Lubaina Himid is now hailed as one of the most important and internationally admired artists of our day. Winner of the Turner Prize in 2017, she was fêted in 2018 as the star of Art Basel, and featured in the critical success of the Berlin Biennial. Her first solo show in the USA has just opened at the prestigious New Museum in New York.

Such critical recognition has, however, been long in coming, to the enduring shame of an indifferent, racist and sexist art world that could not acknowledge her or her many Black colleagues. In conversation in 2013 with Tate Modern Director, Frances Morris, Lubaina Himid spoke poignantly of her hopes of recognition ‘being crashed against the rocks of a closed artworld’ that would not see in colour and could not acknowledge the creativity of Black British artists.

Lubaina Himid first visited this university in 1984 at the invitation of a solitary Black Fine Art student, Sutapa Biswas.  Our white and still almost completely masculine, if incipiently feminist, curriculum had left her stranded. Not only did Lubaina Himid accept the invitation, she also selected Sutapa Biswas’s work for the exhibition she curated in 1985 at the ICA, The Thin Black Line. Lubaina Himid has always worked indefatigably as a curator to create opportunities for, and lend support to, Black women artists still struggling today to become more visible and less isolated, and to make Black histories visible.

One of the most brilliant and original of contemporary British artists, Lubaina Himid takes her place as a colourist beside Bridget Riley, and is a painter of intense pathos and a biting political critique not seen in Britain since Hogarth.  She draws on East and West African aesthetic traditions, rediscovering and modernizing their secret language of pattern while reframing the Western traditions of figuration and composition.

Her own defiance is expressed in her brilliant range of artworks on paper, canvas, wood, china and in installation. She not only celebrates historic and contemporary Black resilience and resistance, she also captures intensely the trauma and pathos of the men and women whom Western societies abuse – be that enslaved Africans, queer Black men and women, and other outcasts. Proudly carrying her double heritage from the people of Zanzibar and the North of England, Lubaina Himid is a history painter speaking from and to shared but differentiated legacies of the trauma of colonial modernity and a still troubling present.

We are honoured to know that Leeds artists and art historians have shared a little in her struggle and now celebrate her international recognition as an artist, a teacher, a curator and a model of dedication and courage for us all today.  Vice-Chancellor, it is my special privilege to present to you for the degree of Doctor of Letters, honoris causa, Lubaina Himid.
Back to the top