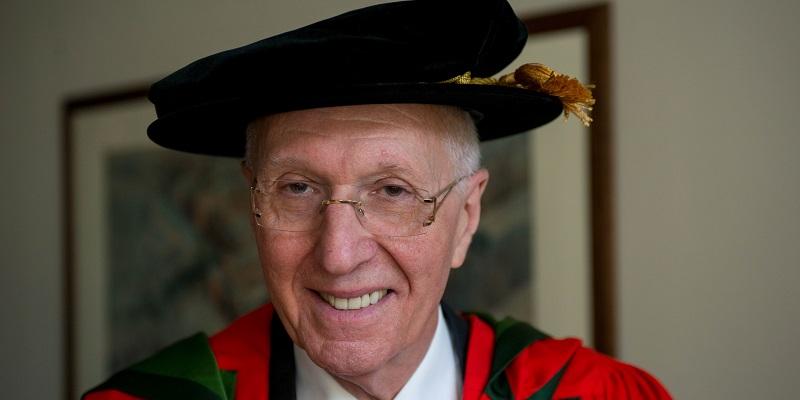 Vice-Chancellor:
Sir Michael Pepper’s long and distinguished career has straddled the disciplines of science and engineering, combining pioneering and original studies that have not only revealed the fundamental physics that governs how semiconductor materials conduct electricity, but also the translation of this understanding into technologies of societal benefit.
Michael read physics at the University of Reading, and continued there to secure his PhD. Whilst working at the Plessey Research Laboratories and subsequently at the GEC Hirst Research Centre in the 1970s, he carried out a series of important experimental studies on how electrons, the sub-atomic particles that lie at the heart of electrical conduction, travel through disordered semiconductors. As a result, he was able to propose new concepts of electrical conduction, and develop and distinguish competing theories of the movement of electrons through semiconductor materials. This work also underpinned the discovery and understanding of the quantum Hall effect in which Michael was instrumental, and was the subject of the 1985 Nobel Prize for Physics.

Many scientists require sophisticated infrastructure, such as particle accelerators, to probe the fundamental physics of elementary sub-atomic particles. However, using semiconductor transistors, not too dissimilar to those found in transistor radios or pocket calculators, and by now working at the Cavendish Laboratory at Cambridge, Michael developed technology to isolate and manipulate individual electrons on the nanometre length scale. This enabled their singular physics to be accessed and exploited, and led to many remarkable discoveries, such as the conductance quantization of ballistic one-dimensional electrons. This work transformed condensed matter physics, and created the entirely new field of mesoscopic physics.

In 1991, Toshiba Corporation set up, in Cambridge, their first research laboratory outside Japan, with Michael as Managing Director. He introduced visionary research and development programmes exploiting his quantum devices, which has led to technology for secure quantum cryptography communication systems, for example, which is now being commercialised. In 2001, he co-founded the company TeraView to exploit the terahertz frequency region of the electromagnetic spectrum. Clinical trials are now taking place to establish the role of TeraView technology in medical imaging, and in particular for the detection of cancerous tissue.

For over thirty years, Michael has nurtured diverse teams of PhD students, post-doctoral researchers, technical and academic colleagues at Cambridge and UCL, and in his companies. Many of these have gone on to establish their own successful research groups across the UK and internationally, including here in Leeds.

Vice-Chancellor, I am delighted to present to you for the degree of Doctor of Science (Engineering), honoris causa, Michael Pepper.