New research has identified a way of using nanoclusters to bolster waning antibiotics.

Tiny particles of gold could be the new weapon in the fight against bacterial antibiotic resistance, according to research just published.

Scientists have been investigating the use of gold nanoclusters - each made up of about 25 atoms of gold - to target and disrupt bacterial cells, making them more susceptible to standard antibiotic treatments.

A report from the World Health Organisation last year said “antibiotic resistance is rising to dangerously high levels in all parts of the world” and called for greater investment in ways to tackle the problem.

For several years, researchers have recognised the antimicrobial properties of specially-adapted gold nanoparticles, but they have struggled to find a way of getting the nanoparticles to the site of a bacterial infection without harming healthy host mammalian cells.

Now a study by an international team of scientists from the University of Leeds, Southern University of Science and Technology (Shenzhen) and Fudan University (Shanghai), both in China, has identified a way of packaging the gold nanoclusters in a molecular envelope that makes them less toxic to healthy tissue without affecting their antibacterial properties.

Laboratory studies have shown that the approach has had a “strong effect” in terms of killing a range of bacteria, some linked to hospital acquired infections and resistant to standard antibiotic treatments.

The findings, which are based on laboratory investigations and not patient trials, have been published in the journal Chemical Science.

Bacterial cell walls are more strongly negatively charged than the cells of mammals. Using the idea that opposite charges attract, the gold nanoclusters are wrapped in a molecule called a ligand that is positively charged. Like a carrier pigeon, it finds and delivers the nanoclusters to the wall of bacteria cells, where they disrupt the bacterial cell membrane.

The disruption to the cell membrane increases the permeability of the bacterial cell to standard antibiotic treatments, giving a new lease of life to antibiotics that are either ineffective or have waning effectiveness against resistant bacteria.

The problem, though, is the positively charged molecule wrapped around each nanocluster is also toxic to healthy host mammalian cells.

To protect host cells, the scientists have added a second ligand to the envelope around each nanocluster. These molecules have both positive and negative charges and are called zwitterionic groups, which are also found in the lipids of cell membranes in mammals. This makes the gold nanoclusters more compatible with host mammalian cells, and easier for the gold nanoclusters to pass through the kidney and be excreted from the body. 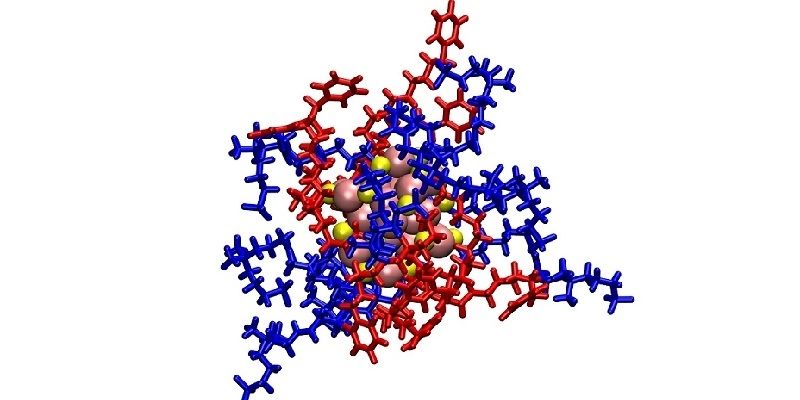 The gold nanocluster in the molecular envelope. The ligands in blue are the zwitterionic ones while those in red are positively charged ones. They are bound to the Au25 cluster (in brown) via thiol molecules (yellow). Credit: University of Leeds

In laboratory tests, the scientists investigated whether the gold nanoclusters would be effective in reducing the defences of the bacterial cells - and make them more susceptible to antibiotic treatment.

They used a bacterial strain called methicillin resistant Staphylococcus epidermidis (MRSE), which is responsible for some hospital acquired infections.

In those cases where the antibiotic was used in combination with the gold nanoclusters, there was an improved antimicrobial effect. With one class of antibiotics, there was a 128-fold decrease in the amount of antibiotic needed to inhibit growth of MRSE.

Professor Dejian Zhou from Leeds’ School of Chemistry and one of the supervisors of the research, said: “Despite extensive research in antibacterial nanomaterials, most of the research has only focused on boosting antibacterial potency without considering their biocompatibility, stability and ability to be excreted from the body. These are essential requirements for clinical approval. As a result, many of the promising antibacterial nanomaterials will not progress to become therapeutic agents to be used in medicine.

“By systematically tuning the ratio of the two ligands, we have identified a way of using gold nanoclusters not only to act as effective antimicrobial agents, but as a mechanism to enhance the potency of antibiotics which have become ineffective because of bacterial drug resistance.

“The research has a significance on the way we should be thinking about responding to antimicrobial resistance.”

Professor Zhou hopes that the research findings will be picked up by the pharmaceutical industry. He believes combing gold nanoclusters with existing antibiotics will be a faster and cheaper alternative to developing a host of new antibiotics in response to bacterial antibiotic resistance.

The paper, “Controlling the pyridinium–zwitterionic ligand ratio on atomically precise gold nanoclusters allowing for eradicating Gram-positive drug resistant bacteria and retaining biocompatibility”, was published in Chemical Science on 24 October 2021, and is available to download.