A rich collection of rare manuscripts and books forms a special public display of treasures at the University of Leeds' new £1.9m gallery.

The Treasures of the Brotherton Gallery, situated beneath the iconic Parkinson tower, will take visitors on a journey through the University’s renowned Special Collections.

Artefacts include a 4,500-year-old Babylonian clay tablet, a copy of William Shakespeare’s 1623 First Folio, a draft manuscript in the hand of a 14-year-old Felix Mendelssohn and a map and compass used by Bertie Ratcliffe, the first prisoner to escape back to Britain from Germany during the First World War.

Vice-Chancellor Sir Alan Langlands said: “It gives us great pleasure to open up these wonderful treasures to new audiences. We hope that residents of the City of Leeds and far beyond will join us on campus to explore centuries of history represented across an amazing range of objects.

“We greatly appreciate the strong support of the Heritage Lottery Fund and the generosity of the Brotherton-Ratcliffe family in making this possible.”

The new gallery is bringing dozens of these historic items to the front doorstep of the University for the public to enjoy and appreciate, having previously been housed deep within the Brotherton Library. 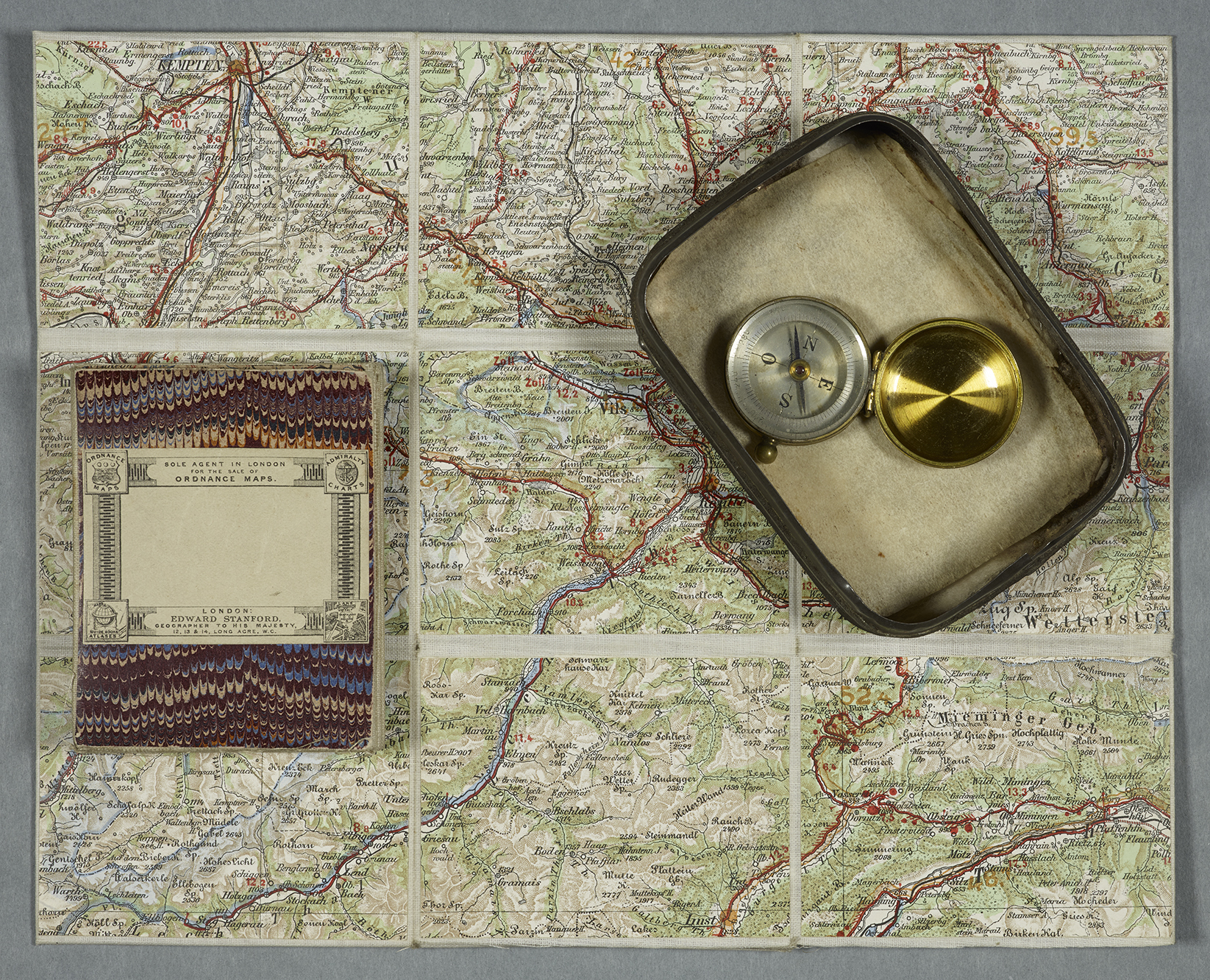 The gallery has been made possible thanks to National Lottery players – a grant of almost £1.4m from the Heritage Lottery Fund and a generous private donation from the Brotherton-Ratcliffe family have supported the University in showcasing the treasures.

Dr Stella Butler, University Librarian and Keeper of the Brotherton Collection, said: “If your interests are in travel, our Special Collections have some amazing maps. If cooking is your passion, we have Tudor cookery books, while for book lovers, we have examples of the very first books ever printed in England alongside exquisite contemporary bindings.

“There really is something for everyone in this exciting new gallery and we’re very proud to share these treasures with our visitors. We believe that, whatever their background and interests, they will find something to enjoy in this stunning setting.”

The new gallery, which mirrors The Stanley & Audrey Burton Gallery at the opposite end of the Parkinson Building, also includes a temporary exhibition space that will enable the University to uncover the rich stories locked up in its collections, helping bring to life important anniversaries and events.

The first such exhibition will mark the centenary of the introduction of conscription in Britain, exploring what happened when able-bodied men refused to fight for their country.

Leeds University Library is one of the finest in the world and the only one in the UK to have five collections awarded Designated Status – recognised as having outstanding national and international importance – by Arts Council England.

The collections began with Leeds industrialist Lord Brotherton, who funded the building of the Brotherton Library 80 years ago and bequeathed his library of rare books and manuscripts to the University. From this, successive librarians have been able to build a collections of artefacts, manuscripts and rare books of enormous cultural significance over many decades. 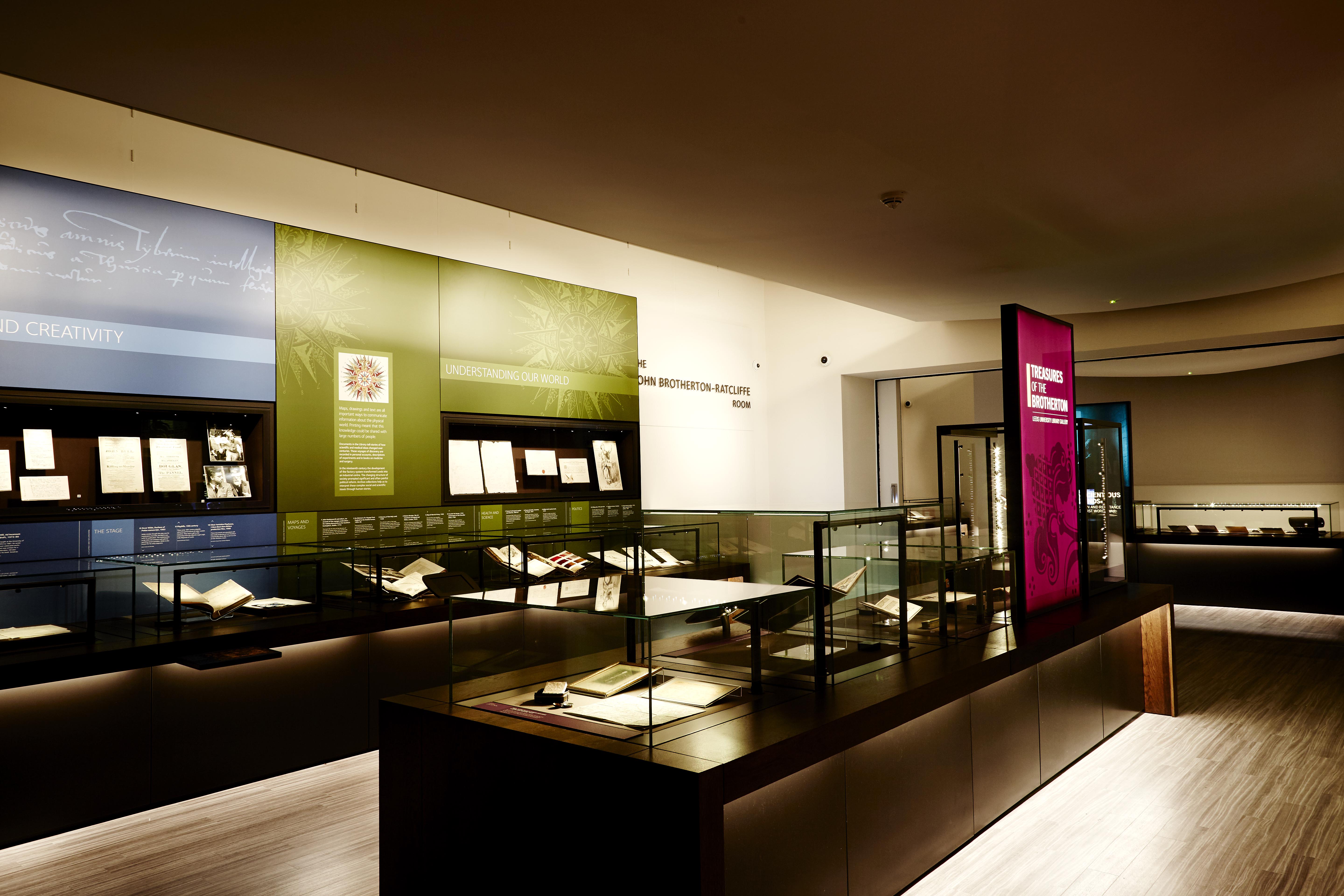 Dr Butler added: “We’ve had the difficult pleasure of selecting 100 or so items from more than 200,000 rare books and hundreds of thousands of manuscripts and objects. Our delightful challenge will continue because even the ‘permanent’ display will be changing regularly, to make sure we conserve these precious objects, giving us the opportunity to show the depth and breadth of the collections.”

Fiona Spiers, Head of Heritage Lottery Fund Yorkshire and the Humber, said: “This is an extraordinary collection and one with great significance nationally and internationally. We are delighted to be able to fund this fantastic new gallery, which will allow people to explore the incredible range of artefacts for the first time.”

Treasures of the Brotherton Gallery is open 10am-5pm Tuesday-Saturday and 1-5pm on Mondays. Admission is free. It is closed on Sundays and University holidays (see library.leeds.ac.uk/treasures for full details). Parkinson Building, Woodhouse Lane, University of Leeds, LS2 9JT. Telephone 0113 343 9803 or email gallery@leeds.ac.uk.

The Stanley & Audrey Burton Gallery, a few steps from the new Treasures gallery and also housed in the Parkinson Building, showcases some of the University's exceptional collection of European and British painting, drawings and prints, dating from the 17th century to the present day, as well as small collections of sculpture, ceramics, miniatures and photographs. library.leeds.ac.uk/art-gallery

A varied programme of public events will complement the treasures on display and bring the archives alive, from “show-and-tell” sessions to bookbinding demonstrations. Full details can be found at library.leeds.ac.uk/treasures, or pick up a What’s On leaflet.

The new gallery also includes a temporary exhibition space that will showcase additional treasures from Special Collections, usually to coincide with important anniversaries and events.

The first such exhibition marks the centenary of the introduction of conscription in Britain, exploring what happened when able-bodied men refused to fight for their country. On Conscientious Grounds: Objection and Resistance in the First World War, organised by members of the University’s Legacies of War centenary project, features original letters and personal items belonging to some of the men who asked to be excused from military service.

Some highlights from the new gallery:

This first collected edition of the plays of Shakespeare is widely considered one of the greatest books ever published. It was printed in 1623, seven years after Shakespeare's death. The edition was compiled by John Heminge and Henry Condell – theatre colleagues of Shakespeare. The term "folio" refers to the book's impressive physical size.

Heminge and Condell claimed to base their collected edition on "true originall copies". Only half of Shakespeare's plays had appeared in print during his lifetime. The First Folio collected reliable versions of these 18 previously printed works and added the texts of another 18. The additions include plays such as Macbeth, Twelfth Night and The Tempest. These important works might not be known today had it not been for this book.

There are 228 surviving copies, probably just under a third of those originally printed, and 44 folios remain in the UK. This is a relatively high survival rate for a book of the time; most of those fortunate enough to own this book prized and cared for it.

Bunin was the first Russian writer to receive the Nobel Prize for Literature and was the last in the line of great Russian writers that included Dostoevsky, Tolstoy and Chekhov.

No stranger to prestigious literary prizes, he was awarded the Pushkin Prize by the Imperial Russian Academy of Sciences in both 1903 and 1909, the year he was himself elected to the Academy.

Bunin fled from Bolshevik Russia in 1920 to exile in France, from where he won the Nobel Prize for Literature in 1933. His prize was widely seen not only as an endorsement of Bunin's artistic talent and the culture and values of exiled Russians, but also as mud in the eye of his presumed rival for the prize, Maxim Gorky, and his pro-Soviet backers.

Bunin received his beautifully intricate and colourful certificate and medal from King Gustav V of Sweden in Stockholm on 10 December 1933.

Maps, sardine tin and a compass associated with Bertram Ratcliffe, 1917

Bertram Ratcliffe was a nephew of the University's great benefactor, Lord Brotherton. He was serving as a captain in the 1st Battalion, West Yorkshire Regiment when the First World War began. He was one of the first British soldiers to be wounded in action, at the Battle of the Marne in September 1914. He was captured by the Germans and imprisoned at Ingolstadt in Bavaria.

To help him escape, a friend in London attempted to send him a map of Bavaria soldered into a sardine tin. The workman asked to do the soldering was suspicious and informed the police, so the map was never sent. However, Bertram's mother succeeded in sending a compass in a tin of Harrogate toffee. He used this when a chance to escape arose in 1917 and he became the first British prisoner of war to make his way back to England. He received a hero's welcome, including lunch with George V and the award of a Military Cross.

This illuminated manuscript chronicle is nearly 18 metres long and is made from 39 large pieces of parchment pasted together. It is written in Anglo-Norman French and decorated with 64 painted roundels. It was produced in Paris during the reign of Louis XI (1461-1485).

Across the head of the roll stretch a row of miniatures depicting the six days of the Creation. The content begins with the Old Testament, the life of Christ, Greek and Roman history, and Western European history.

There will be many exciting volunteering opportunities at the new gallery, covering all aspects of its work, from conservation to digital projects and public engagement. Further details of these opportunities will appear on the treasures website.

The University of Leeds is a creative community with a rich cultural life, offering many opportunities for visitors to get involved or immerse themselves in the arts. Other museums and galleries on campus include the Marks in Time exhibition at the M&S Company Archive; ULITA – an Archive of International Textiles and the Museum of the History of Science, Technology and Medicine.