As a refugee growing up in India, Dr Madan Luthra (PhD Biochemistry, 1972) learnt that education would prove his lifeline.

Dr Madan Luthra was born in the village of Jodhpur, Pakistan, five days after India was partitioned. Madan’s mother carried him and his sister across the border into India, clinging to the divide between two train carriages for over 18 hours to reach a refugee camp.

“If you look at where I’ve come from, where I ended up, who would imagine that’s possible?” Madan muses.

The answer, in short, is nobody.

Growing up as a refugee, hard work became a constant in the life of a man whose scientific research, along with his approach to life, would impact countless others along the way. 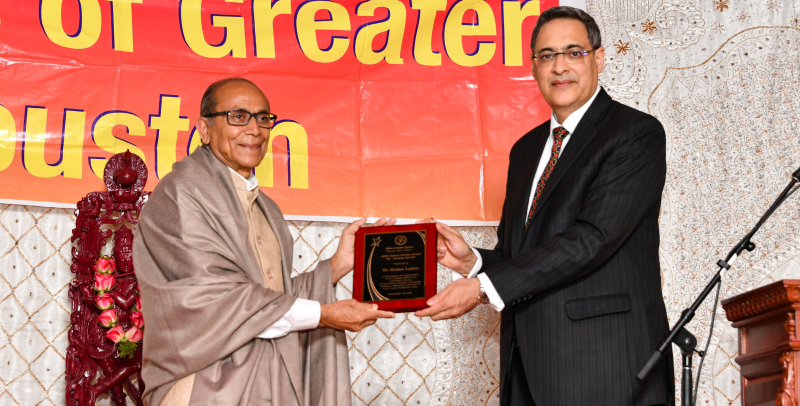 Madan speaks to me from his home in Houston, Texas. He is retired now, a long career in biochemistry behind him, but he still has a busy day ahead. He volunteers for Sewa International – a charity dedicated to supporting local communities – and their phones haven’t stopped ringing throughout the COVID-19 pandemic. “We’ve just had an unprecedented cold spell, too,” Madan says. “Food supplies went down, power, water pipes burst, so there were a lot of people needed our help.”

I ask him how he coped – he is 73 years old, after all. “It wasn’t a problem for me. It really reminded me of Leeds, actually. It’s always cold there, no?” He laughs – assuring me that despite the weather, his time in the Department of Biochemistry was special, and Leeds has always held a warm place in his heart.

My father taught us that without education, nothing was going to change.

In Madan’s eyes, his story begins once the refugee camps were left behind – he was too young to remember them. His family were reunited and settled in Alawalpur, a small town near Jalandhar.

They did not have much – Madan mentions that he had no shoes, one shirt, a pair of shorts – but despite that, he smiles at the memories. “Things were simple. It was a two-room mud house, with eleven of us in there. Oh, and the cow and calf, too. But even though we were very poor, we had a lot of fun.”

It was during this time that Madan learnt a lesson that would shape the rest of his life. “My father was a primary school teacher, and he had a vision for us. He taught us every evening, and he helped us to understand that education was the most important thing in the world. I’m so grateful to him for that.”

Such was the impression Ram Dhan Luthra made upon his children, all Madan’s siblings went on to university. Of the five of them, three became teachers.

Madan went through the public school system in Jalandhar, and then veterinary college in Hissar, where a glimpse of biosystems caught his imagination.

“After two years, I switched to biochemistry at Panjab University. But the problem was, advances were limited because there was a lack of funding. There were no materials so we could only read theory.”

“I wanted to learn more, and I wanted to go somewhere that could happen.”

“I didn’t apply anywhere but Leeds for my PhD because so many of my books were written by a Dr Peter Campbell. I wanted to study with him.”

Appointed Head of Department in 1967, Professor Campbell was indeed a distinguished scientist. More than that, he was a supporter of young biochemists in developing countries, and he worked tirelessly to help them gain PhD funding. Madan was the first student he took from India.

“Getting that letter was one of the happiest days of my life,” Madan remembers. “I was in my village during the holidays, and I can still picture it in my hand, seeing his signature. This was all I had worked for; I could go somewhere, I could do something.”

Although money was still an issue, support from his brother – who now worked as a postman in Slough – and a scholarship from the Multiple Sclerosis Society helped Madan on his way.

He would go on to spend much of his time in the biochemistry department, situated at 9 Hyde Terrace – a red-brick terrace building that is no longer recognisable to Madan as he looks on google maps. “It’s unbelievable,” he says. “We were crammed in with the labs and the offices back then. But now, I saw there was a penthouse for sale. I thought, ‘Oh wow! Things have changed.’”

It was in those very labs that Madan had his first scientific success. He worked for a year on the role of phosphoinositide (a pivotal class of phospholipids) in the brain – with nothing to show for it. “I worked so hard – because that’s all I wanted to do,” Madan explains. “But I couldn’t solve it.”

Professor Campbell and Madan decided to change the project, only Madan struggled to let it go. “I was so frustrated, so I went to the library instead of going home. I found an article from 1858 on inositol, and it described a very simple method. I picked it up, went back to the lab and tried it for the whole night. By the next evening, I could break the compound. My supervisor, Ayman Sheltawy, came back on the Monday. I showed him the compound, and his eyes lit up.”

It was the breakthrough they’d been looking for, and Madan’s findings were published in three papers and a distinguished journal. 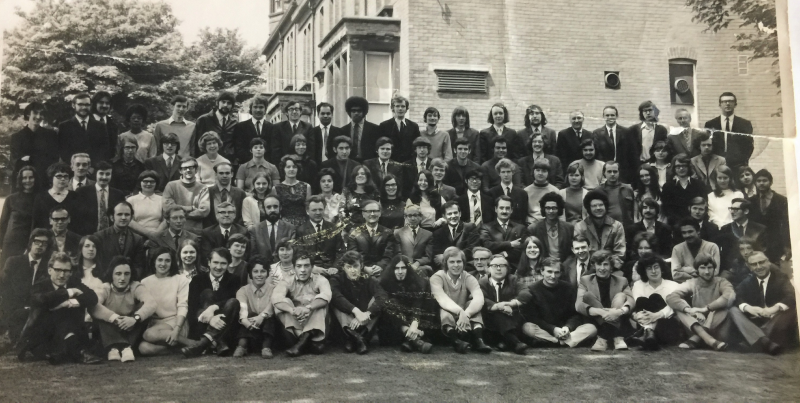 Image: Madan (second row, second from right) and the Department of Biochemistry, 1970-71

Where long hours and science were nothing new to Madan, he was undergoing a different education outside of the lab.

A few months after he arrived in Leeds, Madan and a fellow Indian student bought a run-down property on Grosvenor Hill for £250. Madan recalls the challenge of making it habitable: “The toilet was outside, which was terrible in winter, so the first thing we did was build a toilet inside – not that we knew what we were doing. There was no heating, so we got paraffin heaters.”

“On a weekend, we’d walk to go to buy things from auctions. I remember carrying big paraffin drums up Grosvenor hill – it’s a big hill! It was great fun, though.”

“At Christmas, I needed money, so I joined my brother in Slough and worked for the post office, delivering parcels on our bicycles. We came from poverty, so we knew what hard work was, but nothing prepared us for the British winter at 3am on a morning – it was so cold.”

“My Leeds experience was not just academic. I met so many people from all over the world who helped me during those days. It was beyond anything I expected – yes, it helped me in my career – but it also prepared me to do something on a larger scale with people, too.”

“I realised that it doesn’t matter whether you’re British, Indian, an immigrant, local, refugee, black, white, whatever: human need is human need. We help one another.”

It is why, on leaving Leeds, Madan gave his renovated house to an Indian student new to the city – for free. Madan points out that it is an approach to life, along with his commitment to learning, that began with his parents.

He dedicated his thesis to his father, who sadly passed away in December 1968, shortly after his son arrived in Leeds.

Groundbreaking research in the USA

Madan moved to the University of Arizona Medical Centre, Tucson for his post-doctorate, where he would have the chance to conduct research on red blood cell membranes.

It was after months of adjustments and calculation that Madan and his team discovered calmodulin, a pivotal protein present in all living cells. The discovery, the crowning moment in Madan’s academic career, would play a key role in research later considered for a Nobel Prize – and was worthy of consideration in its own right. “It was a universal protein to all species, and everyone was talking about it. That was an exciting time.”

Just as important for Madan, however, was meeting his wife, Rajyalakshmi, a fellow academic at the University. The couple settled in Houston, where Madan worked in a faculty position at the Baylor College of Medicine. He would later open a drug testing laboratory, running his own business until 2003, before seeing out his career at the University of Texas M. D. Anderson Cancer Center (UTMDACC) working in clinical pathology research until his retirement.

Rajyalakshmi continues to work at UTMDACC as a professor and director in the Molecular Diagnostic Laboratory.

Madan wasn’t ready to relax in retirement. He began volunteering with Sewa International with the world view developed in Leeds at the forefront of his mind. Sewa is a Sanskrit word that describes the act of selfless service.

“Every community has the same problems – loneliness, helplessness, for example – every community needs support.” And when COVID-19 hit, Madan witnessed the need increase. “We delivered groceries, PPE, aided stranded international students, supported grieving families, even helped arrange funerals. And then there was the plasma register.”

It was an area that would marry Madan’s lifelong passions – science, and helping others – as he helped to create a donor registry, finding blood donors from amongst recovered patient, whose antibodies might help fight the virus.

People began to take notice, with local and national press soon picking up the story. He was awarded the 2020 Akhil Chopra Unsung Heroes award for his efforts during COVID-19.

As ever, he remains humble. “Things were moving too slowly, and so I helped speed things up with finding donors. Now there is a vaccine, so we are helping people get vaccinated, too.” 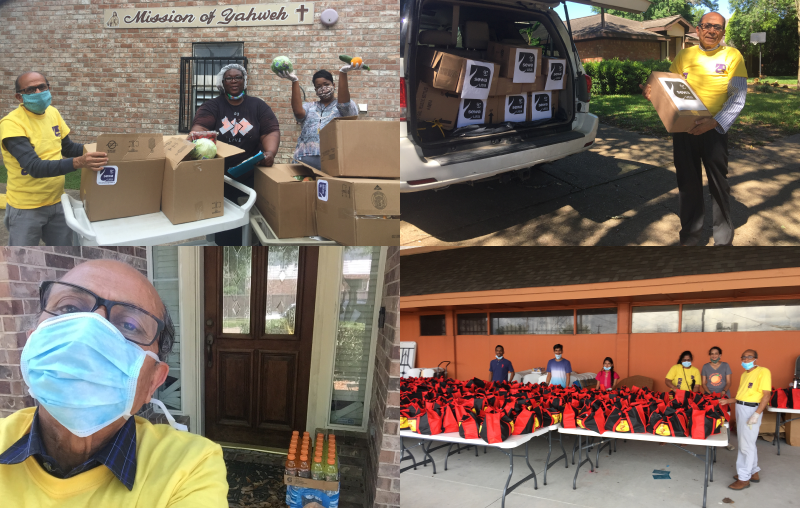 I ask Madan, just as I did at the start of our interview, how he coped visiting these COVID-19 positive patients. Was he not worried? “I take all necessary precautions. Their need is far greater than the risk to me.”

“If people need help, and I can help them, Ed, why wouldn’t I? Nar sewa naryan sewa – it means serving humanity, serving divinity.”

And for Madan, after a lifetime of learning, that is the most important lesson of all.