The six finalists’ films were premiered and the winner announced lin the newly-refurbished Riley Smith Hall at Leeds University Union.

In first place was Virtual Holocaust Memory, produced by Hermione Oldham and Mia Frank, pictured below, who took home a £1,000 prize. Their film was inspired by the technologies that allow us to engage with and preserve Holocaust memory. 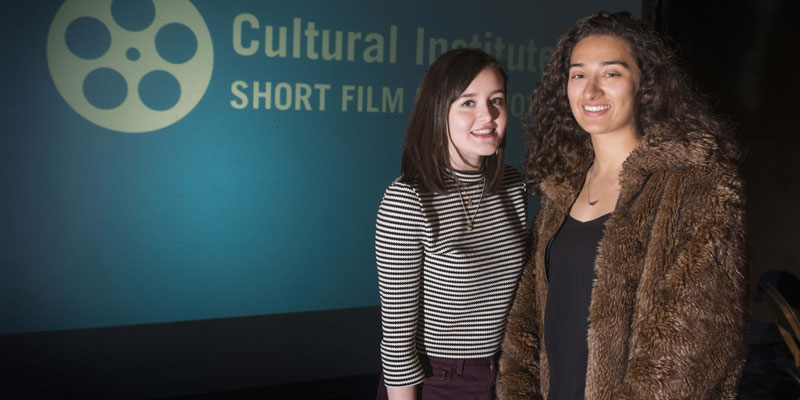 Second was Digital Renaissance Editions, by Jack Routledge, Dominique Scholes and Callum Isaac. Their film, which looked at a project to publish open-access digital editions of plays by Shakespeare's contemporaries, won them a prize of £500.

Finally, Oscar Baldry and Joe O’Shea won £300 for their third-placed film De La Tierra, looking at how marginalised voices of indigenous people in Chile are represented in digital media.

The audience also heard from the filmmakers themselves and discovered more about the research projects that inspired their work.

Later, a panel discussion with the guest judges, Leeds Digital Festival director Stuart Clarke and Lisa-Dionne Morris, a designer and senior teaching fellow in the School of Mechanical Engineering, was chaired by Professor Paul Cooke, Centenary Chair in World Cinemas at the University.

Professor Frank Finlay, Cultural Institute Director, said: “Digital creativity is an important area of focus for the University’s research on culture, just as it is a burgeoning feature of the thriving creative economy.

“The Cultural Institute is keen to nurture such creativity among our students, and this new prize is an excellent way of doing precisely that.”

“Digital creativity is an important area of focus for the University’s research on culture.”

Karen Emanuel graduated with a genetics BSc in 1986. She was an Entertainment Secretary booking bands for Leeds University Union before forging a career in record production with Rough Trade.

In 1990 she set up Key Production, which is now a hugely successful group of creative companies, specialising in the design and manufacture of bespoke packaging and products for all industries including the music industry – this includes vinyl pressing, CD and DVD manufacture.

Karen said: “I was very honoured to be asked to judge this inaugural competition. Whilst my day job is all about physical rather than digital product, we are a creative bunch and the films all touch my life in one way or another.

“My experience at Leeds made me into the person I am today and whilst I didn’t end up as a geneticist, working in events was the first step towards my long and successful career.”

A film buff since childhood, Col Needham graduated from the University with a degree in computer science in 1988 before developing his personal movie database into IMDb.

The event was part of Leeds Digital Festival, a multi-venue, city-wide festival celebrating digital culture in all its forms, which takes place from this Saturday, 22-29 April.

The Cultural Institute, launched in 2016, builds on the University of Leeds’ rich cultural heritage and tradition of partnership working across the city and beyond. Its aim is to stimulate and support creative collaborations with cultural partners and pioneer research across disciplines, to create opportunities for students to develop their skills, and to widen local­, national and international engagement in the cultural wealth of the University and the Leeds City Region.