Their fields of expertise are apparently worlds apart – one is an internationally-respected choreographer, the other a professor of political communication.

But in an unusual move, Sharon Watson, Artistic Director of Phoenix Dance Theatre, and Professor Stephen Coleman from the University of Leeds, have collaborated to create a unique piece of dance called Take A Position that responds to voters’ emotional reactions to Brexit.

Working with talented students from the Northern School of Contemporary Dance (NSCD) in Leeds, they have drawn on interviews conducted with ‘leave’ and ‘remain’ voters by Professor Coleman to create a piece that explores public opinion surrounding the divisive political situation.

Excerpts from some of the interviews are woven into a soundscape created by Christella Litras, who collaborated with Ms Watson on Phoenix Dance’s Windrush triumph, which is currently on tour.

“I’m interested in how politics is experienced and felt by people, often in ways that cannot be simply put into words. ”

Professor Coleman, from the University’s School of Media and Communication, said: “I’m interested in how politics is experienced and felt by people, often in ways that cannot be simply put into words.

“When people are driven by passions, as they certainly are on both sides of the Brexit debate, it makes sense to explore exactly what it is that moves them. Choreographers and dancers are experts at interpreting how and why people move.

“That is why this collaboration with Sharon Watson has been so immensely rewarding. It's a way of exploring a different dimension of political communication – one that can help us to understand raw feelings that are too easily neglected in our political discourse.”

Sharon Watson, pictured below, is a dancer-turned-choreographer who has been Artistic Director at Phoenix since 2009. She has helped shape the cultural fabric of Leeds, City of Dance over the last 20 years.

She said: “I do hope people find a way of connecting with it because it’s a story that resonates and will be with us for a very long time.” 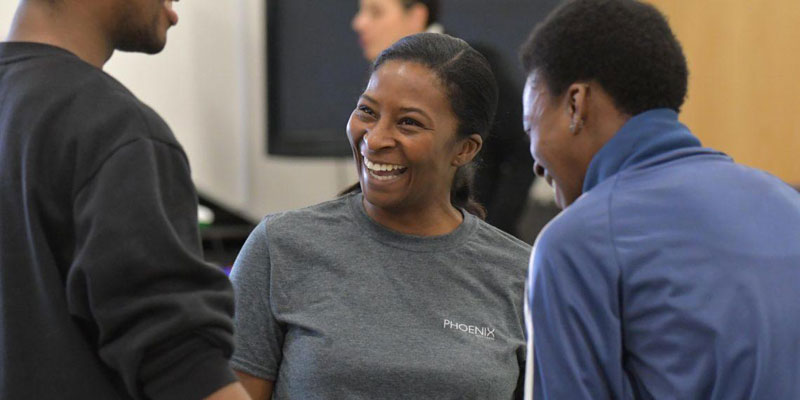 The work is premiered as part of the NSCD’s Student Showcase performances this week, which includes a range of exciting new commissions by guest artists and staff, as well as original student work.

The project was sparked by the University’s Cultural Institute, which connects researchers with partners in the creative sector to develop pioneering collaborations.

A previous collaboration led to the production of a play, Counted, based on Professor Coleman’s interviews with voters around the 2010 general election, performed at Leeds’ West Yorkshire Playhouse.

For further information and interviews, contact Gareth Dant, Media Relations Manager in the University of Leeds press office, on 0113 343 3996 or g.j.dant@leeds.ac.uk.

Northern School of Contemporary Dance, based in Leeds, is a world-leading centre for contemporary dance and part of the national Conservatoire for Dance and Drama (awarded Gold in the Government’s latest Teaching Excellence Framework). For over 30 years it has been enabling aspiring dance artists to enter and shape the industry. Professional training and education are offered at Access, Undergraduate and Postgraduate levels, focussing on the development of versatile and enterprising dance artists, with highly-tuned technical, creative and performance skills. NSCD regularly commissions professional dance artists to create new work for its students. www.nscd.ac.uk

Phoenix Dance Theatre was established in Chapeltown, Leeds, in 1981 and is now the UK’s longest standing contemporary dance company outside London and has international acclaim. Sharon Watson became the 7th Artistic Director in 2009. Yorkshire Woman of the Year 2017, she is in the Top 50 Power List of the Northern Power Women Awards. For more information visit www.phoenixdancetheatre.co.uk