Eric Lu, 20, from the US, has been awarded first place at the Leeds International Piano Competition, widely regarded as among the most coveted prizes in the musical world.

Globally-renowned pianist, educator and philanthropist Lang Lang presented the prizes following the last concerto final at Leeds Town Hall on Saturday, having himself received an honorary degree from the University as part of the evening’s proceedings.

The event was a glittering finale to the triennial piano competition which – with the University as its principal partner – has seen every aspect of the instrument celebrated by a wider audience than ever before. 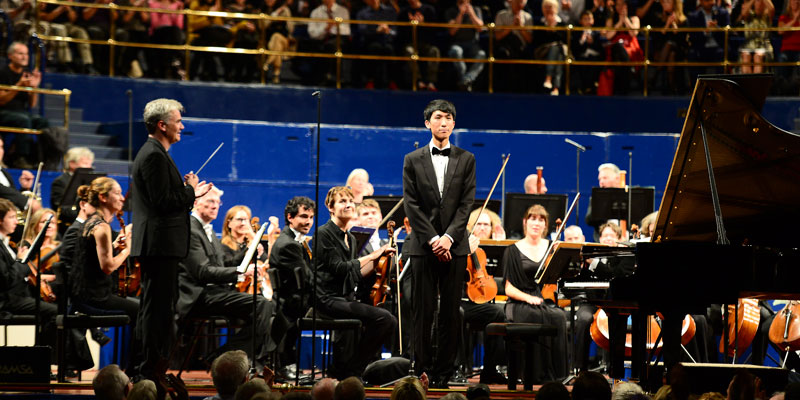 Starting with international first rounds shared across Berlin, Singapore and New York in April, 68 entrants were whittled down to 24 finalists from 16 countries and territories who made their way to Leeds last week, for the second round and semi-finals held in the University’s Great Hall.

Every performance by the young competitors has been watched by audiences across the globe thanks to free online streaming by classical music specialists medici.tv.

The honorary degree of Doctor of Music was conferred on Lang Lang, who is the piano competition’s Global Ambassador, after the last of five finalists performed with the Hallé orchestra, conducted by Edward Gardner.

The full ceremony, and the prize presentations, can be viewed via medici.tv here. All rounds of The Leeds remain available to watch for three years, and BBC Radio 3’s extensive coverage of the semi-finals and finals is available via BBC i Player Radio. The finals will be broadcast at 7pm on BBC FOUR television on Sunday 23 September.

Each year the University honours a number of distinguished individuals from varied walks of life who have contributed knowledge, understanding and expertise in the service of society.

The citation for Lang Lang’s award was delivered by Professor Frank Finlay, Executive Dean of the Faculty of Arts, Humanities and Cultures and Director of the University’s Cultural Institute.

Citing the Chinese-born musician’s contributions to global culture and education, he said: “Unprecedented for a classical musician, Lang Lang won global recognition performing to a TV audience of billions at the opening ceremony of the 2008 Beijing Olympic Games. 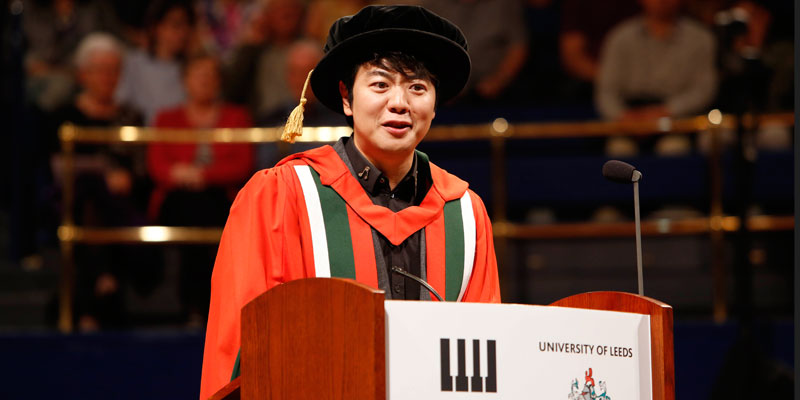 “He is a role model for young musicians everywhere, a United Nations Messenger of Peace, focusing on global education, and he was picked as one of the 250 Young Global Leaders by the World Economic Forum.”

Lang Lang told the audience: “It's a great honour to receive this incredible honorary doctorate from the University of Leeds – which is one of the best universities in the world."

He also paid tribute to The Leeds' founder, Dame Fanny Waterman – who later joined the stage for the prize presentations – and to the finalists.

"The Finals of The Leeds will stay in my memory for a long time. It has been a privilege to witness so much extraordinary talent on stage.

“It's a great honour to receive this incredible honorary doctorate from the University of Leeds, which is one of the best universities in the world.”

"I'm extremely proud of my association with the city of Leeds, with the piano competition – which is doing so much to unite excellence and accessibility – and with the University. It truly is the city of the piano and I look forward to returning."

Vice-Chancellor Sir Alan Langlands, who is also trustee of the piano competition, thanked everyone who had made the 2018 competition such a great success, and thanked the audience for giving the University's new Doctor of Music such a warm welcome.

In addition to the £25,000 cash prize and the Dame Fanny Waterman Gold Medal, Eric Lu receives a ground-breaking prize portfolio designed with long-term career development in mind – including worldwide management with Askonas Holt, a CD contract with Warner Classics and performance and recording opportunities with BBC Radio 3. The prize also includes a host of performance engagements with high profile promoters, including some of the world’s premiere venues and orchestras. 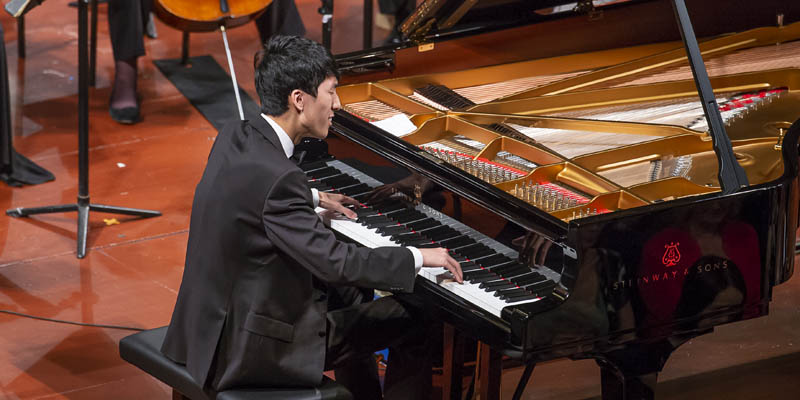 Their first engagement is this Thursday, when they open Royal Liverpool Philharmonic Orchestra’s new season under the baton of Vasily Petrenko.

Xinyuan Wang, 23, from China, was third and received £10,000. The medici.tv Audience Award also went to Wang, who will have a concert broadcast on the classical music streaming channel.

The full list of concert engagements for the prize winners is available here.

Paul Lewis said: "All the pianists have shown extraordinary talent, passion and dedication throughout the competition, and it goes without saying that the standard of playing has been remarkable.

"Many of the world's greatest pianists have started at The Leeds and I'm certain all the 2018 finalists have bright futures, and we look forward to supporting what we believe will be successful and fulfilling careers."

Lang Lang was born in Shenyang, north-east China, and started playing the piano aged three. He gave his first public recital before he was five. Aged nine, he won first prize at the International Tchaikovsky Competition for Young Musicians. He subsequently left China for Philadelphia’s Curtis Institute.

His big break came when, at just 17, he stood in for André Watts at the last minute in front of 17,000 people at the Ravinia festival near Chicago. He became an overnight sensation.

Lang Lang has collaborated with conductors including Sir Simon Rattle and Daniel Barenboim and performs with the world’s top orchestras. He has played sold-out concerts in the major concert halls of every continent in the world. In 2008, he played at the opening ceremony for the Beijing Olympics.

For the past decade Lang Lang has contributed to musical education and support for children worldwide. In 2008 he founded the Lang Lang International Music Foundation in New York City, which now has programmes in North America, Europe and Asia.

In 2013 Lang Lang was designated by the Secretary General of the United Nations as a Messenger of Peace, focusing on global education, and was picked as one of the 250 Young Global Leaders by the World Economic Forum.

One of the world’s foremost music competitions, The Leeds attracts the world’s finest pianists under 30, and this year’s 24 competitors are no exception.

The Leeds has hugely expanded its programme for 2018, going beyond a single competition to become a city-wide celebration of the piano, with the ongoing help of the University and other supporters.

For the first time, there was a number of events taking place alongside the competition heats hosted on the University campus and held in conjunction with the School of Music. These Piano + events included talks, masterclasses for music students and the public by members of the jury, and performances. 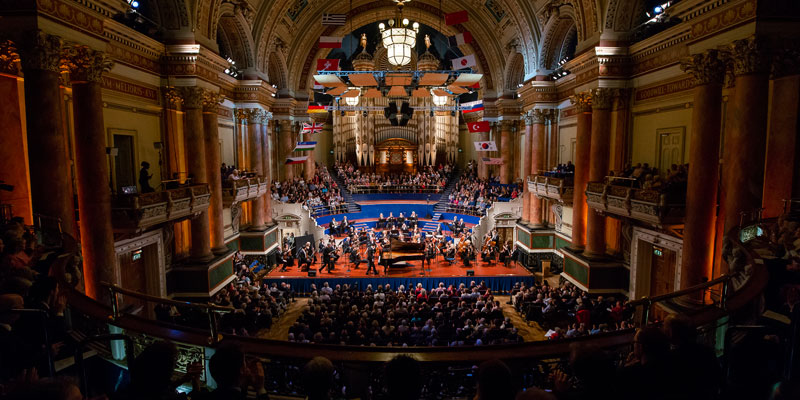 A dozen imaginatively decorated pianos formed a Piano Trail across the city and have been played and enjoyed for a month, while performances in a converted shipping container in the city centre – the World’s Smallest Concert Hall – have entertained music-loving members of the public.

And, after an absence of almost 30 years, the Leeds Pub Piano Competition was resurrected this year. Coming second among eight finalists on Thursday at The Tetley was Dr Des McLernon, Reader in the University’s School of Electronic and Electrical Engineering.

medici.tv’s extensive coverage, supported by the University of Leeds, which began in August and ran throughout the Competition, reached audiences in more than 3,700 cities in 140 countries. It was particularly popular in the UK, USA, China, Japan and Germany. Millions more enjoyed the Finals on BBC Radio 3, which broadcast live from the town hall and also covered all the Semi-Finals.

More details about the competition and its relationship with the University of Leeds can be found here.

All rounds of The Leeds remain available to watch via medici.tv for three years, and BBC Radio 3’s extensive coverage of the semi-finals and finals is available via BBC i Player Radio. The finals will be broadcast at 7pm on BBC FOUR television on Sunday 23 September.

The next competition will take place in 2021.