But it was an Anglo-Armenian family that provided the inspiration for the Walkers, and now a fellow Anglo-Armenian artist has embarked on a mission to firmly re-establish the connection, using correspondence found in a University of Leeds archive.

Taqui, Susan, Mavis (known to her family as Titty), Roger and Brigit Altounyan lived in Aleppo in Syria. They met Ransome during a summer holiday of sailing, fishing and camping in the Lake District in 1928. Their experiences of learning to sail on Coniston Water inspired the author to write a book for children. 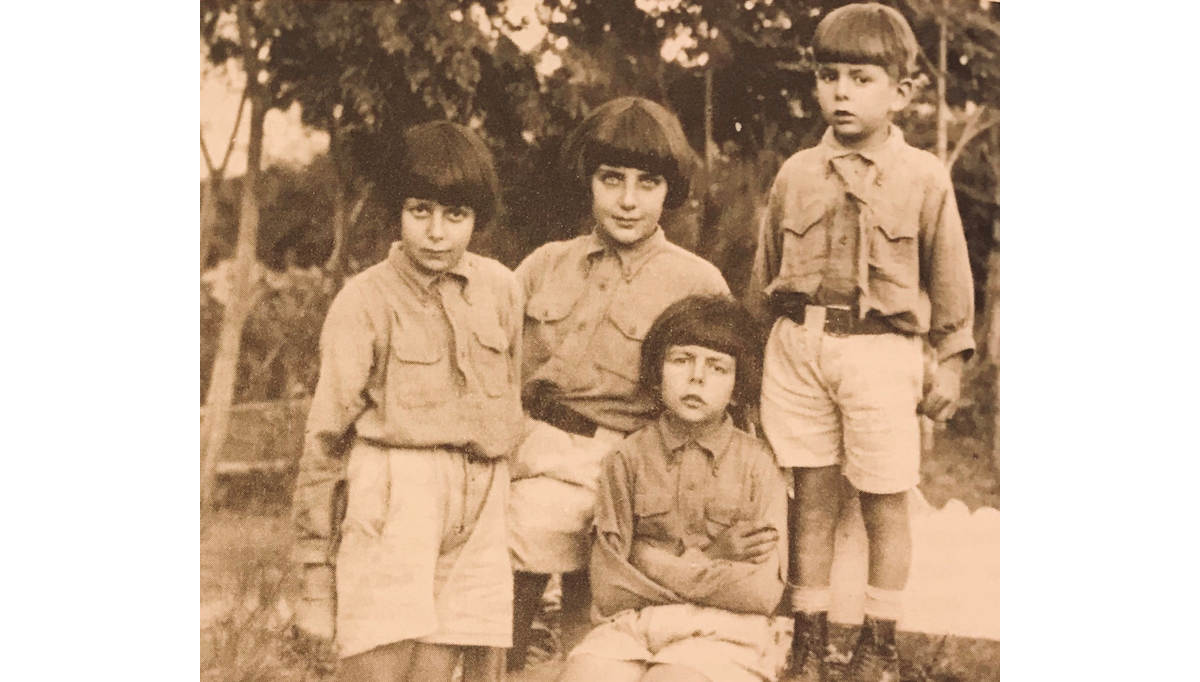 Ernest helped run his family’s renowned hospital in Aleppo, but the children knew the Lake District well, spending summer holidays at the home of their maternal grandfather William G Collingwood, a notable artist.

Leeds-born Ransome was himself a close family friend of the Collingwoods and had visited them in the Lakes from childhood. He learned to sail in their boat – also called Swallow.

Two years after that idyllic summer of 1928, the first edition of Swallows and Amazons was published. It bore the dedication: "To the six for whom it was written in exchange for a pair of slippers", referring to a pair of Turkish slippers the Altounyans had given Ransome as a parting gift.

But Ransome went on to distance his characters and the Altounyan children, excising that dedication and emphasising the inspiration of his own childhood visits to Nibthwaite in the Lake District. 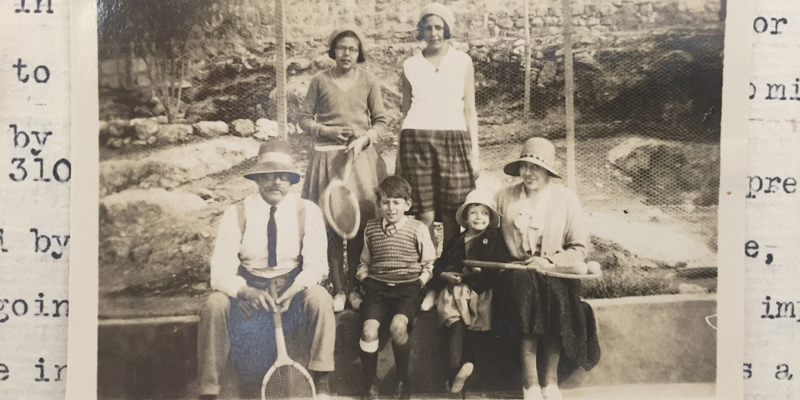 Now Cumbrian-based artist Karen Babayan, who herself left Iran as a teenager after the Islamic Revolution 40 years ago, wants to redress the balance.

“Swallows and Amazons is the first of a series of masterpieces of childrens’ literature,” she said. “But what is not widely enough known is the part that Altounyan family played as the catalyst for the books, which are such an integral part of Lake District mythology.

“I want the contribution of the Altounyan family to be more widely acknowledged and celebrated, bringing positive awareness of different cultures in the area,” she said.

“In knowing the identity and ethnicity of the children, I believe young British readers of all cultural backgrounds would feel more connected to and excited by the works of Arthur Ransome and the timeless landscape of the Lake District.”

“I want the contribution of the Altounyan family to be more widely acknowledged and celebrated, bringing positive awareness of different cultures in the Lake District.”

The book – Swallows and Armenians – explores the Altounyans’ lives in Coniston and Aleppo, bringing to life their cultural history, traditions and their relationship with the Ransomes.

Interviews with family members, curators and authors further inform the book, which reasserts the Middle Eastern cultural context, with links to the current war in Syria and the migrant crisis.

A selection of family portraits by Dora Altounyan will also go on public show for the first time – including an iconic portrait of Titty as a child, which was in Ransome’s possession for many years.

Another element of the project by this multi-disciplinary artist was a performance of children aged 8-13, working with Ms Babayan’s daughter, actor and director Persia Babayan-Taylor. They devised a performance based on the book of short stories and performed it at the Theatre by the Lake in February.

An exhibition using film, artists’ books, photography, painting, prints and objects, will explore the Altounyans in the context of Ms Babayan’s own family history. A limited edition map book, also produced by Wild Pansy Press, will link Aleppo to Coniston and the Altounyans to Ransome through the Leeds archive’s rich photographic history. Workshops with Leeds primary school children also fed into its creation.

The activities in Leeds flowed in part from a project funded by the Heritage Lottery Fund to help highlight Leeds University Library’s Special Collections, which include the Arthur Ransome Archive.

Chris Taylor, Professor of Fine Art Practice, is one of 18 Leeds academics allocated a collection each to champion. He has focused on the library’s Artists’ Book Collection, concentrating on how the collections can be interpreted for public audiences, such as the primary school workshops.

Mystery has surrounded the reasons why the relationship between Ernest Altounyan and Ransome and his Russian wife Evgenia cooled after the publication of his most famous book.

It was thought the seeds for this were planted during a three month visit by the Ransomes to Aleppo in 1932, when it is suggested they offered to adopt Titty and give her a better life in England; an offer which would surely have caused offence to a distinguished family of doctors.

But while Ms Babayan points out that there is no evidence to confirm or refute this claim, clues to what happened lie in the boxes of letters and diaries that form part of the Arthur Ransome Archive.

She has drawn on this partially-unpublished material, which includes an emotionally-charged letter from Ernest Altounyan to Arthur Ransome, sent following the hasty departure of the couple from Aleppo.

In his autobiography, the reasons given for their departure are mainly put down to Ransome’s ongoing health problems, exacerbated by life in Aleppo. But Ernest’s letter suggests that Ransome accused him of “managing” his wife Dora (née Collingwood) and of “keeping her out in the East for too long”.

Ms Babayan believes that an element of jealousy – perhaps regret – may have fuelled this argument on Arthur Ransome’s part: as a young man he had proposed to Dora.

“It was also a painful realisation by Ernest that his long friendship with Arthur, previously assumed to be on an equal footing, was in fact nothing of the sort,” she added.

The same revealing correspondence between author and doctor also claimed Ransome had suggested that the children would be “so out of it as to feel like savages”. The Ransomes were keen for the Altounyan children to receive a British education as they got older.

The shadow of genocide

Ms Babayan asserts that the Ransomes underestimated the strength of, and pride in, the Armenian family bond.

“The prospect of being separated from his family was too painful for Ernest to contemplate,” she said. “Members of his family had died in the Armenian genocide, which began in 1915.

“They were unable to return to their home town of Sivas in Ottoman Turkey and lost their farms and house in the area of Souookolook in the Syrian mountains. The family were instrumental in the relief of Armenian refugees who flooded into Aleppo during this time and were living amongst, treating and employing orphans and survivors.”

But the relationship between the two families was patched up and correspondence continued, mainly between Dora and Arthur, right up to her death in 1964. When the three eldest girls were eventually sent to a school in Bowness-on-Windermere, Arthur and Evgenia assisted by hosting the girls and taking them for trips.

“The girls found they were not at all behind their peers, but boarding school in England was an inevitable shock to the children, used as they were to a more unstructured education,” added Ms Babayan.

“They also suffered from the kind of name-calling endemic in schools and were cruelly nicknamed the ‘Three Zulus’ by their classmates.

“As the Altounyan children matured they remained very fond of Arthur and Evgenia, often sailing with them on the Norfolk Broads. But whether it was the initial disagreement in Aleppo or Ransome’s irritation with Ernest – who enjoyed and boasted of their family’s link to the books – which prompted the author to deny the children’s role in the inspiration for Swallows and Amazons in his autobiography, we will never know.” 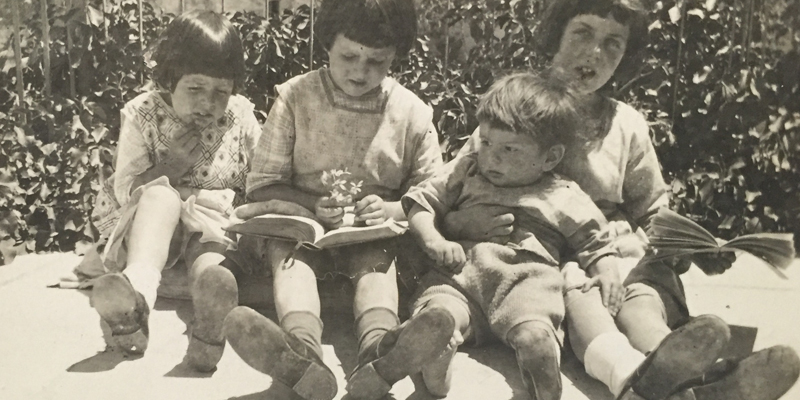 Karen Babayan was born in Iran to Armenian/British parents, moving to Leeds in 1978 just prior to the Islamic Revolution in 1979. Latterly she lived in the city’s Hyde Park area – a stone’s throw from the house in which Arthur Ransome was born. She has lived in Appleby, Cumbria since 2009. An established artist, Babayan has had more than 20 solo shows and participated in more than 50 group exhibitions since 1990, including The Tetley contemporary art gallery in Leeds and The Harris Art Gallery, Preston.

Wild Pansy Press, based in the University of Leeds' School of Fine Art, History of Art and Cultural Studies, seeks to develop partnerships with other groups to build a network with practitioners who explore and advance publication – in its widest sense – as both a distributional strategy and medium of practice.

Main image: Mavis Guzelian (née Altounyan), the inspiration for Titty, on the lap of an Armenian nanny while boating on Coniston Lake in the early 1920s with her older sisters Taqui (l) and Susie and their maternal aunt Barbara. Credit: © Guzelian Ltd

For images of the Altounyan children and Arthur Ransome, interviews and further information, contact University of Leeds Media Relations Manager Gareth Dant on +44(0)113 343 3996 or email g.j.dant@leeds.ac.uk