Rare handwritten manuscripts and printed books by the Brontës have been entrusted to the University's Brotherton Library.

The library will share many of the works with the British Library and the Brontë Parsonage Museum in Haworth – the three institutions are part of a consortium of nine cultural organisations, led by Friends of the National Libraries, which have raised more than £15 million to acquire the Honresfield Library, which also includes works by Jane Austen, Sir Walter Scott and Robert Burns.

The Honresfield Library had been in private ownership for 80 years and was due to be sold by Sotheby’s, potentially to another private owner. This could have ensured the items remained inaccessible to the public as well as to scholars.

The Brotherton Library contains the University’s research collections for languages and the arts. It will now permanently house first editions of Wuthering Heights, Agnes Grey and The Tenant of Wildfell Hall, as well as two letters by Branwell Brontë, and letters signed by Elizabeth Gaskell to Charlotte Brontë. It will also share a host of other treasures with the British Library and the Brontë Parsonage Museum.

At the core of this campaign was a wish to make works by literary giants accessible to all.

Masud Khokhar, University Librarian and Keeper of the Brotherton Collection, said: “At the core of this campaign was a wish to make works by literary giants accessible to all. Its success is an important moment for literature and these new pieces will create exciting research and scholarship opportunities across the globe.

“It is fitting that all of the Brontë treasures will, at various times, be housed in West Yorkshire, thanks to the partnership with the Brontë Parsonage Museum and the British Library. We look forward to working together on engagement opportunities. Next year, many will be on public display at the Treasures of the Brotherton Gallery, giving the public free access to these extraordinary works.”

Joanne Fitton, Associate Director: Special Collections and Galleries at the University said: “The manuscript letters by Branwell Brontë complement our substantial collection of materials relating to the brother. The collection gives a unique insight into his mind as he battled with addiction and a failed relationship.”

“We are very grateful to the Charles Brotherton Trust for its continued support of the Brotherton Collection and this appeal.”

Our literary heritage is our cultural DNA and this preserves it for students, teachers, academics and ordinary readers in perpetuity.

The campaign has been supported by HRH The Prince of Wales, a Patron of National Libraries. He said: “It is tremendous news for our country that Friends of the National Libraries, a charity of which I am proud to be Patron, has raised £15 million in just five months to save one of the most significant collections, including manuscripts by Charlotte Brontë, Walter Scott and Robert Burns.

“I can only congratulate the Chairman, Geordie Greig, and his team for saving the Blavatnik Honresfield Library for the nation, with its treasures now to be owned by some of our greatest national libraries across the U.K. Our literary heritage is our cultural DNA and this preserves it for students, teachers, academics and ordinary readers in perpetuity.”

About the Blavatnik Honresfield Library

The library was formed towards the end of the 19th century by William Law (1836-1901), a Rochdale mill owner, who created an exceptional collection of English and Scottish manuscripts and printed books.

The Brontës are at the heart of the collection, which also includes manuscripts in the hands of Jane Austen, Robert Burns and Sir Walter Scott and a significant collection of printed books. 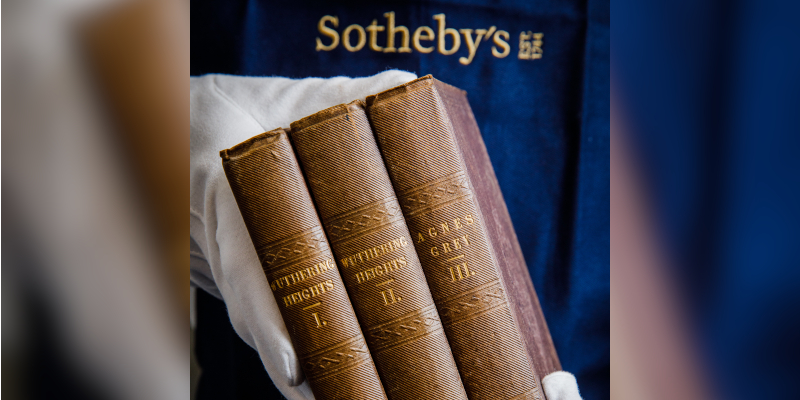 When the sale of the library was announced in May 2021, the vendors and Sotheby’s agreed to pause the auction so that funds could be raised to purchase it for the nation.

A consortium of libraries and museums convened by FNL raised over £15 million to acquire the Blavatnik Honresfield Library and distribute its works to appropriate libraries and museums across the UK. These are the Brontë Parsonage Museum, Haworth, the Brotherton Library, University of Leeds, the Bodleian Library, Oxford, Jane Austen’s House, Chawton, the National Library of Scotland, Edinburgh and Glasgow, Abbotsford: The Home of Walter Scott, Melrose, Scotland, the Robert Burns Birthplace Museum, Alloway (National Trust for Scotland.)

The success of the campaign would not have been possible without the generosity of its supporters, including principal donor Sir Leonard Blavatnik, whose contribution is the largest donation ever given in the UK by an individual for a literary treasure.

The National Heritage Memorial Fund (NHMF) has contributed a grant of £4 million, the largest it has ever awarded towards the acquisition of literary manuscripts.

Culture Secretary, Nadine Dorries, said: “It's such wonderful news that these books and manuscripts have been saved for the nation. I got to see this magical collection with my own eyes a few months ago. It's an irreplaceable piece of our literary history, and I'm so glad people across the country will now be able to enjoy it too."

Roly Keating, Chief Executive of the British Library, added: “The British Library is thrilled that this rare opportunity to save such an exceptional collection of literary treasures for the nation has been successful, and we are proud to have played a role in this great collaboration. We very much look forward to working with our partners at the Brontë Parsonage Museum and the Brotherton Library to care for the extraordinary works entrusted to us and help make them available for everyone to enjoy.”

Rebecca Yorke, Interim Director of the Brontë Parsonage Museum, said: “It has been an honour to be part of the consortium to save these significant items. We have strengthened existing relationships with both the British Library and the Brotherton and formed new partnerships with other museums and libraries. By working together we have ensured that these literary treasures will be accessible to all for years to come. It is a historic moment for us all.”

Main image shows a letter written by Branwell Brontë, which is among the items to be housed at the Brotherton Library.

For media enquiries, contact the University of Leeds press office at pressoffice@leeds.ac.uk.