Data analysis by researchers at the University of Leeds is revealing a second sharp drop in the number of people admitted to hospital in England with acute heart failure or a heart attack.

The decline may be linked to patients being reluctant to go to hospital out of a fear of contracting COVID-19.

“...if patients delay or avoid treatment, they will suffer life-limiting complications or they will die.”

Patient numbers declined sharply during the first wave of the pandemic and although they did rebound, they never returned to the levels seen before the pandemic. They began to fall sharply again as the numbers of COVID-19 infections began to surge ahead of the second lockdown in early November 2020.

From the beginning of October to 17 November, there was a 41 percent decline in admissions for people with heart failure and 34 percent with a heart attack - reductions similar to those seen during the first wave of the pandemic and which may have contributed to more than 2,000 excess deaths during the pandemic peak in England and Wales.

The latest findings, from a research group led by the University of Leeds, have been revealed in a letter - Second decline in admissions with heart failure and myocardial infarction during the COVID-19 pandemic - to the Journal of the American College of Cardiology.

In the letter, the scientists note: “The second dip appears of similar magnitude to that of the first, and signals that the public are fearful of attending hospital despite having medical emergencies...”

Chris Gale, Professor of Cardiovascular Medicine and Co-Director of the Leeds Institute for Data Analytics, supervised the data analysis. He said: “I am afraid that we are seeing a re-run of one of the preventable tragedies of the first wave - people were either too afraid to go to hospital for fear of contracting COVID-19 or were not referred for treatment.

“The message to patients needs to be clear. If they experience symptoms of a heart attack or acute heart failure, they need to attend hospital. These are unforgiving medical emergencies. With the right help, people can recover from them. But if patients delay or avoid treatment, they will suffer life-limiting complications – or they will die.”

Dr Jianhua Wu, Associate Professor at the University of Leeds, led the analysis. He said: “One of the worrying aspects of our research is that the decline we have seen since October may not have yet bottomed out. Inevitably there is a fear that will result in deaths that perhaps could have been avoided.”

Professor Simon Ray, President of the British Cardiovascular Society, added: “This research illustrates again the importance of the message that other medical problems don’t stop because of COVID and that people with serious problems like heart attack and acute heart failure still need to be seen and treated urgently to prevent death or long-term ill health.”

Figures for the daily admissions to hospital of people suffering acute heart failure or a heart attack are recorded on a national research database, the National Institute for Cardiovascular Outcomes Research. The Leeds research team compared daily admission rates before the pandemic with what happened during the first wave of the pandemic and then at the start of the second lockdown in England. The data was drawn from a group of English hospitals - 42 provided data on heart attack cases, 22 on heart failure. 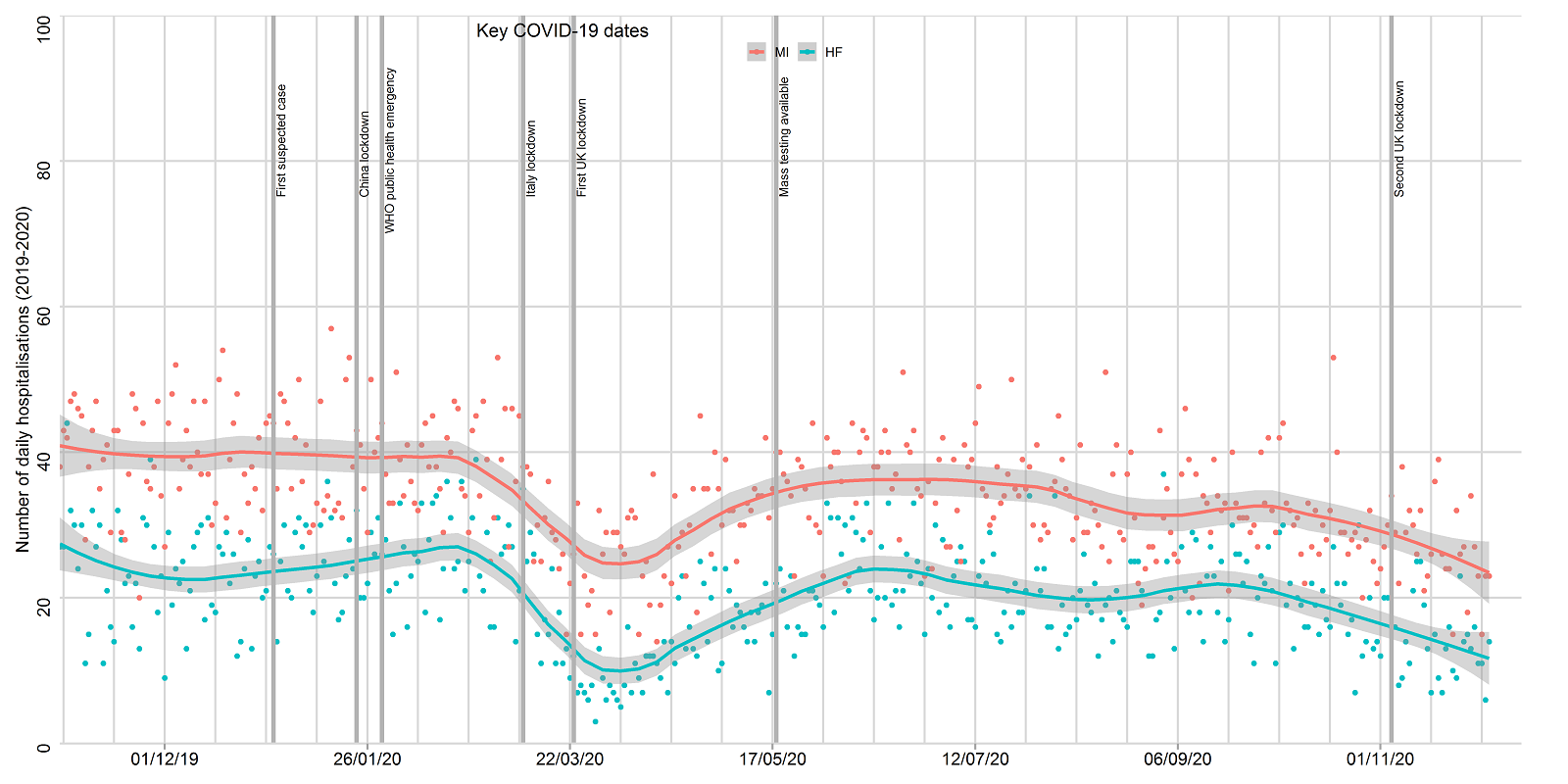 Since submitting their data analysis to the journal, the research team has received more up-to-date figures, which includes patient data for the whole of November, and it reveals a continuing drop in patient attendances.

Patient attendances began to drop ahead of the first lockdown, from 23 March 2020, and reached their lowest point in early April. By mid April, there was a 54 percent drop in people attending hospital emergency units with heat failure, and 32 percent reduction with a heart attack. Patient numbers did rebound towards the latter half of June but did not return fully to pre-pandemic levels.

For further information, please contact David Lewis in the press office at the University of Leeds: d.lewis@leeds.ac.uk