Intensive agriculture is taking a toll on bats in the Western Ghats of India, but shade-grown coffee, remnant rainforest patches and riverine vegetation strips may help struggling species hang on.

A team from the University of Leeds, UK, National Centre for Biological Sciences, Bangalore and Nature Conservation Foundation, Mysore, surveyed bats in the southern Western Ghats, one of the world’s most biodiverse regions, in the first detailed study of the impact of rainforest fragmentation and plantations on bats.

Professor John Altringham, of the University of Leeds’ Faculty of Biological Sciences, said they found several species were having difficulty in the transformed landscape - but also found hopeful signs that remaining forest fragments and wildlife-friendly agriculture could offer a lifeline.

Professor Altringham said: “The Western Ghats region is the eighth most biodiverse place in the world but has the highest human population of any of the biodiversity hotspots.

“Historical land use change and development has left only 6% of the original habitat in the region. By looking at bats—which are excellent bioindicators—we are able to learn not only what these changes in the environment mean for bats, but also for wildlife in general.”

The team, who publish their findings in the journal Biological Conservation today, used geographic information system (GIS) computer modelling to look at the relationships between the presence of 10 different bat species and the features of the habitats in which they were found.

The bats were located by a combination of capture and recording of echolocation calls. The researchers used the information gathered over three years to build ‘habitat suitability models’, to predict what areas would be good habitat for each species across the entire study area.

Dr Claire Wordley, the lead researcher at Leeds on the study, said: “Most species preferred forest fragments and the rivers associated with them. No species favoured tea plantations, though a number could make use of them. Two of the bat species we studied, the lesser woolly horseshoe bat and the lesser false vampire bat, were never seen in tea plantations.

“Further deforestation would be a serious threat to these species, but the good news is that they are, for the moment, surviving in small forest patches, riverine habitats and in coffee plantations.

“One of the most hopeful findings was that shade-grown coffee plantations—in which arabica coffee is grown under a canopy of native tree species – had bat communities almost as rich as forest patches. They are serving as refuges for biodiversity in the landscape - both the lesser woolly horseshoe bat and the lesser false vampire bat were found in these shade-grown plantations.” 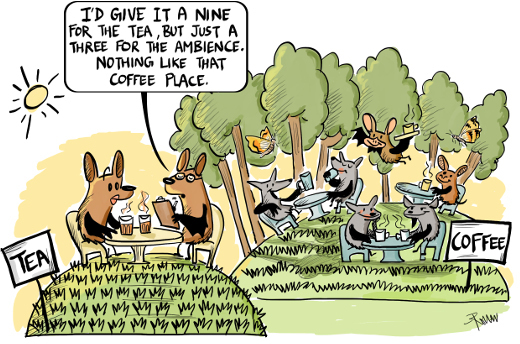 Two coffee species dominate the global coffee market: Coffea arabica, which is generally preferred for its taste, and the more robust Coffea canephora (robusta). Both types are cultivated in the Western Ghats, but it is only arabica that is grown in the shade of native rainforest trees, where the slow maturation of the beans produces the rich and complex flavours of the best coffees.

“These shade-grown plantations keep the native forest canopy but replace the lower layers of vegetation with coffee. The coffee bushes grow really big and when you walk through these plantations the richness of the wildlife is obvious - you see monkeys, Indian bison and elephants. We found that they were a really important stronghold for bat species, not quite as good as the forest patches but much better than the tea,” Dr Wordley added.

Professor Altringham continued: “If bats and other wildlife are to thrive in the Ghats, a careful balance of land use is necessary. Remnant forest patches and shade-grown coffee act as refuges for wildlife, which can then, to some extent, make use of tea plantations and other agricultural areas. In the tea plantations that keep forest patches on their land, especially along rivers, many bat species can thrive.

“The work of the Nature Conservation Foundation to restore and extend these refuges, and encourage the planting of native trees elsewhere in the landscape, is excellent news for wildlife. The retention of native trees in forest patches, along rivers and use of native species of trees for shade in coffee and tea plantations also prevents soil erosion, reduces the risk of landslides and enriches the soil, benefitting people as well as biodiversity.”

The study was funded by the Natural Environment Research Council (NERC) and the UK India Education Research Initiative (UKIERI), and supported by Tamil Nadu Forest Department and many plantation companies in the Western Ghats.

Dr Wordley and Professor Altringham are available for interview. Contact the University of Leeds press office on 0113 343 4031 or email pressoffice@leeds.ac.uk

Photographs from the study, audio and a cartoon are available and should be credited to the individual named in the file. They can be accessed here or available on pressoffice@leeds.ac.uk

The full paper: C. Wordley et al., “Landscape scale habitat suitability modelling of bats in the Western Ghats of India: bats like something in their tea,” is published in Biological Conservation.