Scientists and world leaders are convening in Paris to tackle climate change, and the University of Leeds is well represented at the talks, offering a wealth of expertise in climate change science.

A University of Leeds PhD student helped to launch the Youth and Future Generations Day at the UN climate conference in Paris this morning.

In her opening remarks, PhD student Harriet Thew thanked Christiana Figueres, Executive Secretary of the UN Framework Convention on Climate Change (UNFCCC), and Ahmad Alhendawi, United Nations Secretary-General's Envoy on Youth, for their efforts in including young people in the COP21 conference. 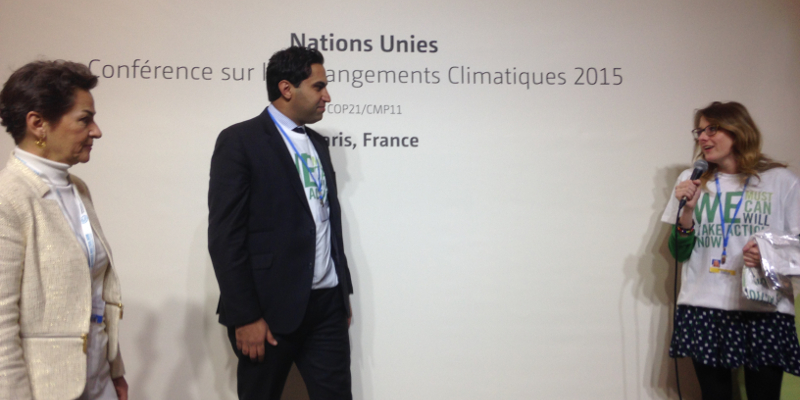 Miss Thew, from the University’s School of Earth and Environment, published a working paper in July 2015 on youth participation in the climate talks, based on a study performed in collaboration with YOUNGO – the official constituency for youth non-governmental organisations in the UNFCCC.

The study involved interviews with young people and negotiators from around the world about how much impact they thought young people have within the climate negotiations.

Miss Thew found that young people who had direct access to negotiators and believed that they would be listened to arranged face-to-face meetings and were able to build positive working relationships. They contributed to certain aspects of the talks, such as education, where youth input is particularly valued.

“This led to positive perceptions of the negotiation process and a desire to work within it,” said Miss Thew.

“In contrast, young people who felt that they would be ignored on account of their youth didn’t arrange face-to-face meetings as they thought negotiators wouldn’t listen to them anyway.

Instead they took part in small protests within the UN conference centre, sometimes with the intention of disrupting the negotiations and often directly criticising negotiators rather than offering constructive suggestions, believing this to be the only way to have any impact. The negotiators I spoke to did not respond well to this approach and it discouraged them from engaging with young people in the future.”

In addition to having valuable input into climate talks, Miss Thew believes that young people can support countries who can’t afford to send big delegations of negotiators to climate talks by tracking certain parts of the negotiations and reporting back, increasing the equity of the process.

“But they can’t do this if they aren’t allowed in the negotiation rooms, so it is important for these spaces to be open to non-governmental observers,” concluded Miss Thew.

At the United Nation’s 21st Conference of the Parties (COP21) conference, which will be held 30 November to 11 December, will be Professor Andy Gouldson, Professor John Barrett, Dr Monica di Gregorio and PhD student Harriet Thew (all from the School of Earth and Environment) and PhD students Richard Riley and Harriet Fletcher (from the Doctoral Training Centre in Low Carbon Technologies).

The University’s climate research is wide-ranging and includes studies on creating ‘climate smart cities’ and bioenergy fuel sources, the effects of deforestation and consumption-based emissions, as well as research to analyse youth participation in climate science.

Students and alumni of the University of Leeds have also created a short documentary film about the path to Paris and why this COP should be different to previous years, which failed to reach an agreement on how to address climate change. The film, called Atmosphere, is directed by postgraduate student Nick Roxburgh from the University’s School of Earth and Environment and is the result of a successful crowd-funding campaign.

You can find some of the latest coverage of the University’s climate change research below. Please keep checking back to see the latest news at the COP conference progresses.

A webcast of the UN’s conference is available to watch here.

The documentary film Atmosphere, created by students and alumni of the University of Leeds, is available to watch here.

For media enquiries, please contact Sarah Reed, Press Officer at the University of Leeds, on 0113 34 34196 or email s.j.reed@leeds.ac.uk.