As part of his first official visit to the UK, Guðni Th. Jóhannesson last night addressed The Future of Wild Europe, a conference examining various aspects of the wild places of Europe, “rewilding”, and how we perceive and value wild lands.

The conference, co-organised by the School of English and School of Earth and Environment at the University, also heard from filmmaker and explorer Céline Cousteau, granddaughter of marine conservation pioneer Jacques Cousteau.

President Jóhannesson, who swept to power earlier this year, spoke about “The past and future of wild Iceland”, explaining how people have only lived in Iceland for about 1,000 years. Since then, it has been subjected to continual attempts to “un-wild” its large swathes of untouched land, raising questions about how Iceland may be “re-wilded” in the future. 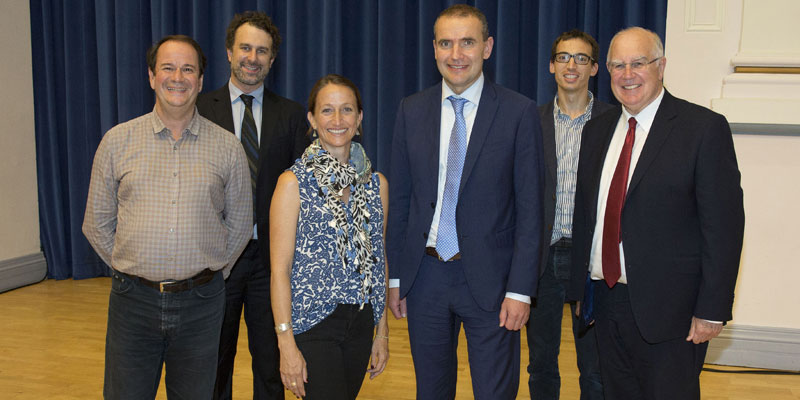 These include: what are the benefits of returning the land to its pre-inhabited state? How would this affect the populations of the country, both human and non-human? Can woods be regrown, and wetlands restored? How can we minimise human impact on areas that have suffered from the development of infrastructure?

President Jóhannesson addressed these questions and explored the story of Iceland’s wild lands and how they have been altered by human settlers over the last millennium.

As part of his time in Leeds, he was shown the University Library’s extensive Icelandic Collection, used by scholars of Modern and Old Icelandic alike, and paid a visit to the School of Earth and Environment to meet several of the University’s renowned vulcanologists.

Céline Cousteau talked about the work of her father, Jean-Michel Cousteau, the legacy of her grandfather, Jacques Cousteau, and her many years of exploring and mapping the world through oceanography. She brought to the audience’s attention the fragility of our underwater ecosystems.

She also offered her own thoughts on how humanity can protect, preserve, and celebrate life in the oceans, which depend on – as well as support – other forms of life across the rest of the planet, including, of course, human life.

Introducing the speakers, University of Leeds Vice-Chancellor Sir Alan Langlands said: "There is a playfulness about the conference programme which appealed to me, but it gives way to a much more serious purpose – the compelling notion of generating new research which examines the relationship between the environment and human culture and society – an issue of great importance to us all.

"This evening is also a new beginning – demarcating two big EU projects at Leeds: the ENHANCE Marie Curie Environmental Humanities project which is sponsoring this conference, and the Arctic Encounters project, a groundbreaking research programme which has been looking at the role of cultural tourism in fashioning 21st understandings of the European Arctic."

Other speakers during the five-day conference included writer, vet and barrister Charles Foster, author of Being a Beast – as part of his philosophical investigations relating to authenticity and identity, he tried living as various animals, including a badger.

At the weekend, delegates enjoyed a family day at Potteric Carr nature reserve, near Doncaster, and a field trip to the Scar Close rewilding site in the Yorkshire Dales.

One of the conference organisers, Professor Graham Huggan, from the School of English, said: “We welcome the different approaches the conference has shown to current problems attached to rewilding and conservation more generally. We also appreciate the valuable work being done by humanities scholars as well as by social and natural scientists in these areas.”

The conference, aimed at early-career researchers, has been organised by the University in conjunction with an EU-funded international doctoral programme that includes the University of Munich, the Deutsches Museum in Munich, and the Royal Institute of Technology, Stockholm.

For further information about the conference, see www.enhanceitn.eu/thefutureofwildeurope/