Urgent action to reduce sea temperatures is needed, as 2015-2016 saw record highs that triggered significant coral bleaching across the tropics and the Australian Great Barrier Reef.

Coral researchers including two experts from the University of Leeds are now carrying out new aerial and underwater surveys along the Great Barrier Reef and elsewhere in Australia as bleaching reappears again this year.

The announcement coincides with the release of a study in the journal Nature warning the reef’s resilience is rapidly waning.

The Great Barrier Reef is built by corals, a diverse group of marine invertebrates which form the reefs. The corals have been heavily bleached three times since records began in the 1980s, each time worse than the last.

The most recent bleaching was in 2016, when 85 per cent of reefs were damaged.

Bleaching is caused by thermal stress – high water temperatures during marine heatwaves – which disrupts the relationship between corals and the algae living within them. This causes the coral to lose its colour, leaves it physiologically damaged and can result in its death.

A 46-strong team of researchers including Dr Maria Beger from the Faculty of Biological Sciences, at the University of Leeds, have carried out an extensive aerial and underwater surveys of the reefs and combined them with sea surface temperature information gathered by satellites. Dr Beger's colleague, Dr Brigitte Sommer, who now works at Leeds also contributed to the research while she was based at the University of Queensland.

Reef in danger: Underwater footage recorded as part of the project shows the extent of the damaged corals on the reef. (Film courtesy Australian Research Council Centre of Excellence for Coral Reef Studies, James Cook University.)

“The severity of the 2016 bleaching was off the chart,” said lead author, Professor Terry Hughes from the Australian research Council Centre of Excellence for Coral Reef Studies at James Cook University in Australia.

“It was the third major bleaching to affect the Great Barrier Reef, following earlier heatwaves in 1998 and 2002. Now we’re gearing up to study a potential number four.”

Hotter than usual water caused by global warming was the main cause of bleaching, and Dr Beger said this latest warning on the dangers of global warming highlighted the risks of repeated exposure to unusually hot conditions.

“The Great Barrier Reef is one of the most outstanding phenomena of the natural world,” she said. “We now have evidence global warming is the leading threat to its continued existence.

"The coral supports hundreds of thousands of life forms including fish, but most of it will die by the time my kids are my age without action by governments and business to reduce global warming.”

Professor Hughes added: “It broke my heart to see so many coral dying on northern reefs on the Great Barrier Reef in 2016. With rising temperatures due to global warming, it’s only a matter of time before we see more of these events.” 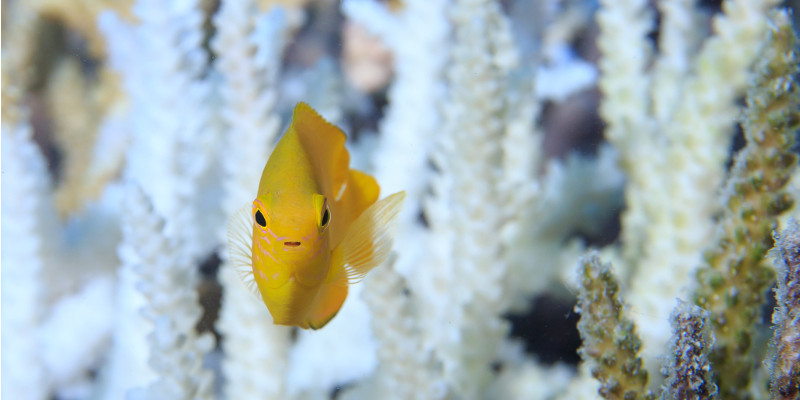 Living species: Coral is a living organism, which is home to many other species including algae and fish.

Although there have been gaps of several years between past bleaching events, it has already started to be detected this year, less than 12 months after the last occasion, and Professor Hughes added: “A fourth event after only one year would be a major blow to the reef”.

The research team said while some studies had indicated prior exposure to bleaching could create resistance in corals to future incidents, their analysis of 171 sites showed it did not lessen the severity of the damage in the 2016 bleaching.

Their study did find that storms and cyclones could be a bonus for heat affected coral by cooling the seas, reducing the impact of rising temperatures.

The study also reveals that protecting reefs from fishing, and improving water quality, makes no difference to the amount of bleaching during extreme heatwaves, although it might help them recover in the longer term.

The reality of warming oceans means that coral bleaching is the new normal and threatens reefs on a global scale, the research paper states.

The paper Global warming and recurrent mass bleaching of corals, is published in the journal Nature on 15 March.

Dr Maria Beger is available for interview, please call Peter Le Riche in the University of Leeds press office on 0113 343 2049 or email p.leriche@leeds.ac.uk