Beliefs in magical creatures can impact the protection of biodiversity, and the field of conservation needs to consider them seriously, researchers have warned.

According to a new study, by academics at the University of Leeds and Cardiff University, the conservation of threatened species has much to gain from acknowledging people’s spiritual, magical and cultural beliefs.

The study, published today in the journal Oryx, draws on examples from countries including Madagascar, Iceland, Scotland, Ethiopia and Tanzania. It provides a picture of the positive and negative impacts mythical creatures have had on conservation.

Lead author Dr George Holmes, from the School of Earth and Environment at Leeds, said: “It is difficult to predict how magical creatures can affect conservation goals. There are examples of myths and superstitions seriously harming the survival of certain species, and examples where they actually help species to survive.”

“Current views of magical animals within the field of conservation are inadequate, as they are unable to deal with what many would see as irrational beliefs and behaviours.”

“What we need is a more interdisciplinary approach to conservation that helps us to understand the interactions between humans and both living and magical biodiversity.”

Co-author Caroline Ward, postgraduate researcher at the University of Leeds, said: “Madagascar really exemplifies the need to understand people’s magical beliefs, as there are examples where oversimplification of these beliefs has led to unexpected conservation outcomes.”

These taboos can result in protection for species, and have been encouraged by conservation projects seeking to strengthen these local beliefs. The taboos are often promoted as demonstrating how conservation can align with tradition, and have even been linked to the historically low prevalence of bushmeat hunting in Madagascar.

One such fady has been promoted to prevent extinction of the critically endangered radiated tortoise, which local Malagasy people refuse to harm, and in some cases even touch, for fear of spiritual retribution.

However, the locals would not stop ‘outsiders’ from harming or removing the tortoises as they were not seen to be bound by the local rules. This illustrates the challenges of fully understanding the impact that magical beliefs can have on species conservation. 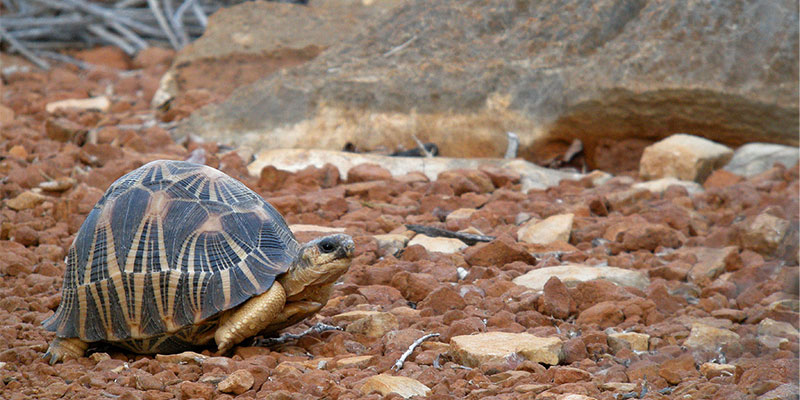 The study also describes instances in Madagascar where fadys result in the persecution of certain animals. The aye-aye (pictured in main image) is believed to be the harbinger of evil, with its appearance predicting the death or sickness of someone in the village.

Some believe that aye-ayes sneak into houses and murder the sleeping occupants using their long middle fingers to puncture the victim’s aorta. In order to prevent bad luck, the local taboo says that aye-ayes must be killed and displayed on roadside poles.

The fady-related killing of aye-ayes is listed as a key threat to their survival on the International Union for Conservation of Nature’s Red List, which classifies the species as endangered.

Dr George Holmes, Associate Professor at Leeds, said: “We are currently ill-prepared to conserve species which attract irrational human beliefs. Our research suggests that conservationists should look to new, broader approaches such as multi-species ethnography if they want to better understand how magical creatures might impact conservation.”

In 2013, a court case fought against a proposed new highway in Iceland because it would cross the habitat of a valued species – the Icelandic elves, or Huldufólk.

In 2015, 350,000 people visited a thriving ecotourist site in Scotland because it is allegedly inhabited by a rare, endemic animal – the Loch Ness Monster. This mythical creature thus helped draw in revenue for the conservation and management of the area, as well as providing substantial economic value to the region.

In Ethiopia, spotted hyenas are tolerated and even fed by hand in some areas, as they are believed to consume evil spirits with their cackles, in addition to their role predating upon crop-raiding herbivores. #

Featured in the BBC’s Planet Earth II, spotted hyena numbers have declined in some locations, particularly near growing urban areas, so these beliefs have helped to support their populations. 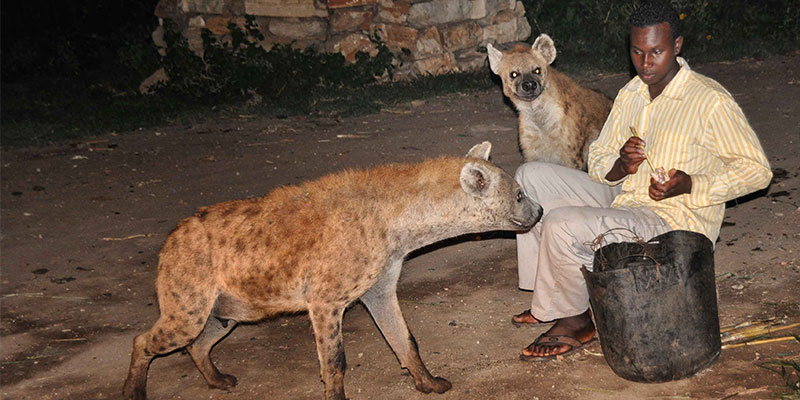 Spotted hyenas being fed by hand in the city of Harar, Ethiopia. Image credit: Rod Waddington

Co-author Dr Thomas Smith, from Cardiff University, said: “We really need to open up a discussion about how fantastic beasts can affect our ability to conserve the natural world, because there are no simple cases. Conservationists ignore mythical creatures at the peril of both biodiversity and the local people that live near or within significant conservation sites.”

“Further research into the impact of magical creatures on conservation and local people is required if we are to effectively conserve the world’s endangered species.”

‘Fantastic beasts and why to conserve them: animals, magic and biodiversity conservation’ was published today in the conservation journal Oryx.

Dr George Holmes and Caroline Ward are available for interview. Please contact Simon Moore in the University press office at +44 (0)113 34 34031 or s.i.moore@leeds.ac.uk for further information.