New research strongly suggests the distinct "oxygenation events" which created Earth’s breathable atmosphere happened spontaneously, rather than as a consequence of biological or tectonic revolutions.

The Leeds study, published in the journal Science, not only shines a light on the history of oxygen on our planet, it gives new insight into the prevalence of oxygenated worlds other than our own.

The early Earth had no oxygen in its atmosphere, or oceans, until roughly 2.4 billion years ago when the first of three major oxygenation events occurred. The reasons for these "stepwise" increases of oxygen on Earth have been the subject of ongoing scientific debate.

In a new study, Leeds researchers modified a well-established conceptual model of marine biogeochemistry so that it could be run across the whole of Earth history, and found that it produced the three oxygenation events all by itself.

Their findings suggest that beyond early photosynthetic microbes and the initiation of plate tectonics – both of which were established by around three billion years ago – it was simply a matter of time before oxygen would reach the necessary level to support complex life.

“This research really tests our understanding of how the Earth became oxygen rich, and thus able to support intelligent life.”

Study lead author Lewis Alcott, a postgraduate researcher in the School of Earth and Environment at Leeds, said: “This research really tests our understanding of how the Earth became oxygen rich, and thus became able to support intelligent life.

“Based on this work, it seems that oxygenated planets may be much more common than previously thought, because they do not require multiple – and very unlikely – biological advances, or chance happenings of tectonics.”

Large animals with high energy demands require high levels of oxygen, and evolved soon after the last of these steps, ultimately evolving into dinosaurs and mammals.

Currently, the two prevailing theories suggest the drivers of these oxygenation events were either major steps in biological revolutions – where the evolution of progressively more complex lifeforms essentially “bioengineered” oxygenation to higher levels; or tectonic revolutions – where oxygen rose due to shifts in the style of volcanism or make-up of the crust.

The new study instead highlights a set of feedbacks that exist between the global phosphorus, carbon and oxygen cycles, which are capable of driving rapid shifts in ocean and atmospheric oxygen levels without requiring any "stepwise" change in either tectonics or biology. 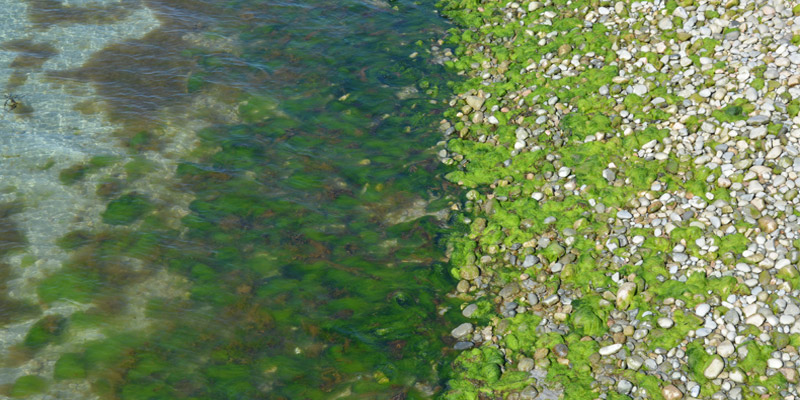 Study co-author Professor Simon Poulton, also from the School of Earth and Environment at Leeds, said: “Our model suggests that oxygenation of the Earth to a level that can sustain complex life was inevitable, once the microbes that produce oxygen had evolved.”

The authors' "Earth system" model of the feedbacks reproduces the observed three-step oxygenation pattern when driven solely by a gradual shift from reducing to oxidising surface conditions over time. The transitions are driven by the way the marine phosphorus cycle responds to changing oxygen levels, and how this impacts photosynthesis, which requires phosphorus.

Senior author Dr Benjamin Mills, who leads the biogeochemical modelling group at Leeds, said: “The model demonstrates that a gradual oxygenation of Earth’s surface over time should result in distinct oxygenation events in the atmosphere and oceans, comparable to those seen in the geological record.

“Our work shows that the relationship between the global phosphorus, carbon and oxygen cycles is fundamental to understanding the oxygenation history of the Earth. This could help us to better understand how a planet other than our own may become habitable.”

The paper, Stepwise Earth oxygenation is an inherent property of global biogeochemical cycling, is published online in Science on 10 December 2019.