For the first time scientists have provided clear evidence that tropical tree lifespan decreases above a critical temperature threshold.

Findings published in the journal PNAS (Proceedings of the National Academy of Sciences) show that across the tropics, tree lifespans decrease for temperatures above 25°C.

Although tropical rainforests account for only 7% of all land, they are home to about 50% of all animal and plant species, and approximately 50% of forest carbon stocks on Earth. Thus small changes in the functioning of tropical forests can significantly change the atmospheric levels of CO2 – the most important anthropogenic greenhouse gas.

Professor Manuel Gloor and Dr Roel Brienen, of Leeds’ School of Geography, are co-authors of the new study.

Professor Gloor said: “Many regions in the tropics are heating up particularly rapidly and substantial areas will become warmer, on average, than approximately 25°C.

“Our findings – which are the first to demonstrate that there is a temperature threshold – suggests that for trees in these regions, their longevity is likely to be negatively affected.”

Dr Brienen added: “This indicates that tropical forests may be more vulnerable to increasing heat than has been previously thought. As a result of global warming, we therefore expect a shortening of tree lifespans in the tropics.

“These results are a warning sign that, along with deforestation, global warming adds extra stress on the Earth’s tropical forests.” 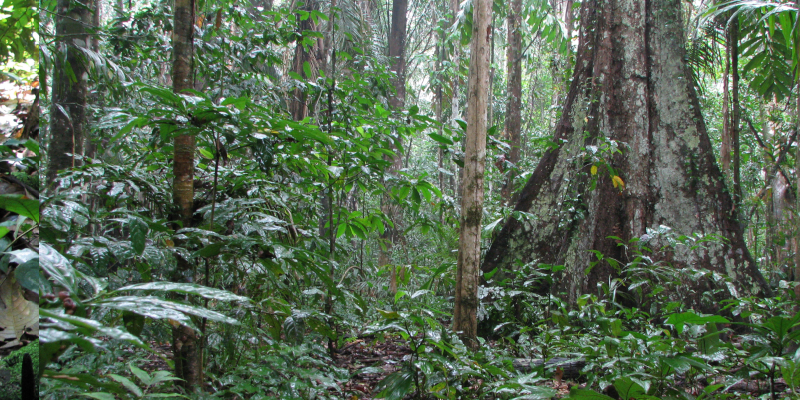 The research team, led by Dr Giuliano Locosselli, from the Institute of Biosciences at Brazil's University of São Paulo, spent four years examining tree-ring data from more than 100,000 trees worldwide belonging to 400 different tree species from 3,000 sites across the globe.

Dr Locosselli said: “In the tropics, trees grow, on average, twice as fast as those in cooler regions of the world. But they also have a shorter average lifespan of 186 years, compared to 322 years of trees in other climates. Our analysis suggests that the life-spans in the tropics will likely decrease further still.

“If tropical trees die earlier, this will affect how much carbon these forests can hold, raising concerns about the future potential of forests to offset CO2 emissions from fossil fuel burning. It could also cause changes in biodiversity and a decrease in the number of species on the planet.”

Currently, average temperatures in tropical rainforests vary between 21°C and 30°C. According to the latest forecasts, tropical temperatures on land will continue to rise, reaching on average a combined 2.5°C above pre-industrial levels over the next 10 to 20 years. The study also shows that temperature effects on tree longevity will be further exacerbated by dry conditions.

Climate change will also have an impact on tropical rainforests outside of South America, such as the Congo Forest in west Africa – the second largest tropical forest in the world after the Amazon.

Dr Locosselli added: “While tropical rainforests in the Amazon are already close to this temperature threshold temperatures in the Congo are lower. But, with this great increase in temperature, we might begin to see signs of increased tree mortality. From this point of view, the scenario is quite bleak.”

Professor Marcos Buckeridge, Director of the Biosciences Institute of the University of São Paulo, who is also a co-author of the study, added: “Temperatures will keep rising in the near future even if we were to take drastic emissions reductions measures.

“Thus it is unavoidable that the critical threshold for tree longevity will increasingly be exceeded in the tropics and thus it is even more important to protect tropical forests and curb greenhouse emissions.”

World Meteorological Organization (WMO) data shows that the average global temperature between 2016 and 2020 is among the warmest compared to any other period.

It is currently estimated at 0.24°C warmer than the global average for 2011–2015. Data from NASA and National Oceanographic and Atmospheric Administration (NOAA) pointed to the years 2016 and 2019 as the first and second warmest of all time, respectively.

The research team evaluated growth ring data from more than 100,000 trees worldwide. Each of these rings, located on the trunks, represents a year of plant life, allowing an estimate of the age of the trees and the speed (rate) of growth. Researchers also analysed how the climate influences the life span of the trees.