Drones, robots and autonomous systems can transform the natural world in and around cities for people and wildlife.

International research, involving over 170 experts and led by the University of Leeds, assessed the opportunities and challenges that this cutting-edge technology could have for urban nature and green spaces.

The researchers highlighted opportunities to improve how we monitor nature, such as identifying emerging pests and ensuring plants are cared for, and helping people engage with and appreciate the natural world around them.

But the researchers also warned that advances in robotics and automation could be damaging to the environment.

“As a society, it is vital that we proactively try to understand any possible side effects and risks of our growing use of robots and automated systems.”

For instance, robots and drones might generate new sources of waste and pollution themselves, with potentially substantial negative implications for urban nature. Cities might have to be re-planned to provide enough room for robots and drones to operate, possibly leading to a loss of green space. And they could also increase existing social inequalities, such as unequal access to green space.

Lead author Dr Martin Dallimer, from the School of Earth and Environment at the University of Leeds, said: “Technology, such as robotics, has the potential to change almost every aspect of our lives. As a society, it is vital that we proactively try to understand any possible side effects and risks of our growing use of robots and automated systems.

“Although the future impacts on urban green spaces and nature are hard to predict, we need to make sure that the public, policy makers and robotics developers are aware of the potential pros and cons, so we can avoid detrimental consequences and fully realise the benefits.”

The research, published today in Nature Ecology & Evolution, is authored by a team of 77 academics and practitioners.

Growing use of robotics

The researchers conducted an online survey of 170 experts from 35 countries, which they say provides a current best guess of what the future could hold.

Participants gave their views on the potential opportunities and challenges for urban biodiversity and ecosystems, from the growing use of robotics and autonomous systems. These are defined as technologies that can sense, analyse, interact with and manipulate their physical environment. This includes unmanned aerial vehicles (drones), self-driving cars, robots able to repair infrastructure, and wireless sensor networks used for monitoring. 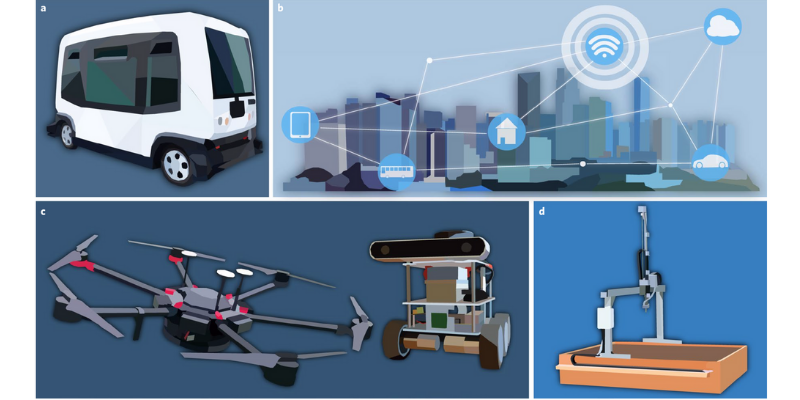 These technologies have a large range of potential applications, such as autonomous transport, waste collection, infrastructure maintenance and repair, policing and precision agriculture.

The research was conducted as part of Leeds’ Self Repairing Cities project, which aims to enable robots and autonomous systems to maintain urban infrastructure without causing disruption to citizens.

First author Dr Mark Goddard conducted the work whilst at the University of Leeds and is now based at Northumbria University. He said: “Spending time in urban green spaces and interacting with nature brings a range of human health and well-being benefits, and robots are likely to transform many of the ways in which we experience and gain benefits from urban nature.

“Understanding how robotics and autonomous systems will affect our interaction with nature is vital for ensuring that our future cities support wildlife that is accessible to all.”

This work was funded by the Engineering and Physical Sciences Research Council (EPSRC).

The paper is titled ‘A global horizon scan of the future impacts of robotics and autonomous systems on urban ecosystems’ and is published in Nature Ecology & Evolution.