Eroded seabed rocks are providing an essential source of nutrition for drifting marine organisms at the base of the food chain, according to new research.

The findings, led by the University, show that iron – an essential nutrient for microscopic marine algae known as phytoplankton – is being released from sediments on the deep ocean floor.

The research shows that, contrary to the expectation that oxygen in the deep sea prevents dissolved iron from escaping the seafloor, a combination of oxygen and organic matter may actually encourage the release of iron from sediments into the ocean.

Published today in the Proceedings of the National Academy of Science of the USA (PNAS), the research could influence future approaches to studying the ocean carbon cycle and managing the marine environment, which must consider effects of seafloor processes on marine ecology.

“Our findings... pave a new way of thinking about the seafloor.”

Report lead author is Dr Will Homoky, a University Academic Fellow at Leeds’ School of Earth and Environment.

He said: “Our findings reveal that the shallow surface of the deep seafloor provides an important source of iron – a scarce micronutrient – for the ocean.

“We show that the degradation of rock minerals with organic matter and oxygen is a recipe to produce tiny rust particles, which are small enough to be dissolved and carried in seawater.

“These tiny rust particles and their chemical signatures explain how iron found in large parts of the ocean interior could have come from deep ocean sediments, in a manner which was once thought to be practically impossible.” 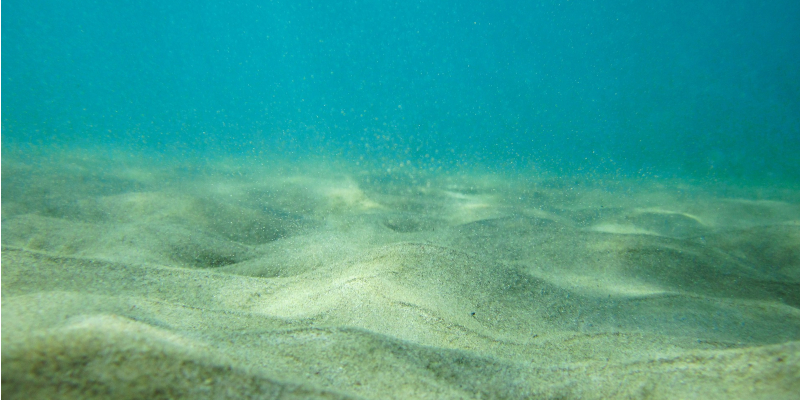 The nanometre-sized iron particles, known as colloids, could provide an important source of nutrition for phytoplankton, which provide the primary food source for a wide range of sea creatures, affecting global food chains.

The phytoplankton are also important amid rising worldwide pollution levels, as they help the ocean remove about one quarter of carbon dioxide emitted annually to the atmosphere.

The findings will help shape further study of the processes that regulate the occurrence of iron in the world’s oceans and the role they play in moderating marine life and atmospheric carbon dioxide.

Dr Homoky added: “Our findings here are significant because they mark a turning point in the way we view iron supply from sediments and its potential to reach marine life that paves a new way of thinking about the seafloor.

“Our discovered production of iron colloids is different to other forms of iron supplied to the ocean, and will help us design a new generation of ocean models to re-evaluate marine life and climate connections to the seafloor – where large uncertainty currently exists.

“This could help us to better understand how iron in the ocean has contributed to past productivity and climatic variations and inform our approaches to marine conservation and management.”

The research team analysed tiny and precise variations within the fluid content of sediment samples collected from the South Atlantic Ocean at water depths ranging from 60m down to 5km.

They aimed to understand how the chemical – or isotope – signatures of nano-sized iron in the sediment fluids had been formed, and what this tells us about iron supply processes to the ocean.

Report co-author Dr Tim Conway is Assistant Professor at University of South Florida. He said: “We can now measure tiny but important variations in the chemical make-up of seawater that were beyond our reach a decade ago.

“Here we have characterised an isotope signature belonging to the iron colloids produced in deep ocean sediments that we can use to trace their journey in the ocean.

“Our continuing goal is to learn how far this iron travels and how much of it nourishes our marine food webs around the globe.”

Iron colloids dominate sedimentary supply to the ocean interior is published 22 March 2021 in the Proceedings of the National Academy of Science of the USA (PNAS). DOI:10.1073/pnas.2016078118

Additional funding for the research was provided by the European Research Council under the European Union’s Horizon 2020 research and innovation program.