An international team of scientists estimate that there are 14% more tree species than previously thought.

The study involved more than 100 scientists from across the globe, including University of Leeds researchers, and the largest forest database yet assembled. The study, published in the journal PNAS found that there are roughly 73,000 tree species, including about 9,200 species yet to be discovered.

To estimate the number of tree species around the world, the team used networks of ecological plots which contained tree abundance and occurrence data. The findings would not have been possible without tropical forest experts working with the RAINFOR, AfriTRON, and ForestPlots.net networks, all coordinated from the University of Leeds.

The study, led by Purdue University in the US, reveals that roughly 40% of undiscovered tree species are in South America and potentially one-third of all tree species not yet discovered may be rare, with very low populations and limited spatial distribution.

These findings highlight the vulnerability of global forest biodiversity to human-made changes in land use and climate, which disproportionately threaten rare species.

Co-author and Professor of Tropical Ecology at Leeds Oliver Phillips, said: “Knowing how many species there are – and especially where diversity and rare species are concentrated – is essential if we are to protect them, the carbon they store, and the myriad other unique plants and creatures sheltered beneath their boughs.” 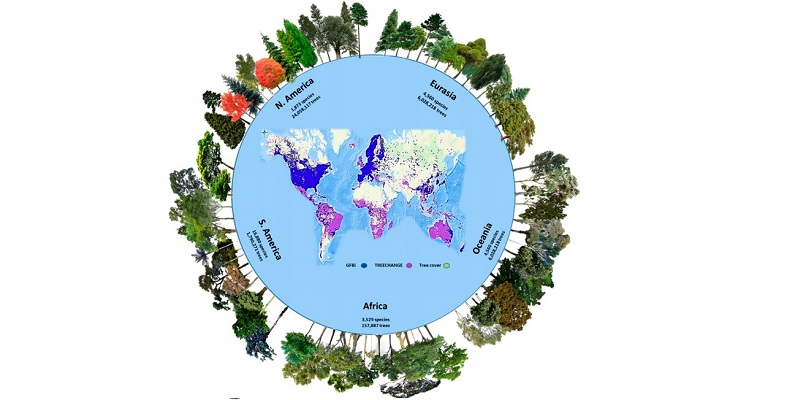 The number of tree species and individuals per continent in the Global Forest Biodiversity Initiative database. Green areas represent the global tree cover. Depicted here are some of the most frequent species recorded in each continent. Credit: PNAS paper

Professor Phillips added: “With 3,900 tree species yet to be discovered in this one continent, our analysis shows that many are concentrated in endangered hotspots of diversity where the Amazon forest meets the Andes in Peru, Colombia, Ecuador, Venezuela and Bolivia.

“This makes forest science and conservation of paramount priority in South America.”

Read Professor Phillips’ Medium article about the challenges and importance of global collaboration in answering the question “How many tree species are there on Earth?”