Jamie Oliver’s back-to-basics approach to improving our diets works, according to a new study.

Researchers at the University of Leeds found that men and women who attended one of the celebrity chef’s eight-week Ministry of Food (MoF) courses showed significant improvements in their eating habits.

The participants greatly increased their intake of fruit and vegetables, halved the amount of snacks they ate and became much more confident about their cooking skills, the nutritionists found.

“These positive changes emerged immediately following the course and had increased further by six months after the course,” said researcher Janet Cade, Professor of Nutritional Epidemiology at the University’s School of Food Science and Nutrition.
“This suggests that the MoF programme may encourage short-term changes in dietary behaviour which can be maintained and improve over longer periods of time.
“When we analysed the results by sex we found that men – who previous studies have shown tend to have less confidence in cooking than women - actually reported a greater growth in confidence than the women who took part.”
Mr Oliver launched his MoF courses in 2008, stating that he wanted to inspire the nation to prepare tasty, nutritious food, whatever their budget, and described the initiative as the most important campaign he had ever worked on.
There are now four standalone MoF centres in the UK, in addition to outreach courses in the community, as well as allied projects in Australia and the U.S.
For the University of Leeds study, which was published in the journal Public Health Nutrition, the researchers surveyed almost 800 people who took part in MoF courses held in Leeds between 2010 and 2014.

The MoF centre was established in Leeds in 2010. It is a fully fitted domestic kitchen fitted within a stall in Leeds Kirkgate Market. 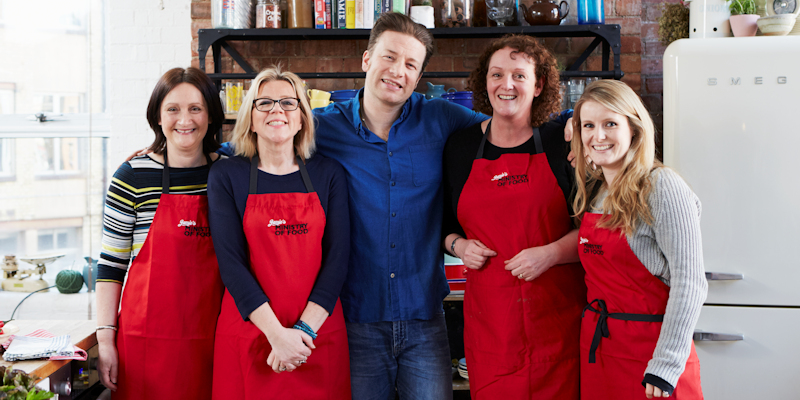 The researchers found that the number of fruit and vegetable portions eaten by the participants increased from 2.7 before the programme to 3.4 immediately afterwards.
When 500 of the participants were surveyed six months later, the average number of fruit and vegetable portions eaten daily had increased even further, to 4.1.
The amount of snacks eaten per day dropped from two before the course to 1.7 immediately afterwards. Six months later this had dropped to 1.1.
The participants also reported significant gains in their levels of cooking confidence, rising from a score of 2.7 on the scale (where 0 was marked as not at all confident and 5 very confident) before the course, to 4.1 immediately afterwards and 4.4 six months later.
Jamie Oliver said: “Ministry of Food, for me, has always been about empowering people and giving them the knowledge and the confidence to feed themselves and their families better.
‘The beauty of it is that it's all about local people helping other local people to create delicious, fresh, nutritious food that doesn't cost a fortune.
“This important study shows that teaching people to cook really works and really does make a huge difference.
“If only more towns and cities had Ministry of Food Centres.”
Professor Cade added: “In the UK there has been a decline in cooking skills since the 1950s.
“Home-made meals have been replaced with ready meals and convenience foods.
“This lack of cooking ability coupled with ready access to high energy convenience foods has contributed to an increase in the number of people who are now overweight.
“Our study shows that if you help people improve their cooking skills using basic ingredients, and their confidence in these skills, then they might make healthier food choices.”
For further information

For media enquiries contact the University of Leeds press office on 0113 343 4031 or pressoffice@leeds.ac.uk