New research suggests that teenagers who had tried an e-cigarette were almost four times more likely to start smoking a conventional cigarette within a year, when compared to classmates who had not.

Vaping – or the use of e-cigarettes – is widely accepted as a safer option for people who are already smoking, but the research, published in the Tobacco Control journal, raises questions about the role e-cigarettes may play in the progression adolescents make to smoke their first cigarette.

It identified a ‘robust association’ between e-cigarette use and the increased probability of smoking a cigarette within year.

The research – involving a collaboration of academics led by the University of Leeds – surveyed 2,836 adolescents from 20 schools in England. Some had tried tobacco but the vast majority were non-smokers. A third had used an e-cigarette.

They were re-surveyed a year later – and asked if they had tried a conventional cigarette, and how often.

Among the adolescents who had never smoked but had tried an e-cigarette, 118 out of 343 reported smoking at least one cigarette (34 per cent) over the year. Among the group who had not smoked and never used an e-cigarette, the figure was 124 out of 1,383.

Lead investigator Professor Mark Conner, an applied social psychologist at the University, said: “The findings suggest that among the teenagers who had never smoked, the use of e-cigarettes was a strong predicator that within 12 months they would have tried a conventional cigarette.

“It is impossible to say if these young people were just experimenting with cigarettes or were becoming more regular smokers.”

The research raises the question of whether or not the adolescents who tried e-cigarettes would have tried smoking anyway, whether e-cigarettes were available or not.

If that was true, the researchers say they would have expected the adolescents at the lowest risk of starting to smoke – those with no friends who smoked – to have shown a weak association between e-cigarette and tobacco use.

Co-author Professor Sarah Grogan, from Manchester Metropolitan University, said: “Adolescents who have used e-cigarettes and who initially have no friends who smoke may be at particular risk of starting to smoke cigarettes.

“This is particularly interesting as it runs contrary to the suggestion that adolescents who try e-cigarettes would have been likely to try smoking anyway due to factors such as peer pressure from friends who smoke.

“Further work is now needed to understand fully the mechanisms behind this effect.” 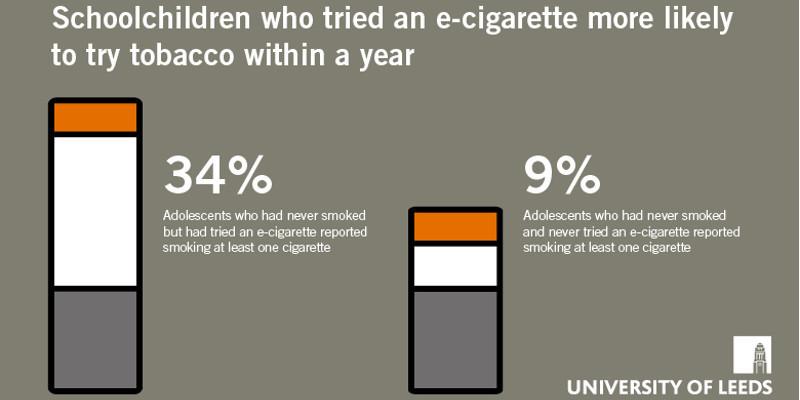 The researchers say it is also plausible that the use of e-cigarettes ‘normalises’ smoking or leads to nicotine addiction – although, as of yet, there is no evidence of that.

It could also be that the use of e-cigarettes creates friendship networks with smokers.

Kamran Siddiqi, Professor in Public Health at the University of York and another co-author, said: “Our study highlights the value of regulating marketing and sale of e-cigarettes to adolescents. The UK has introduced strong regulatory measures in this regard. It is important to enforce these measures effectively and remain vigilant by closely monitoring e-cigarette use in minors."

The survey data was collected as part of an observational study. The limitation of such a study is that it cannot determine cause and effect – instead it highlights possible links between the various factors at play.

However, the paper’s findings are mirrored by similar results from the US where scientists have found that e-cigarette use is associated with cigarette use.

From October 2015, it has been illegal in the UK for retailers to sell e-cigarettes or vaporising liquids to anyone under the age of 18.

The study also noted that a new generation of e-cigarette devices have come onto the market since the study started. The new devices more closely mimic the way cigarettes work and the authors say there is a need for further research to see if they have an impact on young people taking up smoking.

Official statistics show that e-cigarette usage is rising and cigarette usage is declining among young people – a fact Professor Conner said appeared to have some contradiction to the findings of the research project.

He said: “With e-cigarette use being such a recent phenomenon further long term studies are required to determine if e-cigarette use really causes an increase in smoking in adolescents.”

The full research paper Do electronic cigarettes increase cigarette smoking in UK adolescents? Evidence from a 12-month prospective study is published in the Tobacco Control journal.

Professor Conner is available for interview, contact David Lewis in the University of Leeds press office: d.lewis@leeds.ac.uk or 0113 343 8059.