A survey of yogurt ingredients show that sugar levels have significantly decreased in the last two years, but concerns about overall nutritional content remain.

Scientists from the University of Leeds have examined product and nutrient information from 893 yogurts available in UK supermarkets and compared all products to a 2016 baseline survey. Their study, published today in the journal Nutrients, found there was an overall 13% decrease in total sugar content.

Those with the most reduction in sugar were children’s, drinks and fruit yogurts. The number of different children’s and organic products has also decreased since 2016 – 23% and 27% respectively.

“Yogurts can contribute a lot of sugar to children’s diets, so it’s promising that we’ve seen some progress from the sector – but there is still a long way to go.”

The results of this independent survey are in line with the UK Government’s 2019 findings regarding industry progress in reducing sugar.

The data highlights the potential positive effect public policy measures and recommendations such as the SACN Carbohydrates and Health Report – a Public Health England report which included input from University of Leeds researchers – are having on improving the nutrient profile of commonly consumed foods.

But, while the result are promising for the UK’s efforts to tackle obesity and hit sugar reduction targets, the authors also warn that yogurt is still not a straightforward choice for consumers looking for healthy foods.

Lead author Dr Bernadette Moore, associate professor of obesity in the School of Food Science and Nutrition at Leeds said: “Simply put, lowering sugar intake is the best way to prevent obesity and protect our teeth – particularly for small children – so these are encouraging findings and a good insight into current market trends.”

“But recent research has shown a common lack of awareness about how much sugar is in our food. Yogurt in particular has something we refer to as a ‘health halo’, where sugar contents of what are considered ‘healthy foods’ are underestimated.

“Yogurt definitely can have health benefits but ultimately the final nutrient composition depends on the type of milk used and the ingredients added during production, which often include additional sugars and other sweeteners.”

“Yogurt in particular has something we refer to as a ‘health halo’, where sugar contents of what are considered ‘healthy foods’ are underestimated.”

Dr Alison Tedstone, chief nutritionist at Public Health England, said: “Some yogurts can contribute a lot of sugar to children’s diets, so it’s promising that we’ve seen some progress from the sector – but there is still a long way to go.

“The food industry has a responsibility to ensure healthier options are available and that our children aren’t flooded by products full of hidden sugars. We hope to see them step up even more to this challenge.”

Compared to 2016 the number of dairy alternative products has almost doubled and the products surveyed were quite variable in their total sugar contents.

While 37% of dairy alternative yogurts could be considered low sugar – containing less than five grams of sugar per 100 grams – 27% had more than 10 grams of total sugar per 100 grams; and 20% listed sugar as the second most common ingredient after water.

Dr Moore explained: “Dairy alternative and plant-based ‘milks’ have grabbed people’s interest for a number of ethical, and environmental reasons. It’s a trend we see mirrored in the rise of yogurts that use almond and cashew nuts as their base, as well as an increased number of soya and coconut-based yogurts. 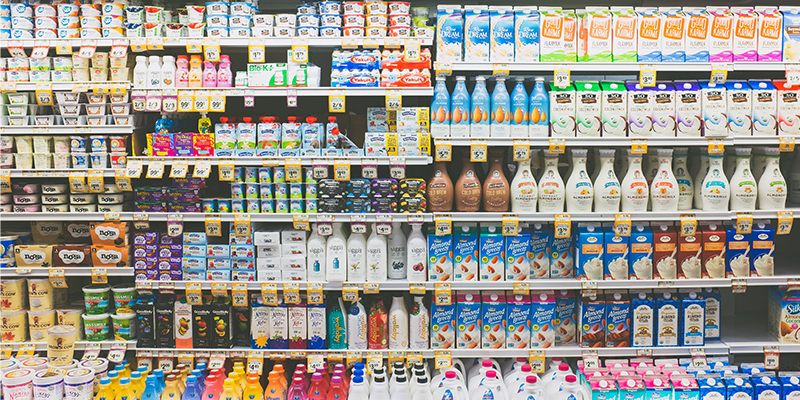 “The question of whether plant-based yogurts provide the same nutritional and health benefits as those made from cow’s milk is currently under investigation.

“Movements such as Veganuary may encourage people to reconsider their eating habits, but it’s important that people are aware that dairy alternatives may be an unrecognised source of added sugar to their diet.”

“Because dairy alternatives do not have lactose, which is a naturally-occurring sugar, the total sugar content comes entirely from added sweeteners. Generally added sugars are considered to be worse for teeth and health.

“Given the wide range of sugar levels across these products, people making a switch to a vegan-friendly yogurt should scrutinise product ingredients carefully.”

Changes in the yogurt market

In general, the study found there has been significant product turnover between the 2016 and 2019 surveys. When pairing matched products by brand and name 40% were considered “new products” as they had not been available in 2016.

32% of the matched products showed reductions in sugar content and 61% showed no changes. The remaining percent showed very small increases in sugar content. This suggests that a significant factor in the overall drop in sugar across all surveyed products was higher sugar products being discontinued.

Study co-author Eiméar H. Sutton, who conducted this research while an undergraduate researcher at the Leeds’ School of Food Science and Nutrition, said: “This survey is a snapshot of the market at a particular time. The extent of market changes between 2016 and 2019 demonstrates that yogurt products and composition is a moving landscape but hopefully this shows we are on the right track.

“Some of the changes were already quite positive. For example yogurts with added cholesterol-lowering plant stanols in 2016 were found to be extremely high in sugar but now we found many were among the top 20 products making the largest reductions in sugar content.

“In many categories the reductions to sugar level were modest and didn't yet meet the 20% reduction target but overall it shows a positive change in the UK’s food industry that may ultimately benefit people’s health.”

The paper ‘Sugar Reduction in Yogurt Products Sold in the UK between 2016 and 2019’ is published in Nutrients on Wednesday 8 January 2020.