The results of a £17 million investment in advanced biological research equipment have been unveiled at the University today, with the official opening of the Astbury BioStructure Laboratory.

Wellcome Director Dr Jeremy Farrar launched the centre, which hosts a 950 MHz nuclear magnetic resonance spectrometer and two 300 kV electron microscopes. These are amongst the most powerful devices of their kind in the world.

Professor Sheena Radford, FMedSci FRS, Director of the Astbury Centre for Structural Molecular Biology, of which the Astbury BioStructure Laboratory is a part, said: “The equipment the University has invested in will create the capability for world-leading biological research here in Leeds, which the city can rightly be proud of. We anticipate it will be sought after by researchers in Europe and beyond and we look forward to sharing our expertise with them.”

Watch a timelapse film of the electron microscopes being installed.

Together with other equipment already in place in the Astbury Centre, the arrival of the new hardware means University of Leeds scientists are now in an enviable position of being able to study bacteria, viruses, and the macromolecules that dictate the life and health of our cells at near atomic level in three different ways.

This will place their research capability on a par with the very best research organisations and universities world-wide.

Professor Radford added: “The combination of these three analysis methods will create a step change in the quality and range of research work we can carry out.

“Ultimately it means we can speed up and improve the process of finding cures for diseases, as well as understanding the fundamentals of life in molecular detail." 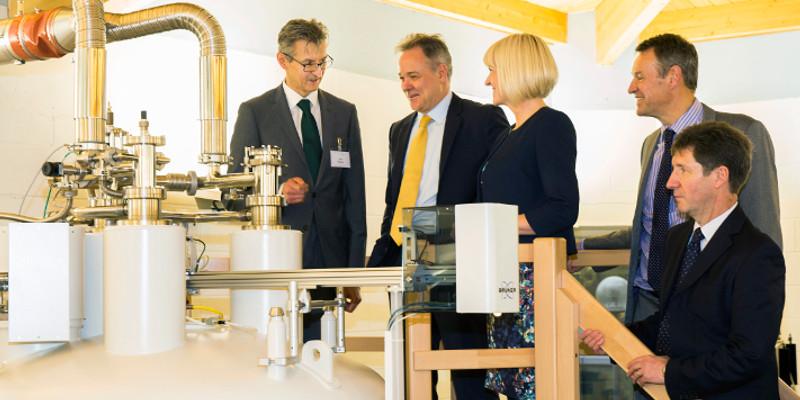 The Astbury BioStructure Laboratory is primarily funded by the University of Leeds from its own budgets, as part of a commitment to tackle the most important global issues of the 21st century. It has also been supported by Wellcome.

After opening the new facility, Dr Farrar said: “There’s no doubt that in the areas Leeds has chosen to focus on, it is world-leading – it’s not just good in Leeds, in Yorkshire, in England – it’s world-leading. The new investment and the new people coming in from all over the world are pushing research to a new level.”

He praised the University’s "bold vision" to invest in NMR and cryo-electron microscopy technology, and said said Leeds was "right at the very frontier of science".

“This is not Leeds playing catch-up, this is the University of Leeds being out in front and playing a world-leading role, and whether that’s in areas of infection, or cancer or diabetes and other diseases, it’s at the forefront of where science is today and where it will be tomorrow.”

As well as creating significant growth in the quality of biological and health science research which academic staff can perform, the new equipment will significantly enhance student education.

PhD and masters students will be able to use the equipment to carry out their own research projects giving them experience in the very latest technology available.

Research work on the new microscope facilities will be led by Professor Neil Ranson, and on the nuclear magnetic resonance equipment by Professor Alex Breeze. The equipment will be accessible to the 70 research investigators in the Astbury Centre, as well as to academic staff in the University of Leeds, in Industry and researchers from across the globe.

Journalists requiring further information or interviews should contact Peter Le Riche in the University of Leeds press office on 0113 343 2049 or email p.leriche@leeds.ac.uk

Wellcome exists to improve health for everyone by helping great ideas to thrive. We’re a global charitable foundation, both politically and financially independent. We support scientists and researchers, take on big problems, fuel imaginations and spark debate.