University of Leeds scientists are looking back in time at previously discarded chemical compounds, to see if any could be developed for new antibiotics.

In the heyday of antibiotic development in the mid-20th century, many different chemical compounds with antibacterial properties were examined, but only a small proportion were selected for development into drugs.

But with modern-day diseases becoming increasingly resistant to those drugs, biological scientists and chemists at Leeds are now re-examining old compounds, applying advances in science and technology to test more precisely whether they could still hold the key to a future medicine.

“Amongst the 3,000 or so antibiotics discovered to date, only a handful have been brought into clinical use. There may be a wealth of compounds out there with untapped potential.”

Dr Alex O’Neill, from the Antimicrobial Research Centre at the University, said: “We’re showing the value of reviewing compounds previously put on the back of the shelf. Amongst the 3,000 or so antibiotics discovered to date, only a handful have been brought into clinical use. There may be a wealth of compounds out there with untapped potential.

“At the moment, the bugs are outsmarting the scientists, and we can’t allow that to continue. By studying compounds which past research has shown already have antibacterial properties, there is scope for a potential fast-track through the challenging early stages of drug discovery. This approach could pave the way for life-saving new drugs.” 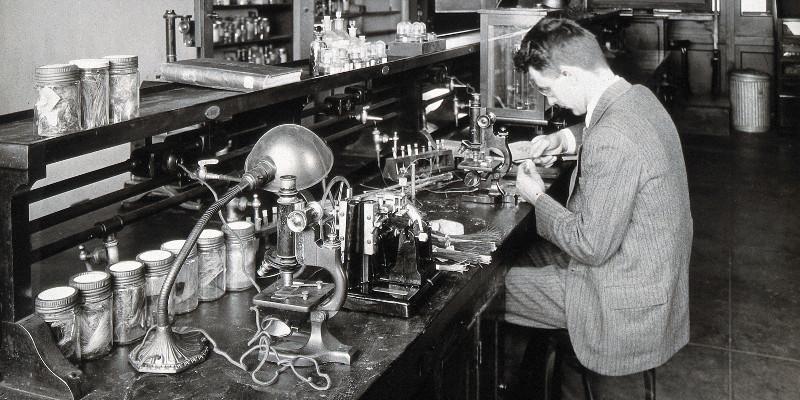 Research techniques such as those used in this laboratory in the 1940s were very different to today, and Dr O'Neill believes modern practices may yield greater results.
(Picture credit: Wellcome Collection)

Dr O’Neill’s latest research found that a compound identified in the 1940s could now be a realistic contender as the basis of a new antibiotic drug.

A family of compounds, known as the actinorhodins, was originally identified as having weak antibiotic properties, but was not taken forward for development into a drug.

However, Dr O’Neill said that at the time scientists did not fully differentiate the individual compounds within the family when they examined them, leading to a less than precise picture of their properties.

This prompted his team to divide the family and select a specific compound (y-ACT) for further evaluation, using an array of 21st century approaches, to assess its potential and to understand how it works against bacteria.

Dr O’Neill and colleague Professor Chris Rayner from the University’s School of Chemistry have published their findings in the journal Scientific Reports, and believe the compound is worth serious consideration as the basis for a new drug to combat certain types of bacterial infections.

Dr O’Neill added: “y-ACT exhibits potent antibacterial activity against two important representatives of the ESKAPE* class of pathogens, which are bacteria that have developed the ability to ‘escape’ the action of existing drugs.

“Dr O’Neill’s research is important: it’s providing another way of looking for potential antibiotics and could hold the key to uncovering options that were overlooked before but may be incredibly useful now.”

"A major challenge in tackling the problem of antibiotic resistance is to discover new drugs – our study shows that potentially useful drug candidates can be ‘discovered’ from amongst the antibiotics we already know about.

“The weak activity previously published for the ACT family as a whole probably explains why this group was not further evaluated, and it is intriguing to think that other potentially useful antibiotic groups are languishing in obscurity in academic journals just needing expert review using modern processes and equipment.”

Supporting Dr O’Neill’s work, Dr Jonathan Pearce, Head of Infections and Immunity at the Medical Research Council, said: “There is an urgent need to discover new ways to fight AMR and the scientific community is leaving no stone unturned in its search for new antibiotics. This includes revisiting chemical compounds that were once shelved.

“Until recently, no new antibiotics had been discovered for 25 years. Dr O’Neill’s research is important: it’s providing another way of looking for potential antibiotics and could hold the key to uncovering options that were overlooked before but may be incredibly useful now.”

Also based in Leeds' School of Chemistry is Dr Michael Webb, whose research focuses on a compound, called pentyl pantothenamide, first assessed in the 1970s.

Then, it was found to be able to stop the growth of E.coli but not completely kill the bacteria, so was never taken into clinical use.

At the time, scientists did not understand how it was able to stop the growth, but Dr Webb and his team have proved it is driven by Vitamin B5, which is used to metabolise energy. Bacteria have to make B5 and a key part of the machinery they use to do so is called the PanDZ complex.

Pentyl pantothenamide targets the PanDZ complex, preventing E. coli from making Vitamin B5 and so starving it of the means to grow.

Dr Webb said: “The results of our latest studyopen up the possibility of designing new drugs that use the same means to attack E. coli, but in a more effective way.”

Dr O’Neill concludes: “Our findings underscore the importance of revisiting unexploited antibiotics as a potential source of new antibiotic drug candidates. We now believe a comprehensive re-evaluation of such compounds is worthwhile, potentially offering new ways to protect against infections.”

Dr O’Neill’s study, Revisiting unexploited antibiotics in search of new antibacterial drug candidates: the case of y-actinorhodin, is published in the journal Scientific Reports. It was funded by the Medical Research Council, and members of the research team were supported by the Saudi Arabian Government, King Abdulaziz University and the Engineering and Physical Sciences Research Council.

Dr Webb’s study, Mechanism of regulation of pantothenate biosynthesis by the PanD-PanZ.AcCoA complex reveals an additional mode of action for the antimetabolite N-pentyl pantothenamide (N5-Pan) is published in Biochemistry. It was funded by Wellcome, and team members were supported by the University of Leeds, University of Hamburg and The German Federal Excellence Cluster.