Scientists have developed a new way to see inside individual cells, and study how they move and operate inside the human body.

The improved understanding of cell-level activity could give researchers extra insight and tools to tackle cancers and other diseases.

The University of Leeds team is using a lab-made protein called an Affimer that binds to the F-actin protein.

F-actin is part of the network within cells which gives them their shape and helps them move and divide.

By seeing the cells move and change, scientists can begin to develop chemical compounds to target them, over time becoming new drug candidates.

Affimers were first developed at the University of Leeds and are a man-made alternative to animal-derived antibodies. This has the important extra benefit of reducing the numbers of animals used in research work.

This latest type of Affimer technology which recognises the F-actin protein is an important step forward in giving scientists the tools to combat diseases. Details are published in the Scientific Reports journal.

Ruth Hughes, a Research Fellow at the University, who co-led led the research said: “The new use for the Affimers we’ve isolated has created a version which recognises and binds to the F-actin protein, which forms part of a dense ‘wiring system’ of filaments within cells, to give them their structure and assists with their movement and division.

“The Affimers carry a biological label which lights up under a microscope to help us see the F-actin with greater accuracy than previously possible with antibodies.” 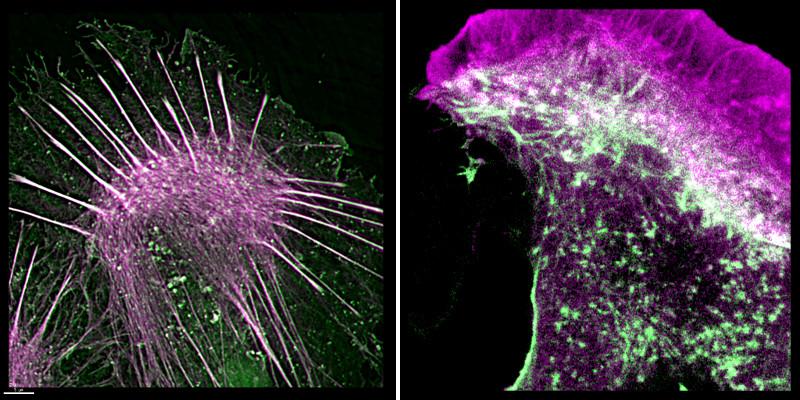 The above images show the purple stained actin within cells, and the green coloured affimer which has bound to it. The addition of the affimer to the actin inside the cell makes it much easier for scientists to study the cell’s behaviour.

In addition to the better view, the small size of the Affimers has made it possible to bind right into the dense actin network in living cells, enabling scientists to watch movement within the cell.

Michelle Peckham, Professor of Cell Biology at the University's Astbury Centre for Structural Molecular Biology has been involved in newly-published research explaining the advance. Professor Peckham said: “These Affimers provide a new tool for live cell imaging and reducing the use of animals in research.

“Being able to see the F-actin in motion could enable proteins which bind to the actin and regulate its movement to be studied in greater depth; these interactions have been linked to a wide range of diseases including cancer, neurological disorders and cardiomyopathies.”

Further development of the Affimers could prove useful in diagnostic assays, as well as a wide range of research areas including cancer and heart disease, the researchers say.

The characterisation of the Affimers that recognise F-actin was carried out at the University’s super-resolution microscopes in its Bioimaging Facility, which is available to academics outside the University and to business and industry, via the University’s new innovation centre, Nexus.

For years scientists around the world have exploited the ability of antibodies to recognise specific proteins in a wide range of techniques including diagnostic screening and in studying different tissues and cells under microscopes.

Whilst antibodies are a good tool to recognise specific proteins, they are comparatively large, which makes them less flexible to use within the body.

Scientists at the University of Leeds first developed Affimers in 2014 and explained them in detail in a paper published in the eLife journal in June last year. They can be isolated to specifically recognise proteins of interest but are smaller than antibodies and do not require animals for their production. Affimer technology was highly commended in the National Council for Replacement, Refinement and Reduction of Animals in Research’s 2017 awards.

Their use fulfils a key commitment which the University and many other institutions have made – to reduce the numbers of animals used in research. The University is a founding signatory to the Understanding Animal Research Concordat on Openness in Animal Research.

The top picture shows a computer simulation of the Affimer which can identify the F-actin protein within cells.

Researchers on the project were funded by Wellcome.

Journalists with questions or interview requests should contact Peter Le Riche in the University of Leeds press office on 0113 343 2049 or p.leriche@leeds.ac.uk