The timing and size of three deadly earthquakes that struck Italy in 2016 may have been pre-determined, according to new research that could improve earthquake forecasting.

A joint British-Italian research team, including geologist Dr Laura Gregory from the University of Leeds, has shown that the clustering of the three quakes might have been caused by the arrangement of a cross-cutting network of underground faults.

The findings show that although all three earthquakes took place on the same major fault, several smaller faults prevented a single massive earthquake occurring. The faults also acted as pathways for naturally-occurring water and gas that triggered later earthquakes.

The cluster of three earthquakes, termed a “seismic sequence” by seismologists, were each over a magnitude of six and killed more than 300 people in Italy’s Apennine mountains between 24 August and 30 October 2016.

The team’s research, published in the journal Earth and Planetary Science Letters could have wider implications for the study of earthquake sequences and the hazards associated with potential earthquakes in a particular areas, such as landslides and subsidence – referred to by scientists as seismic hazards.

Dr Gregory, from the School of Earth and Environment at Leeds, said: “A seismic sequence has vastly different implications for seismic hazards compared to a single large earthquake. If the faults in Italy in 2016 had failed together in one big event, the impact on the local population would have been much worse.

“Our results could help geologists and seismologists understand why a major fault system ruptures in a single large earthquake, such as the massive 1906 San Francisco earthquake, as opposed to resulting in multiple smaller earthquakes drawn-out over months or years.

"Understanding the arrangement of the faults could also help predict what could happen once the seismic sequence began.” 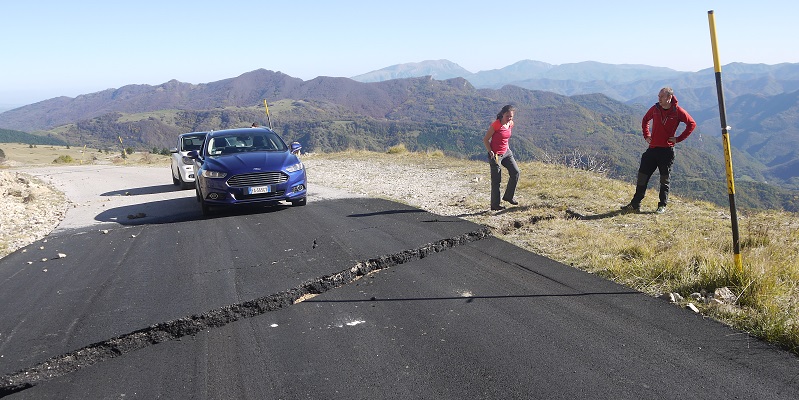 Location of survey site at rupture across a road near Castelluccio. The rupture occurred during the third earthquake in the seismic sequence and gives researchers a record of the deformation.

The team used satellite data to estimate which part of the fault failed in each earthquake, and compared this pattern with the location and timing of thousands of tiny aftershocks throughout the seismic sequence.

They found that intersections of small faults with the main fault system separated each of the three largest earthquakes, strongly suggesting these intersections stop the growth of each earthquake and prevent the faults failing in a single large event.

The team also found that after the first earthquake, thousands of aftershocks crept northwards along these same fault intersections at a rate of about 100 metres per day, in a manner consistent with naturally-occurring water and gas being pumped along the faults by the first earthquake on 24 August, 2016.

The second earthquake, on 26 October, occurred exactly when these fluids reached its location, therefore controlling the relative timing of failure.

Study lead author Dr Richard Walters, from the University of Durham, said: “It was a big surprise that these relatively small faults were having such a huge influence over the whole sequence.

“They halted the first earthquake, and then they channel the fluids that start the sequence up again months later.

“This is all information we could hypothetically know before the event, and therefore, this could be a hugely important avenue for improving future earthquake forecasts.”

Dr Gregory said: “This is the first time we’ve had this quality of modern data over one of these earthquake sequences, and bringing together a range of specialists was key for unpicking how the earthquakes related to one another.

“After each earthquake my colleagues and I measured the metre-high cliffs that had formed, while colleagues were analysing data from seismometers around the world and mapping the tiny bending of the ground around the faults using satellites.

“Combining this wide range of datasets allowed us to better understand the 2016 seismic sequence. Hopefully it will also feed into improved future earthquake forecasting for the region and advice for local authorites on how to respond in the event of a seismic sequence.” 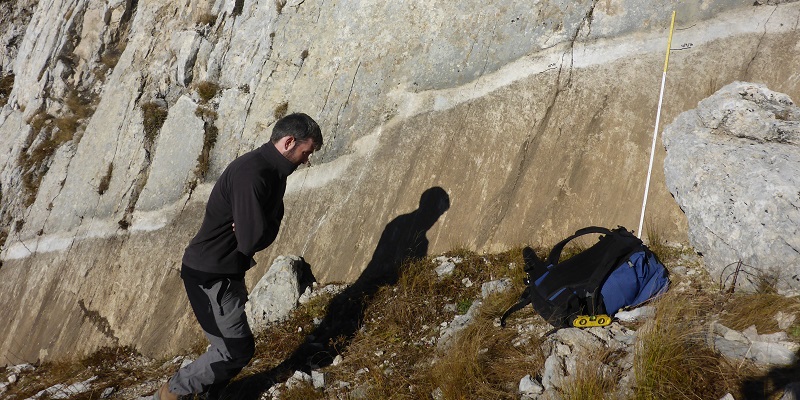 The paper Dual control of fault intersections on stop-start rupture in the 2016 Central Italy seismic sequence, is published in Earth and Planetary Science Letters