The dazzling floral displays of early spring are starting to draw to a close. But wily gardeners know that they can keep plants in flower for longer by removing fruit and seeds as soon as they form.

It is all to do with a chemical messenger called auxin which is produced in copious amounts by fruits and seeds.

Although biologists have a good idea of the environmental cues that trigger the start of flowering, understanding how and why plants stop flowering has been much less clear.

Now, collaborative research between the University of Leeds and University of Nottingham has identified that auxin, a phytohormone involved in many aspects of plant growth, plays a key role in bringing flowering to an end.

“...by better managing when and for how long plants remain in flower, we can improve crop yields.”

The findings have been published in the journal Nature Plants.

Crucially, the researchers also showed that the auxin produced by the fruits is the signal that stops the plant producing more flowers.

While their research focused on one particular plant, they believe the findings will be widely applicable to other plant species including oilseed rape, a commercially important crop. 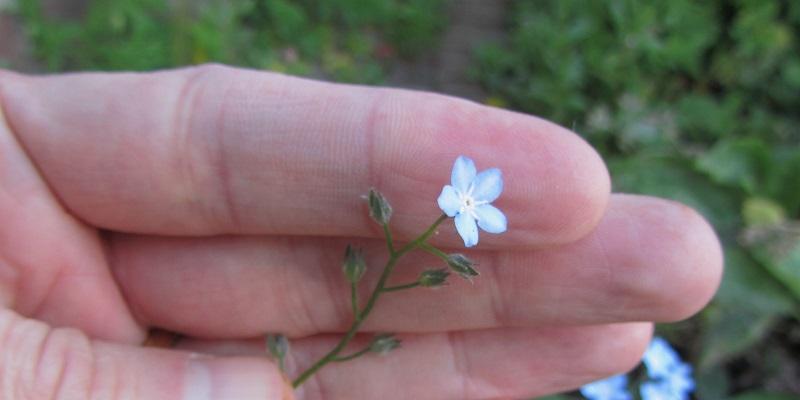 The last flower to open on a forget-me-not

Dr Tom Bennett, University Academic Fellow in the Faculty of Biological Sciences at the University of Leeds, supervised the research. He said their hypothesis is that the high levels of auxin produced in the fruit block the production of auxin in new flowers, preventing the buds from forming and opening.

He said: “We now know plants will remain in flower until they have high enough auxin levels from fruit and seeds to shut down flowering. This is biologically significant because it allows the plant to concentrate its energy resources on developing fruit and seeds, rather than making more flowers.”

“However, this is a complex process and although auxin effectively switches off flowering, there are other regulators at play in the plant that stop this happening too soon.”

And of course, it is a process that has been exploited by wily gardeners who noticed that by quickly harvesting the fruit, they can keep their plants in flower. They are removing the source of the auxin surge that leads to the end of flowering.

Dr Bennett said: “We already know a lot about auxin. This research presents the possibility that by better managing when and for how long plants remain in flower, we can improve crop yields.”