The photographs show the important role the parks have played in city life. There are unseen images of a zoo that existed at Roundhay Park in the 1920s.

Other photos reveal the way green spaces were used for the Dig for Victory campaign during the Second World War to provide food for a nation living with effects of severe rationing.

The collection has been produced by researchers at the University of Leeds, with more than 100 photographs donated by the public and Leeds City Council. It will be showcased at the Roundhay Park Visitors’ Centre, next to The Mansion, from 29 April to 7 May.

During the May Day bank holiday weekend, there will be additional activities taking place to celebrate the city’s parks. At 2pm on Saturday and Sunday, there will be guided walks around Rounday Park describing its history. At 1pm on Bank Holiday Monday, there will be a talk at the visitors’ centre about the history of Leeds’ parks.

The images will also be digitised into the Leodis database – a collection of more than 59,000 photographs held by Leeds Library and Information Service chronicling the growth of the city from the 1890s. 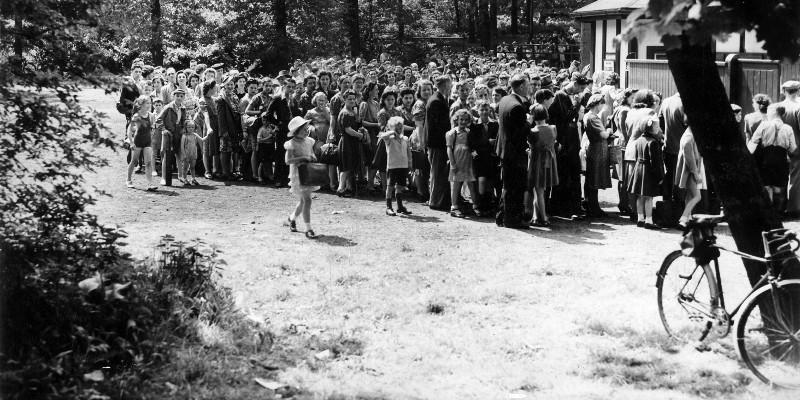 The queue for the now-closed swimming pool at Roundhay Park in 1944.
Picture: Leeds Parks and Countryside.

Leeds parks were created in the Victorian period – to provide space where people could relax and socialise at a time when the city was experiencing rapid industrialisation.

Among the photographic treasures to come to light is a scrapbook kept by Thomas Trigg, head of the Parks Department during the mid-1900s. It shows Roundhay Park on a warm Whit Bank Holiday in May 1944.

Families are seen picnicking around the boating lake, queuing to get into the long-gone swimming pool – and watching a cricket match.

The collection arises from the University’s The Future Prospects of Urban Parks project, which investigates the origins and future prospects of public parks in Leeds.

The exhibition documents the story of Leeds parks – past, present and future. It reveals why parks were first created, how they are used and valued today, and how they might evolve over the coming decades. Further information about the exhibition is available from the project website.

Dr David Churchill, part of the University of Leeds research team, said the photographs provided a rich historical record of park life in Leeds: “The photos underline the important role that parks have played in the life of this city since the Victorian era when many of them came into being. 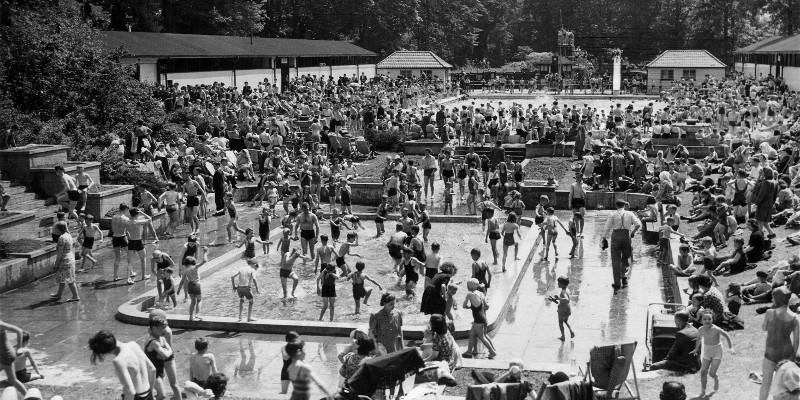 The busy pool at Roundhay Park in 1944.
Picture: Leeds Parks and Countryside.

“The creation of parks allowed people to escape from the rapidly growing city, to get out and enjoy themselves. There’s little doubt they’ve had a major impact on people’s health and recreational lives.

“But parks are now at a tipping point. They have enjoyed a renaissance in recent decades but there are real challenges ahead. Council budgets everywhere are under pressure and parks are having to respond to that.

“The photographs we’ve received show they are the jewels of the city – and our research with park users reveals that many people are anxious for them to remain as the treasured social assets they are.”

Rose Gibson, manager of Leeds Central Library, said: “Discovering these new photographs of Leeds parks has offered a fascinating insight into how the people of Leeds have enjoyed using the parks over the years.

“The scrapbook, started by Thomas Trigg, reveals previously unseen images of Roundhay Park zoo in 1923, the Dig for Victory exhibition in 1943 and people relaxing in the park after the end of the war amongst other treasures.

“The project has also encouraged individuals to share their own images and stories and again shows the importance of the parks in family events and sporting achievements.” 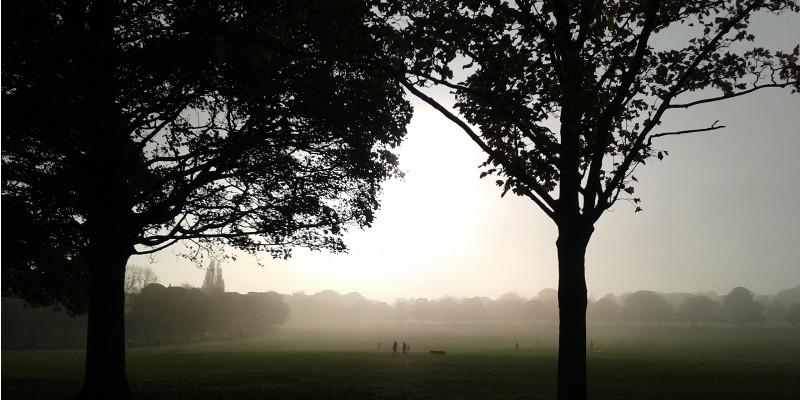 An early morning view over Roundhay Park in 2017

As part of the research project, a public survey revealed which parks in Leeds are most popular. The clear winner was Roundhay Park – with almost two out of three people saying they had visited it in the last year. Golden Acre Park and Temple Newsam took second and third spots.

“This new photographic archive by the University of Leeds offers a fascinating opportunity to see how people from the Victorian period onwards have embraced and enjoyed our wonderful parks and green spaces in Leeds.

“We are of course immensely proud of our green spaces and delighted to see through the results of a survey undertaken as part of this project, that our parks remain a popular place for the public to visit.”

Journalists with queries can contact David Lewis in the University of Leeds press office on 0113 343 8059 or email d.lewis@leeds.ac.uk