The research outlines the motivations and strategies of a well organised and funded hierarchy of political operators, who maintain day jobs as advertising and public relations executives, computer programmers and political administrative staff.

The report, Architects of Networked Disinformation: Behind the Scenes of Troll Accounts and Fake News Production in the Philippines, is based on a year-long research project.

Led by Dr Jason Cabañes from the School of Media and Communication and Dr Jonathan Corpus Ong from the University of Massachusetts Amherst, the project involved in-depth interviews with disinformation architects and online observation of the fake accounts they operated.

“We were initially curious about the kind of people who become ‘paid trolls’ and how they manage to live with that stigma.”

“We were initially curious about the kind of people who become ‘paid trolls’ and how they manage to live with that stigma,” said Dr Ong. “Meeting the people behind fake Facebook accounts, we learned that there is actually a professionalised hierarchy with ad and PR strategists at the top.”

Dr Cabañes, a lecturer in International Communication, added: “We also met the anonymous digital influencers and fake account operators in the middle and lower rungs of the hierarchy. We got to know how financial insecurity and career aspirations drove many of them to get into disinformation work.” 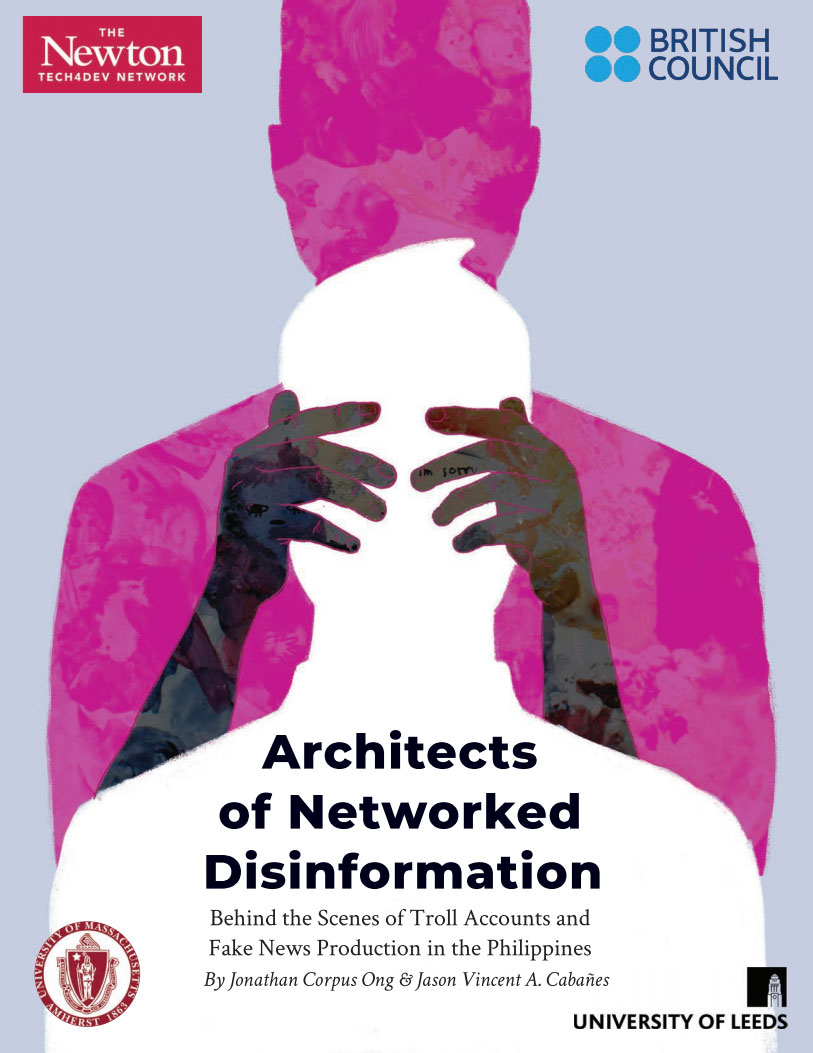 The study explains how strategists set campaign objectives based on input from their political clients, then delegate political marketing responsibility to a team of digital influencers and fake account operators.

While the Philippine public’s moral panic about fake news is often directed at high-profile digital influencers and celebrities who are seen to incite political divisiveness and harass journalists, Dr Ong and Dr Cabañes argue the architects of disinformation are hiding in plain sight – wearing respectable faces as leaders in their industry while sidestepping accountability.

“Our aim is not to name and shame individual workers, but to expose the system that has professionalised the organisational workflow and salary incentive schemes of ‘paid trolls’ and fake news authors,” Dr Ong added.

Election funding legislation and gaps in self-regulation of the advertising and PR industries allow digital campaigns to remain unchecked, and for PR and ad executives to take on ethically dubious freelance work without fear of being held accountable, the researchers say.

“Countries need to understand the hierarchies and financial incentives that reward these ‘paid trolls’.”

Dr Cabañes said: “There’s no one-size-fits-all solution to disinformation. Countries need to understand the hierarchies and financial incentives that reward these ‘paid trolls’.

"Simply blocking accounts or blacklisting fake news sites – while often well-meaning – does not treat the underlying causes of the problem.”

The report proposes policy-driven solutions to industry, government and civil stakeholders and calls for new collective interventions to the systematic production of disinformation.

These recommendations include self-regulation measures in the digital influencer industry and legal reforms for election finance transparency.

Drawing attention to the country’s highly skilled, highly organised online freelance labour force – described as “a stockpile of digital weapons” – the research challenges global actors to look beyond the West and consider how fake news production in countries such as the Philippines, currently the outsourcing capital of the world and previously the focus of attention for “digital sweatshops”, might have far-reaching implications for digital disinformation in democratic countries such as the UK and US, and vice versa.

The report, which was released at this week’s Democracy and Disinformation Conference at Ateneo de Manila University in Quezon City, Philippines. It was funded by a British Council Newton Fund grant.

For interviews, contact Gareth Dant, Media Relations Manager in the University of Leeds press office, on 0113 343 3996 or g.j.dant@leeds.ac.uk or in the US: Jonathan Corpus Ong, jcong@umass.edu or Jared Sharpe, jsharpe@admin.umass.edu