A new generation of ultra-sensitive detectors has opened up the use of infrared wavelengths for a large number of new applications that could improve people’s lives, according to researchers.

From uses in autonomous vehicles and communications to civil protection and environmental monitoring, the ability to measure the infrared spectrum more conveniently and in much greater detail than is currently possible is a major step forward.

This is according to the team who developed the detectors, which includes senior academics from Leeds, working with colleagues at ETH Zurich in a project led by the University Paris Diderot.

Infrared light is invisible to the naked eye and can only be measured with the help of a detector. Although it is emitted by any object at room temperature, it is rarely exploited fully by scientists. This is because of a lack of functional detectors which can operate at room temperature, sufficiently quickly, and with enough sensitivity.

Now though, the research team has built and demonstrated a new technique that amplifies the performance of infrared detectors. They have used nano-fabrication techniques to develop quantum structures which can operate in a useful way.

Professor Edmund Linfield, Chair of Terahertz Electronics at the University of Leeds, said: “The applications of infrared radiation are potentially very numerous. This new technology we’ve developed with our international colleagues could quickly find applications in telecommunications or for the remote detection of pollutants.

“The key has been the successful development of a fast detector that is operational at room temperature, and which can reduce the effects of what is known as ‘dark current’, an unwanted process that competes with the signal that you are trying to measure.”

In these new detectors, the incident radiation is taken from a very large surface and heavily concentrated before it generates an electrical signal.

This is possible thanks to a photonic structure within the detector itself that acts as a funnel. The detector is made up of active elements of one micrometre square, whose area is 10 times smaller than the surface from where the photons are captured.

“This new technology we’ve developed with our international colleagues could quickly find applications in telecommunications or for the remote detection of pollutants.”

Reducing the active volume in which photons are transformed into electric current is essential to limit the contribution of the intrinsic unwanted current that flows even in the absence of light, called the dark current.

The active region of the detector, a stack of semiconductor layers, which were grown to atomic layer precision at the University of Leeds, is inserted between two layers of gold, the top of the device and the plane on which it is placed.

These two metal layers then form part of a resonator that traps the infrared radiation so it can be measured by converting the infrared photons into electric photo-current.

In existing detectors, the dark current can be so large that it completely masks the photo-current and requires the use of expensive cryogenic cooling to try to reduce the problem, which also adds considerable size and mass. The new detectors show excellent performance at room temperature.

In addition, the high speed of response of these new detectors makes it possible to achieve ultra-sensitive detection levels, similar to that developed for radio waves. This is achieved by mixing the signal to be detected with a reference signal. 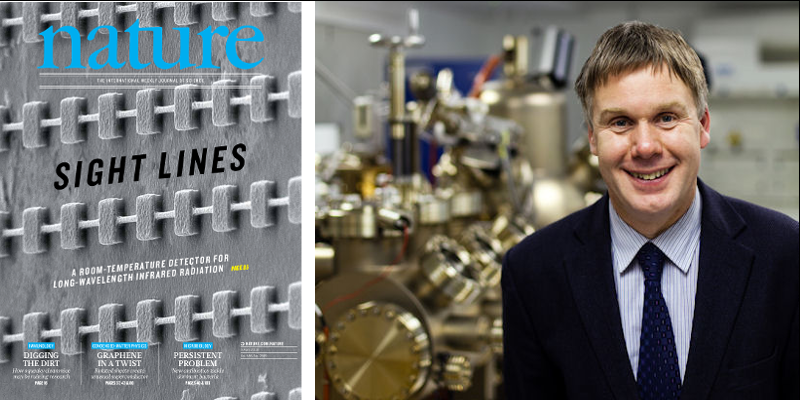 Professor Linfield, right, and the cover of the Nature journal featuring the research.

The research programme is explained in the latest edition of the journal Nature, which has featured the work on its front cover, in recognition of its significance.

Research programmes such as this are a prime example of the type of collaborative projects which will be delivered through the University’s Bragg Centre for Materials Research.

The centre will be based in the forthcoming £96million Sir William Henry Bragg Building, which is due to open on the University campus in Autumn 2020; the Centre will also act as the focus for Leeds’ activities within the Henry Royce Institute – the UK’s National Institute for Materials Science Research and Innovation, of which Leeds is a founding partner.

Journalists with questions or interview requests should contact Peter Le Riche in the University of Leeds press office on +44 (0)113 343 2049 or email p.leriche@leeds.ac.uk

This research project was funded by the European Commission, the French National Research Agency and the UK Engineering and Physical Sciences Research Council, part of UK Research and Innovation.