The World Triathlon Leeds (11 and 12 June) attracted thousands of spectators across the city, watching both amateurs and the professionals in action, and provided the perfect opportunity for fans to celebrate the city's success in the sport.

With Alistair claiming the win ahead of second-place Jonny in the men's race, Leeds-based Vicky Holland finished third in a sprint finish in the women's contest.

The event followed the news last week that five of the six athletes selected for Great Britain’s Olympic team train at the Leeds Triathlon Centre. A collaboration between the University of Leeds, British Triathlon, and Leeds Beckett University, it offers elite training for top triathletes.

“The investment the University of Leeds has made over the last five years has placed us at the forefront of world triathlon, in terms of training facilities and coaching as well as the opportunities for our students to study.”

Alistair, Jonny and Gordon continue to make regular use of training facilities at the University’s sporting facilities, including The Edge swimming pool, which Alistair Brownlee described as ‘a fantastic pool and a great facility’.

The trio have been congratulated on their selection by the University’s Head of Alumni Engagement, Phil Steel. He said: “It’s a real sign of their dedication that Jonny, Ali and Gordon developed into elite athletes while still completing very demanding degree courses.

We’re immensely proud of them and I’m glad the University was able to tailor the academic requirements of their degree courses to create time for them to develop into the top class athletes they are today.

Their selection to the Olympic team should inspire our current students to know the University will support them to achieve their goals.” 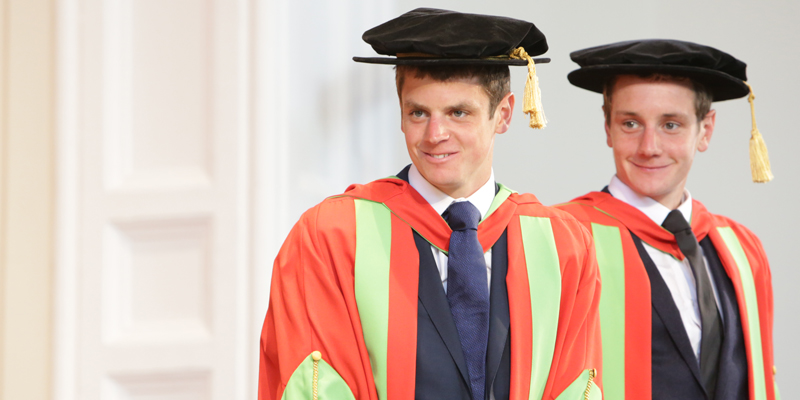 Both the Brownlee brothers, who were also awarded honorary doctor of laws degrees from Leeds in 2013, have credited the University in helping them develop their performance.

The pair have also launched the Brownlee Foundation, which the University has partnered with to support the development of triathlon and student triathletes. This agreement includes a scholarship, for a talented student athlete to be supported academically and financially to help them pursue a career in sport.

Speaking when the scholarship was launched, Alistair Brownlee said: “We both really appreciated how the University of Leeds supported us during our time here, enabling us to juggle our education and training commitments, so we were able to enjoy the best of both worlds.”

Johnny Brownlee has also explained how the University’s support made a significant difference: “Both of us received scholarships from the University. I was allowed take my exams all over the world when I was qualifying for the Olympics and I could split my final year in two, which meant I could concentrate on training as a full time athlete.

"We trained at The Edge at least twice a week. The fact that the pool and gym were on site when we were studying made it so much easier to fit training in.” 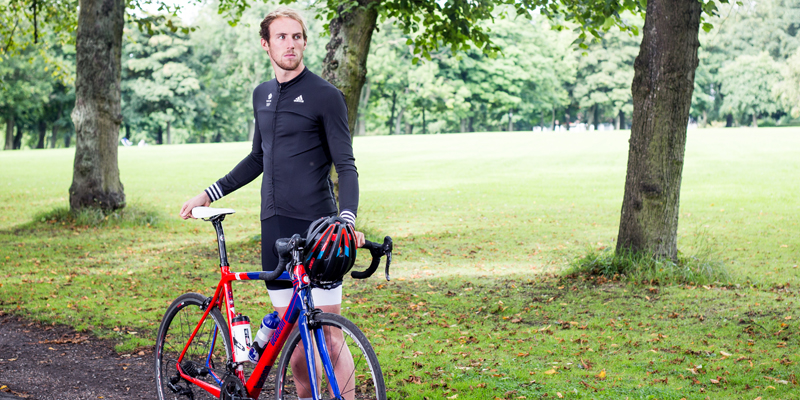 Gordon Benson, the third member of the team, is currently reading for a BSc in Nutrition, and also credits the University with helping him succeed: “My mind and heart were set on Leeds so I enrolled on nutrition, and from the first couple of weeks I thought ‘Yeah, I’m into this’. I’ve been fortunate to have a lot of support from the Uni. It’s almost a welcome distraction sometimes."

The women's Team GB triathlon squad sees two of the three competitors being part of the Leeds Triathlon Centre's elite training programme. Non Stanford and Vicky Holland both plough through hundreds of lengths each week at The Edge pool to remain in peak condition as well as using the other top quality facilities and services which form part of the centre.

Non Stanford and Vicky Holland with Helen Jenkins, the last member of the women's trio, and the men's team at the official announcement of the Team GB squad.

The Leeds Triathlon Centre is widely regarded as the leading triathlon programme in the world, and Stewart Ross, Leeds' Director of Commercial and Campus Support Services believes the quality of its coaching is the reason why so many of the athletes who regularly train there have secured Team GB places.

The centre currently supports around 90 athletes in their aspirations to become the best in the world, 14 of which are part of an elite training squad. Between 2009 and 2015, athletes from Leeds won 23 medals in Olympic, Commonwealth and ITU World Triathlon grand finals.

In addition to supporting individual students with potential to reach the pinnacle of their sport, the University of Leeds’ academic staff also carry out research into the effects on triathlon competition on elite athletes.

Dr Neil Messenger from the School of Biomedical Sciences in the Faculty of Biological Sciences has conducted extensive research into overuse injuries caused by physical activity in sport and exercise, and how in some cases these can result in the complete withdrawal of an athlete from their sport.

Read an interview with Gordon Benson in the University's Alumni Magazine here.