University of Leeds graduates claimed three gold medals and one silver in the Rio 2016 Paralympic Games, with one helping set a new world record in the process.

Swimmer Claire Cashmore, who completed her degree in Linguistics and Phonetics in 2011 claimed gold as part of the TeamGB women’s 4x100m medley relay in a world record time of 4.45.23.

The medal is Claire’s first gold of her career, she also secured a silver medal three days earlier in the women’s 100m breaststroke.

The Leeds’ cohort’s second gold medal was secured by Grace Clough who graduated in 2013 with a degree in Sociology. Rower Grace was part of the mixed coxed fours team which beat the USA and Canada to claim the top position.

The third gold for a University of Leeds graduate Paralympian was claimed by hand cyclist Karen Darke, who beat the USA and Italy into silver and bronze positions.

Karen secured the medal in the women’s time trial with an average speed of 35.5km/h.

She graduated in 1992 with a degree in Chemistry and Geological Sciences also competed in the women’s road race but did not finish.

With the Paralympics now at an end, the University’s Vice Chancellor, Sir Alan Langlands congratulated the medal winners.

He said: “Our graduates who took part in the Paralympics and those who won medals have proved they can compete at the very highest levels. They are an inspiration to us all and I congratulate them on their success.

“The University provides dedicated support to elite athletes and we will continue to do all that we can to help all athletes achieve their potential.”

Leeds’ two other Paralympians also performed well, but missed out on medal placements.

Laura completed a Sports and Exercise Science degree in 2012 and also came fifth in the women’s T43-44 200m final.

Suzanne Glavin, the University’s Head of Sport congratulated both Kim and Laura on their achievements and said the University was proud of all competitors. 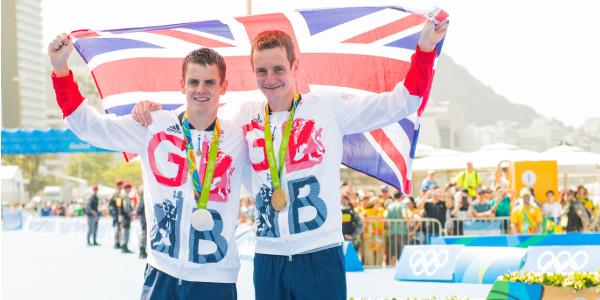 The Paralympians’ medal success adds to the Leeds contingent who took part in the Olympic Games in August.

Across both tournaments, graduates from the University performing with TeamGB claimed four golds and two silver medals.

In the Olympics, brothers Alistair and Jonny Brownlee claimed gold and silver in the men’s triathlon, where Gordon Benson, a 2016 Nutrition graduate, also competed in his debut games.

Alistair Brownlee studied Physiology and Sport and graduated in 2009, while Jonny completed a degree in History at the University in 2012.

Diver Rebecca Gallantree a 2005 BSc in Sport and Exercise Science graduate competed in both the individual 3m springboard and the synchronised 3m springboard dive, where she came sixth with team mate Alicia Bragg.

Picture above are Alistair and Jonny Brownlee are received their medals at the Olympic Games.