Stimulating nerves in your ear could improve the health of your heart, researchers have discovered.

A team at the University of Leeds used a standard TENS machine like those designed to relieve labour pains to apply electrical pulses to the tragus, the small raised flap at the front of the ear immediately in front of the ear canal.

The stimulation changed the influence of the nervous system on the heart by reducing the nervous signals that can drive failing hearts too hard.

Professor Jim Deuchars, Professor of Systems Neuroscience in the University of Leeds’ Faculty of Biological Sciences, said: “You feel a bit of a tickling sensation in your ear when the TENS machine is on, but it is painless. It is early days—so far we have been testing this on healthy subjects—but we think it does have potential to improve the health of the heart and might even become part of the treatment for heart failure.”

The researchers applied electrodes to the ears of 34 healthy people and switched on the TENS (Transcutaneous electrical nerve stimulation) machines for 15-minute sessions. They monitored the variability of subjects’ heartbeats and the activity of the part of the nervous system that drives the heart. Monitoring continued for 15 minutes after the TENS machine was switched off.

Lead researcher Dr Jennifer Clancy, of the University of Leeds’ School of Biomedical Sciences, said:  “The first positive effect we observed was increased variability in subjects’ heartbeats. A healthy heart does not beat like a metronome. It is continually interacting with its environment—getting a little bit faster or a bit slower depending on the demands on it. An unhealthy heart is more like a machine constantly banging out the same beat. We found that when you stimulate this nerve you get about a 20% increase in heart rate variability.”

Dr Clancy said: “We measured the nerve activity directly and found that it reduced by about 50% when we stimulated the ear. This is important because if you have heart disease or heart failure, you tend to have increased sympathetic activity. This drives your heart to work hard, constricts your arteries and causes damage. A lot of treatments for heart failure try to stop that sympathetic activity—beta-blockers, for instance, block the action of the hormones that implement these signals. Using the TENS, we saw a reduction of the nervous activity itself.”

The researchers found significant residual effects, with neither heart rate variability or sympathetic nerve activity returning to the baseline 15 minutes after the TENS machine had been switched off.

The technique works by stimulating a major nerve called the vagus, which has an important role in regulating vital organs such as the heart. There is a sensory branch of the vagus in the outer ear and, by sending electrical current down the nerves and into the brain, researchers were able to influence outflows from the brain that regulate the heart. Vagal nerve stimulation has previously been used to treat conditions including epilepsy. 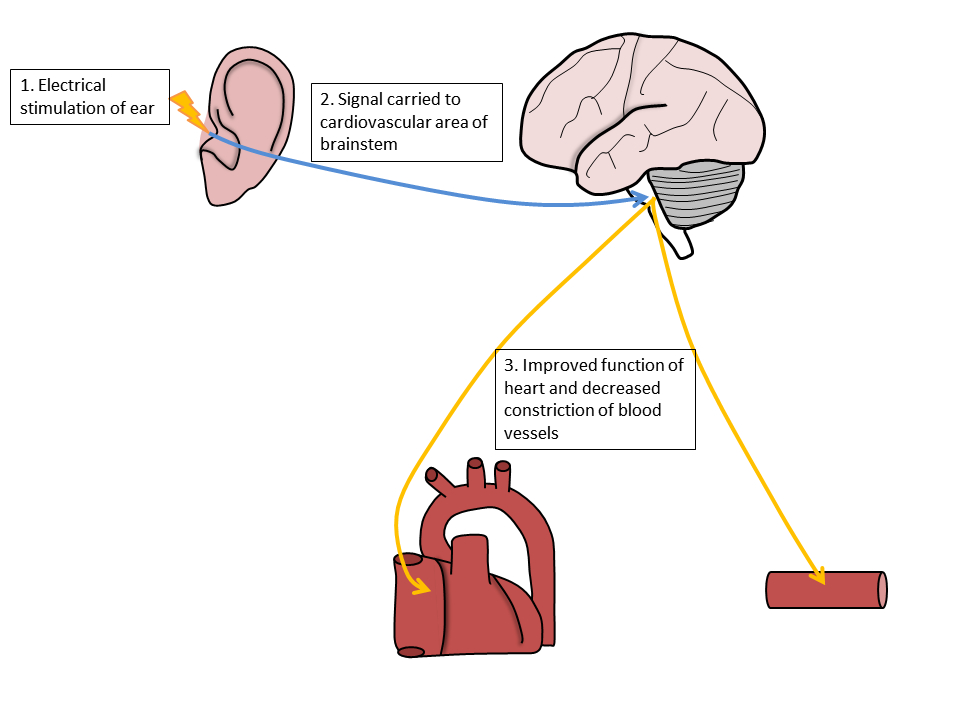 Professor Deuchars said: “We now need to understand how big and how lasting the residual effect on the heart is and whether this can help patients with heart problems, probably alongside their usual treatments. The next stage will be to conduct a pre-clinical study in heart failure patients.”

The research is published in the journal Brain Stimulation and was funded by the University of Leeds.

Professor Deuchars and Dr Clancy are available for interview.