Modern hand dryers are much worse than paper towels when it comes to spreading germs, according to new University of Leeds research.

Scientists from the University of Leeds have found that high-powered ‘jet-air’ and warm air hand dryers can spread bacteria in public toilets. Airborne germ counts were 27 times higher around jet air dryers in comparison with the air around paper towel dispensers.

The study shows that both jet and warm air hand dryers spread bacteria into the air and onto users and those nearby.

The research team, led by Professor Mark Wilcox of the School of Medicine, contaminated hands with a harmless type of bacteria called Lactobacillus, which is not normally found in public bathrooms. This was done to mimic hands that have been poorly washed.

Subsequent detection of the Lactobacillus in the air proved that it must have come from the hands during drying. The experts collected air samples around the hand dryers and also at distances of one and two metres away.

Air bacterial counts close to jet air dryers were found to be 4.5 times higher than around warm air dryers and 27 times higher compared with the air when using paper towels. Next to the dryers, bacteria persisted in the air well beyond the 15 second hand-drying time, with approximately half (48%) of the Lactobacilli collected more than five minutes after drying ended. Lactobacilli were still detected in the air 15 minutes after hand drying.

Professor Wilcox said: “Next time you dry your hands in a public toilet using an electric hand dryer, you may be spreading bacteria without knowing it.  You may also be splattered with bugs from other people’s hands.

“These findings are important for understanding the ways in which bacteria spread, with the potential to transmit illness and disease.”

The research, funded by the European Tissue Symposium, was published in the Journal of Hospital Infection and presented at the Healthcare Infection Society (HIS) International Conference in Lyon, France. 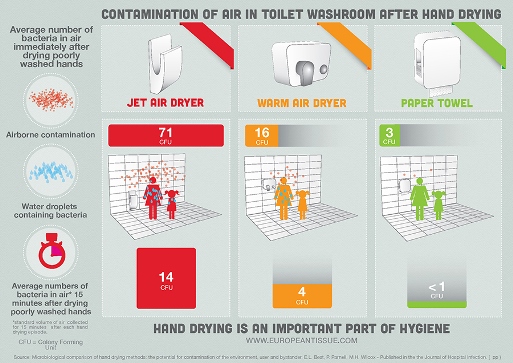 Professor Mark Wilcox is available for interview. Please contact Ben Jones in the Press Office on +44 (0)113 343 8059 or email B.P.Jones@leeds.ac.uk

A copy of the paper “Microbiological comparison of hand-drying methods: the potential for contamination of the environment, user, and bystander” is available from the Press Office.

The infographic illustrating the research is also available.