Researchers have imaged in unprecedented detail the three-dimensional structure of supercoiled DNA, revealing that its shape is much more dynamic than the well-known double helix.

Various DNA shapes, including figure-8s, were imaged using a powerful microscopy technique by researchers at the Baylor College of Medicine in the US, and then examined using supercomputer simulations run at the University of Leeds.

As reported online today in the journal Nature Communications, the simulations also show the dynamic nature of DNA, which constantly wiggles and morphs into different shapes – a far cry from the commonly held idea of a rigid and static double helix structure.

Video: Supercomputer simulations show how the dynamic motion of the supercoiled DNA

Improving our understanding of what DNA looks like when it is in the cell will help us to design better medicines, such as new antibiotics or more effective cancer chemotherapies.

Dr Sarah Harris from the School of Physics and Astronomy at the University of Leeds, who led the computer simulation research side of the study, said: “This is because the action of drug molecules relies on them recognising a specific molecular shape – much like a key fits a particular lock.”

The double helix shape has a firm place in the public's collective consciousness. It is referenced in popular culture and often features in art and design. But the shape of DNA isn’t always that simple. 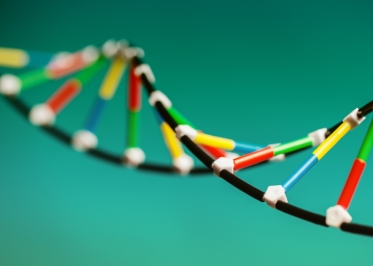 Image: The more recognisable image of the double helix, a description of the molecular shape of a double-stranded DNA molecule.

Dr Harris said: “When Watson and Crick described the DNA double helix, they were looking at a tiny part of a real genome, only about one turn of the double helix. This is about 12 DNA ‘base pairs’, which are the building blocks of DNA that form the rungs of the helical ladder.

“Our study looks at DNA on a somewhat grander scale – several hundreds of base pairs – and even this relatively modest increase in size reveals a whole new richness in the behavior of the DNA molecule.”

There are actually about 3 billion base pairs that make up the complete set of DNA instructions in humans. This is about a metre of DNA. This enormous string of molecular information has to be precisely organised by coiling it up tightly so that it can be squeezed into the nucleus of cells.

To study the structure of DNA when it is crammed into cells, the researchers needed to replicate this coiling of DNA.

Dr Lynn Zechiedrich, the corresponding author for the study from the Baylor College of Medicine, said: “You can't coil linear DNA and study it, so we had to make circles so the ends would trap the different degrees of winding.”

To investigate how the winding changed what the circles looked like, the researchers wound and then unwound the tiny DNA circles – 10 million times shorter in length than the DNA contained within our cells – a single turn at a time.

The researchers devised a test to make sure that the tiny twisted up DNA circles that they made in the laboratory acted in the same way as the full-length DNA strands within our cells, when it is referred to as ‘biologically active’.

They used an enzyme called ‘human topoisomerase II alpha’ that manipulates the twist of DNA. The test showed that the enzyme relieved the winding stress from all of the supercoiled circles, even the most coiled ones, which is its normal job in the human body. This result means that the DNA in the circles must look and act like the much longer DNA that the enzyme encounters in human cells.

Dr Rossitza Irobalieva, the co-lead author on the publication, who conducted the work while she was at Baylor, used ‘cryo-electron tomography’ – a powerful microscopy technique that involves freezing biologically active material – to provide the first three-dimensional images of individual circular DNA molecules. She saw that coiling the tiny DNA circles caused them to form a zoo of beautiful and unexpected shapes.

“Some of the circles had sharp bends, some were figure-8s, and others looked like handcuffs or racquets or even sewing needles. Some looked like rods because they were so coiled,” said Dr Irobalieva.

The static images produced by the cryo-electron tomography were then compared to and matched with shapes generated in supercomputer simulations that were run at the University of Leeds. These simulated images provided a higher-resolution view of the DNA and show how its dynamic motion makes its shape constantly change to form a myriad of structures.

The cryo-electron tomography of the tiny DNA circles also revealed another surprise finding.

Base pairs in DNA are like a genetic alphabet, in which the letters on one side of the DNA double helix only pair with a particular letter on the other side. While the researchers expected to see the opening of base pairs – that is, the separation of the paired letters in the genetic alphabet – when the DNA was under-wound, they were surprised to see this opening for the over-wound DNA. This is because over-winding is supposed to make the DNA double helix stronger.

The researchers hypothesise that this disruption of base pairs may cause flexible hinges, allowing the DNA to bend sharply, perhaps helping to explain how a meter of DNA can be jammed into a single human cell.

Dr Harris concludes: “We are sure that supercomputers will play an increasingly important role in drug design. We are trying to do a puzzle with millions of pieces, and they all keep changing shape.”

The research paper, ‘The Structural Diversity of Supercoiled DNA’, was published online today in Nature Communications.

Caption: The images show the structure of the DNA calculated with the supercomputer simulations (in colour) superimposed upon the cryo-electron tomography data (in white or yellow). (There is no superimposition onto cryo-electron tomography data for the purple figure-8 shape.) You can see that the familiar double helix has been either simply bent into a circle or twisted into a figure-8.

Caption: Supercomputer simulations show how the dynamic motion of the supercoiled DNA causes its shape to change constantly to form a myriad of structures.