A University of Leeds researcher is developing a new eye lens, made from the same material found in smartphone and TV screens, which could restore long-sightedness in older people.

As people age, their lenses lose flexibility and elasticity. This leads to a condition known as presbyopia, common in people over 45 years old, and can require optical aids, such as reading glasses.

Devesh Mistry, a postgraduate research student in the School of Physics and Astronomy, is now working with liquid crystal to create a truly adjustable artificial lens.

He said: “As we get older, the lens in our eye stiffens, when the muscles in the eye contract they can no longer shape the lens to bring close objects into focus.”

“Using liquid crystals, which we probably know better as the material used in the screens of TVs and smartphones, lenses would adjust and focus automatically, depending on the eye muscles’ movement.”

Using these liquid crystal-based materials, Devesh’s research is developing synthetic replacements for the diseased lens in the eye - a new generation of lenses and intra-ocular lens implants to rejuvenate sight. 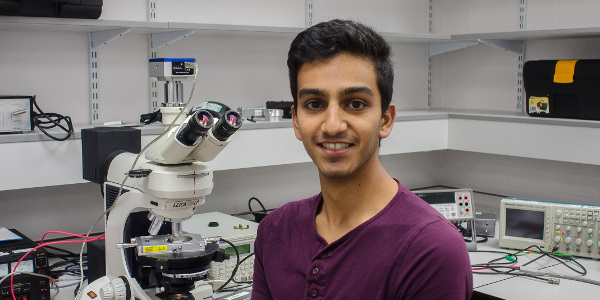 Devesh Mistry, second year PhD student in the School of Physics and Astronomy

Devesh is currently researching and developing the lens in the lab and aims to have a prototype ready by the end of his doctorate in 2018.

Within a decade, the research could see the new lens being implanted into eyes in a quick and straightforward surgical procedure under local anaesthetic.

Eye surgeons would make an incision in the cornea and use ultrasound to break down the old lens. The liquid crystal lens would then be inserted, restoring clear vision.

The lens could also have application in tackling cataracts - the clouding of natural lenses - which affect many people in later life and which can seriously affect vision. A common treatment is to remove and replace the natural lens.

“Liquid crystals are a very under-rated phase of matter,” Devesh told The Times, “Everybody’s happy with solids, liquids and gases and the phases of matter, but liquid crystals lie between crystalline solids and liquids. They have an ordered structure like a crystal, but they can also flow like a liquid and respond to stimuli.”

Devesh is working in collaboration with the Eurolens Research at the University of Manchester and with UltraVision CLPL, a specialist contact lenses manufacturer headed up by two University of Leeds alumni.

His research builds upon previous work by the same collaborators, who developed a prototype contact lens with an electrically-controllable focus using liquid crystals. 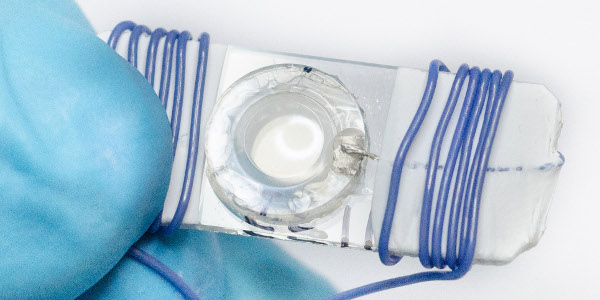 A prototype of an electrically switchable contact lens previously developed by the same group of collaborators. The lens makes use of liquid crystals, a material used in the vast majority of TV and smartphone screens

The first commercially-available liquid crystal lenses could be on sale between six and ten years’ time.

The research is funded by the Engineering and Physical Sciences Research Council (EPSRC) and Ultravision CLPL.

Devesh was recently awarded an Industrial Fellowship from the Royal Commission for the Exhibition of 1851, which awards a range of fellowships and grants to support science and engineering research and industrial education across the UK.

Professor Helen Gleeson, Head of the School of Physics and Astronomy at the University of Leeds and one of Devesh’s academic supervisors, said: “I'm thrilled that Devesh has won the RC1851 Industrial Fellowship. This will support an excellent student working on an exciting project that involves optometry, physics and engineering, helping us to take our research ideas towards a practical device.”

Each Fellow receives up to £80,000 of funding over three years for their work, to be carried out in collaboration with an academic institution and a business partner.

Devesh Mistry is available for interview. Contact the University of Leeds press office on 0113 343 4031 or email pressoffice@leeds.ac.uk

Devesh is beginning the second year of his PhD at the University of Leeds and his research is in collaboration with the University of Manchester and UltraVision CLPL, a company specialising in advanced contact lenses. The research received further funding from the Royal Commission for the Exhibition of 1851.