More than 2,500 researchers and scholars from more than 50 countries are expected to attend the International Medieval Congress (IMC) ­– one of Europe’s largest annual academic gatherings – at the University of Leeds.

The main academic activity takes place on campus from Monday 3 to Thursday 6 July, but a series of public events in Leeds, designed to bring the Middle Ages alive for members of the public of all ages, begins this Sunday 2 July, with a Medieval Day at the Museum, held from noon-3pm at Leeds City Museum.

There will be stories of heroes and monsters, as well as medieval music. Representatives of the city’s Royal Armouries Museum will demonstrate how knights prepared themselves for battle at the free event.

Members of the Stamford Bridge Tapestry Project will demonstrate how they are commemorating a key but sometimes overlooked moment in British history – the 1066 Battle of Stamford Bridge, near York, against an invading Viking army. A Yorkshire tapestry to rival the famous Bayeux commemoration of the Hastings battle later that year is in preparation.

The second key highlight comes next Thursday, 6 July, with the ever-popular Making Leeds Medieval free event held at the heart of campus in and around University Square from 10am-6pm.

This features displays and demonstrations of birds of prey, combat demonstrations, medieval food, drink and crafts. Visitors will also be able to meet some of the historical and archaeological societies working to preserve the history of Leeds and Yorkshire.

Also on campus that day, in Leeds University Union, will be an eye-catching replica of the Iron Throne featured in the hit HBO television series Game of Thrones. Fans of the medieval fantasy epic, which returns to screens on Sunday 16 July, will be able to have their picture taken sat on the replica, which was made by enthusiast Victoria Maclean and is signed by various members of the cast.

In return for their throne selfies, people will be asked to make a small donation to a bursary fund which helps academics attend the IMC. 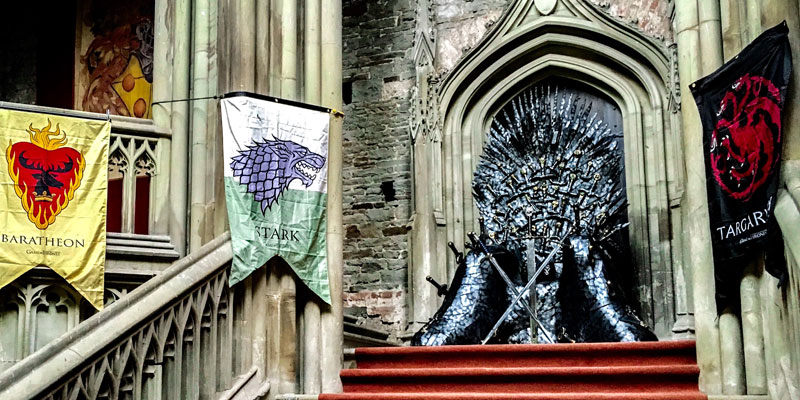 IMC Director Axel Müller said: “As well as welcoming thousands of scholars from all over the world to Leeds for the Congress, we take lots of pleasure in encouraging members of the public of all ages to sample some of the more colourful aspects of medieval life.

“ Most elements in the show’s stories are based on medieval sources.”

“It’s also great to be able to offer something extra this year for Game of Thrones fans to enjoy – after all, most elements in the show’s stories are based on medieval sources.”

The theme for this years’ IMC – the 24th – is “Otherness”. So what does it mean to describe something, or someone, as ‘Other’?

“Having an understanding of what the ‘Other’ meant in the past, and the nature of medieval interactions with the other, says a lot about both modern and medieval society,” said Mr Müller.

“To describe something as ‘other’ is to mark it as being apart from you. It could be a person or social group outside your own community, or even something not entirely human.

“‘Otherness’ has clearly captured the imagination of researchers, with two main elements emerging: how you engage with the ‘other’ when you live or work close to them, and how you view the other – usually from a distance, and those descriptions are often far removed from reality. This year, papers cover topics as diverse as monsters, outlaws and even relations between different cultural and ethnic groups.

“We often think of the Middle Ages as a period without much diversity,” added Mr Müller. “In fact, it was full of complex and fast-changing societies with huge amounts of social interaction. At a point when issues of difference and exclusion seem particularly timely, this Congress will explore the ways in which people have distinguished themselves from certain types of ‘other’ as a way of defining themselves.”

As well as exchanging ideas with peers from around the world, delegates will visit some of Yorkshire’s historic sites and take part in the public events.

Bookworms will be able to dive in to a second-hand and antiquarian bookfair in the Union, or discover some of the latest titles from over 25 publishers exhibiting at the IMC Bookfair in the Parkinson Building.

There will also be chances to indulge in retail therapy at a Medieval Craft Fair on Wednesday, and attend concerts inspired by medieval musical sources on Monday and Tuesday.

The International Medieval Congress provides an interdisciplinary forum for sharing ideas relating to all aspects of the Middle Ages. Organised by the Institute for Medieval Studies at the University of Leeds, since 1994 the IMC has sought to cultivate the field of medieval studies by bringing researchers from different countries, backgrounds and disciplines together, providing opportunities for networking and professional development in an open and inclusive environment. www.imc2017.co.uk