New research has identified the way the body creates its own plaster to try and prevent bacteria and other micro-organisms from penetrating open wounds.

Scientists have found that a protein film forms rapidly over a wound as part of the natural clotting process, and it provides protection for at least 12 hours.

They believe this bio-film gives the immune system time to marshal its defences to deal with any infection.

“...the film acts like a plaster, a protective barrier to try and prevent microbes from entering the body where the skin is broken.”

The researchers also observed that oil-based substances disrupted the process and warn that treating breaks in the skin with petroleum jelly, a technique used in some contact sports and following minor surgery, may increase the risk of infection.

The study, involving an international collaboration of scientists led by the University of Leeds and part-funded by the British Heart Foundation, changes scientific understanding of the mechanism of blood clotting.

The research is published in the Journal of Clinical Investigation.

Clotting is a vital process to prevent life-threatening blood loss following an injury. At the site of the wound, platelets and red blood cells clump together to try and plug any haemorrhage.

Seen through an electron microscope, clots appear to be meshed together by spaghetti-like fibres of a protein called fibrin. For decades scientists have been baffled about the precise structure of the fibrin fibres because they seemed to be never-ending, just coiling themselves around the platelets and red blood cells. 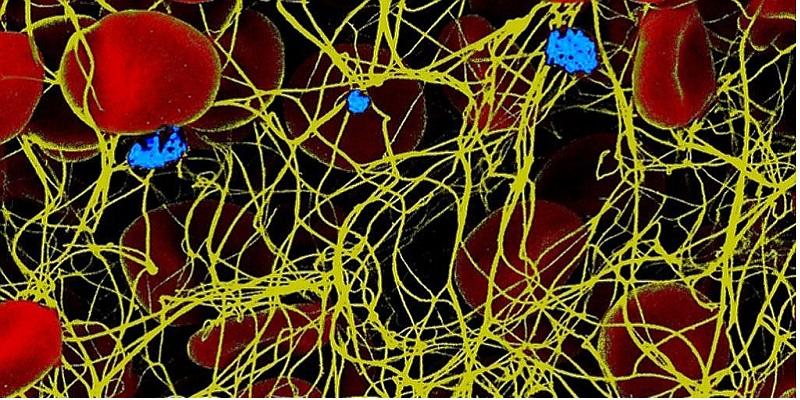 The fibrin fibres (yellow) coil around red blood cells (red) and platelets (blue) in a clot. The fibres appear to be never-ending.

By using powerful imaging techniques, the Leeds researchers found that the fibrin fibres were nature’s shape-shifters, reorganising their structure from a fibrous network into a sheet-like film at the point the clot comes into contact with air, at the site of the open wound. 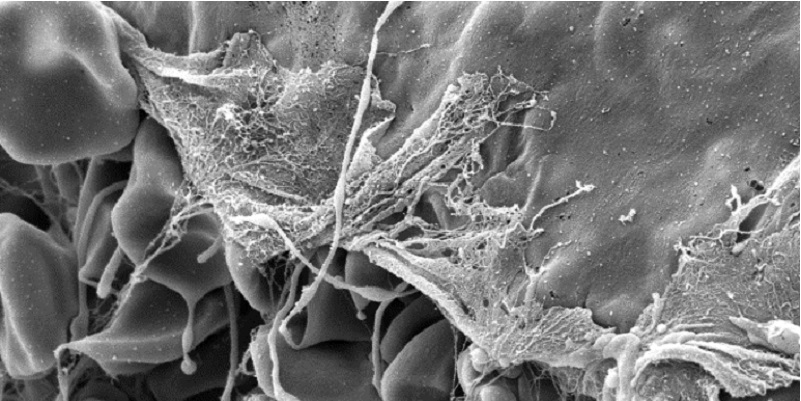 Where the fibrin fibres come into contact with air, they change shape from spaghetti like strands into a flat film that covers the surface of the clot.

The electron microscope images also revealed that the film had ‘breathability’ properties, allowing air to reach the wound through tiny pores which were too small to allow bacteria and some viruses to pass through.

The research involved both human and animal tissue.

Professor Robert Ariëns, from the Leeds Institute of Cardiovascular and Metabolic Medicine, who supervised the study, said: “Our hypothesis is the film acts like a plaster, a protective barrier to try and prevent microbes from entering the body where the skin is broken.

“We did laboratory and animal studies which showed this film could be a barrier against microbial infection for at least 12 hours, and this gives the immune system time to get white blood cells to the wound to counteract any infection.

“The study is reshaping our understanding of blood clotting. Not only do clots stem blood loss, they also provide a frontline defence against infection.

“Understanding exactly what happens at the end of fibrin fibres has been a question medical scientists have been trying to answer for years now. This study is providing that long overdue explanation.”

The paper reveals that scientists using electron microscopes had previously seen a thin film on top of clots but they believed it was the result of the way the sample was prepared for examination.

The researchers also noticed that if oil was applied to the clot it would perforate the protective film and they warn that the common practice of applying petroleum jelly to a wound would increase the risk of infection. 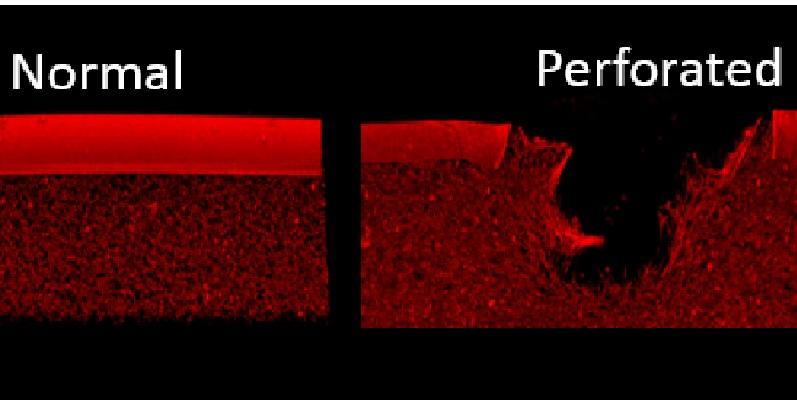 A perforation in the protective biofilm caused by the presence of an oil-based substance such as mineral oil or petroleum jelly.

Professor Jeremy Pearson, Associate Medical Director at the British Heart Foundation, said: “By looking at how blood clots form, with a view to designing better clot-busting drugs to treat heart attack patients, this team have now discovered a previously unknown protection mechanism used by our bodies to prevent infection after an injury.

“This discovery perfectly portrays the complex, and sometimes contradictory nature of our bodies, in that the very substance which can make blood clots inside our body so dangerous can also protect us from harm when we wound ourselves.”

Journalists should contact David Lewis at the University of Leeds press office on 0113 343 8059 or d.lewis@leeds.ac.uk